Janet Yellen, the US Treasury secretary, urged Congress to stick to the White House’s plan to pay for its $4.1tn investment plans with higher taxes, arguing the country needed to contain US deficits over the long term.

Speaking on Sunday, Yellen defended Joe Biden’s attempt to impose higher levies on companies and the wealthiest Americans in order to fund $2.3tn in infrastructure spending and $1.8tn in social programmes over the next decade, after criticism from Wall Street, corporate America, and Republican lawmakers.

But Yellen went a step further, saying that it was important to offset the cost of the Biden administration’s spending plans in order to keep America’s fiscal position from worsening. With Republicans ardently opposed to any tax increases, and some Democrats wavering on the scale and details of the tax rises, some lawmakers may be tempted to strike a compromise that includes very limited revenue increases.

“I think we’re in a good fiscal position. Interest rates are historically low. They’ve been that way for a long time, and it’s likely they’ll stay that way into the future. But we do need fiscal space to be able to address emergencies, like the one that we’ve been in with respect to the pandemic,” Yellen told NBC on Sunday.

“We don’t want to use up all of that fiscal space and over the long run deficits need to be contained to keep our federal finances on a sustainable basis. So, I believe that we should pay for these historic investments,” she added.

Yellen’s comments came as the Biden administration is preparing to launch negotiations with Congress to see if an agreement can be reached on its sweeping economic agenda, which comes on top of the $1.9tn stimulus plan that was passed in March.

Biden is expected to travel to Virginia and Louisiana this week to promote his case for the economic plans to the American public, in the wake of his joint address to Congress last week that focused heavily on them. 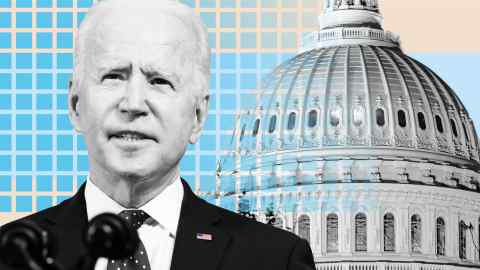 On the infrastructure plan, which the White House unveiled more than a month ago, Republicans have made a counter-offer worth $568bn in spending, and the party’s lawmakers have suggested an increase in user fees to pay for at least a portion of the plan, though many Democrats are sceptical.

“There are ways to get there,” Rob Portman, the Republican senator from Ohio, told NBC. “We’ve got some phone calls scheduled this week. I met with the White House late last week. There’s a way forward here if the White House is willing to work with us.”

Ron Klain, the White House chief of staff, said he was confident that an agreement could be reached, saying Biden’s two “red lines” in the talks were that taxes would not rise on anyone earning less than $400,000 a year, and “inaction” was not an option.

“We have time to talk to people in both parties, find where the common ground is, find what people agree as mutually shared interests. I’m optimistic that we can make progress on that in the weeks ahead,” he told CBS.

Biden’s push comes as the US economy is accelerating rapidly out of its winter slump, thanks to a quick vaccination rollout and the impact of the stimulus bill. Some economists and Republican lawmakers have expressed concern that Biden’s further fiscal plans risk overheating the US economy, but Yellen brushed those aside.

She said the new spending would occur after the stimulus funds were already spent, and the “boost to demand is moderate” because it would be spread over eight to 10 years.

Yellen also said the Federal Reserve had the ability to address any spike in inflation. “We will monitor that very carefully,” she said. “We are proposing that the spending be paid for. And I don’t believe that inflation will be an issue, but if it becomes an issue, we have tools to address it. These are historic investments that we need to make our economy productive and fair.”

From Vaccines to V-Shaped Recovery in Europe

Jessica Simpson Threw Away Her Scale, Has ‘No Idea’ What She Weighs