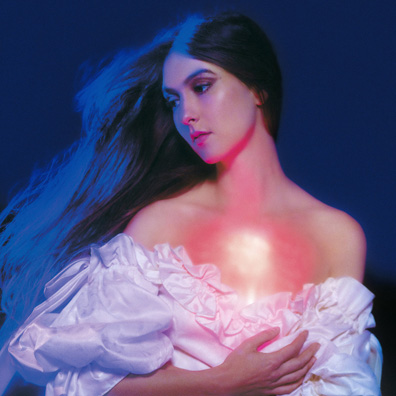 And In the Darkness, Hearts Aglow

On 2019’s Titanic Rising, Natalie Mering of Weyes Blood echoed a hurting world as she poured out her fear of loneliness, desire for love, and need to belong over grand swells of cinematic folk-pop. Her yearning heartache—expressed with deep spirituality rather than mere romanticism—resonated with many, and yet, Mering caveats her feelings on the song “Everyday,” singing, “Then again, it might just be me.” She qualifies the importance of her insights, wondering if she can trust her read on humanity or if she’s just projecting herself on her surroundings. But subsequent years of universal loneliness would prove Mering’s concerns unfounded. Her perception is true, and she lets it run free on her new album, And In the Darkness, Hearts Aglow, where she opens with the essential answer to her previous self: “It’s not just me, it’s everybody.”

It can be dangerous for someone with a strong prophetic voice like Mering to speak for “everybody.” Yet the authority of lines like, “Living in the wake of overwhelming changes/We’ve all become strangers” or “We know that we’re not free/Even though we wanna be free” or “It feels like we’re burning/Makin’ ashes of our joy” feels earned. It can be equally dangerous to eschew optimism in favor of eschatalogical claims like, “They say the worst is done/But I think it’s only just begun,” especially in a world desperately trying to end some of the worst years many have experienced. But Mering is no fire and brimstone preacher making doomsday predictions. Instead, by situating herself within a universal “We” (a pronoun used a staggering 51 times across the album), Mering has made a hopeful case for our communal interdependence.

Musically, In the Darkness is perhaps her grandest, most elegant work to date—a perfect culmination of her past experimentalism and deep devotion to graceful melodies that lift from the deepest parts of the soul up to the heavens. The droning meditation that closes “God Turn Me Into the Flower” or the Pet Sounds-like mix of melancholy and elation on “Children of the Empire” feel like Mering is lovingly embracing the listener, reminding them that all we’ve experienced since 2019 is meaningful. That our brokenness isn’t in vain. That every act of togetherness is an image of a greater future. Even if the worst is yet to come, Mering’s music reminds us that community, empathy, and beauty have revolutionary power that glows unfadingly in any darkness. (www.weyesblood.com)

‘She was never spoken of again’: Bono recounts his mother’s death in new memoir | Bono