The Pitch: If you don’t live under a rock, chances are you’ve heard of Chippendales: the elegant, trailblazing first-ever all-male strip-tease troupe that has been bringing delightfully scandalous thrills to audiences since the 1970s. What you may not know, however, is that the burlesque’s history is brimming with conspiracy, racketeering, arson, and murder.

Over the course of 10 episodes, Welcome to Chippendales, Robert Siegel’s limited series based on K. Scot Macdonald and Patrick MontesDeOca’s 2014 literary exposée Deadly Dance: The Chippendales Murders, shrewdly examines and unravels the club’s shocking, harrowing history. The show rigorously dissects the troupe’s inception, rise to fame, and subsequent descent into the deepest, most gruesome bowels of corruption.

A Killer Strip Tease: One of the slightly miraculous things about Chippendales, which makes it stand out in the vast crowd of true-crime content, is that the show’s stranger-than-fiction crime plots almost feel secondary to its success. Indeed, even without the murders and the hitmen, the club’s origin story is undeniably a marvel in its own right.

Chippendales centers around Los Angeles-based Somen “Steve” Banerjee (Kumail Nanjiani), an Indian emigrant who is dead-set on chasing the American Dream until the bitter end. With savings from his gas station attendant job, he opens up a backgammon club, which gains no traction until he decides to turn it into the first-ever all-male strip-tease.

With the help of choreographer Nick De Noia (Murray Bartlett), accountant — and later Steve’s wife — Irene (Annaleigh Ashford), and costume designer Denise (Juliette Lewis), Chippendales quickly skyrockets to worldwide popularity. And even before corruption bleeds into the cracks of the beloved club, this success is a wildly compelling watch. Indeed, Chippendales takes the popular rags-to-riches format and squeezes every ounce of entertainment out of it.

A Magnetic Start: For its first couple of episodes, Siegel ensures that Chippendales has the electric energy needed to get viewers rooting for the success of Steve and Co. Montages of the club expanding in demand are cut together with nimble editing, which seamlessly allows Chippendales’ popularity to grow and grow and grow through dizzying whip pans and dissolve-cuts of growing crowds, until it feels like each scene is a balloon on the verge of popping. Further inspiring a thrill in these montages are sparkling earworm disco tracks that fill each moment with a buzzy sense of excitement. 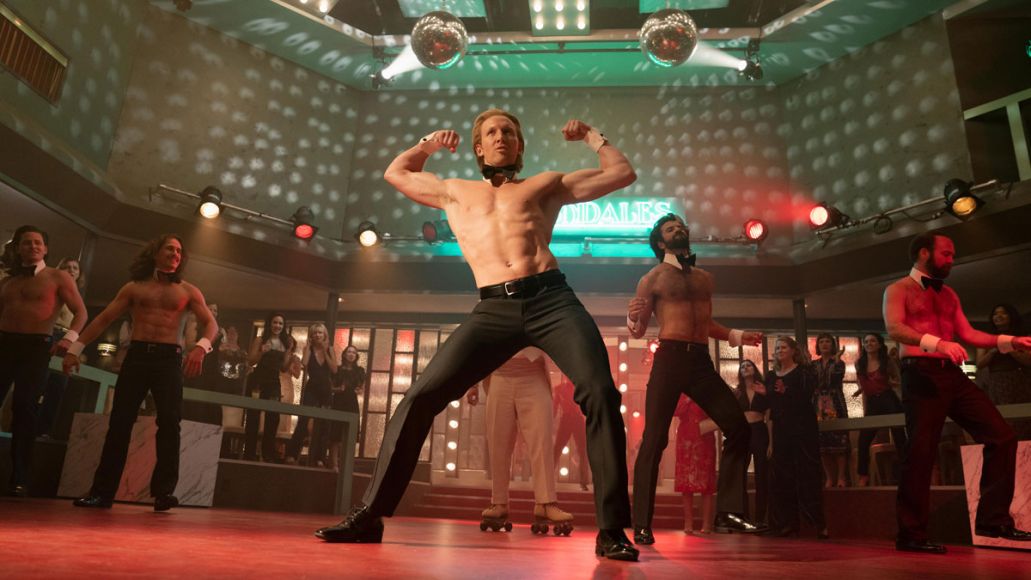