Welcome to Kpopmap’s brand new weekly series, “Weekly K-Pop Ranker” where we rank the best Korean music releases from the week. This includes music released by any and all artists such as K-Pop groups, soloists, bands, K-Hip Hop artists, indie artists, and more. It is also inclusive of foreign language releases from K-Music artists as well as OSTs.

The timeline in consideration for each article will be the span of 7 days, from Fridays to Thursdays. The Weekly Ranker article will be published every Friday. In the case of this article, we will look at releases from 26th August 2022 to 1st September 2022.

Note: This ranker will not be based solely on the commercial success or popularity of the releases. However, we will open a poll at the end of each article where you can vote for the best release of the week. The best releases from each week will be compiled in a monthly article based only on your votes.

Here are the top 5 K-Pop releases from the 5th week of August!

Taking over the top spot in this week’s K-Pop ranker is TWICE with their latest release ‘Talk That Talk’, serving as the title track for their 11th mini album “Between 1&2”. It’s a great week to be a K-Pop fan because TWICE is bringing us all the newtro goodness we could have asked for. Not only is ‘Talk That Talk’ catchy, visually dazzling and conceptually iconic but it is also classic TWICE and we love to see it.

In second place, we have ‘Sexy Nukim’ by Balming Tiger and BTS’ RM. We couldn’t have imagined a more extraordinary artistic fit than Balming Tiger and RM, especially when it comes to their sonic aesthetic and worldview. The dark and gritty undercurrent of the song, coupled with the unbelievable rap, is an absolute treat and a musical feat that is beyond comparison.

SHINee’s Key is back with the loudest bang, and we’re obsessed! His second solo album “Gasoline” accompanied by a lead single of the same name, dropped this week and created quite the wave all over the world. Besides the grandeur of scale, ‘Gasoline’ is a power anthem in the truest sense of the word and hits harder than ever. This is Key in his element, and it is magnificent.

When it comes to his solo music, Lee JinHyuk has always delivered releases that reinstate his position as an ace in K-Pop over and over again. JinHyuk is a complete rockstar in ‘Crack’ and he knows it too! The vibe is simply immaculate with this one. Singing rap is his forte and no one does it like him. ‘Crack’ definitely has a chokehold on us and we’re not complaining!

Finally, we have a fresh, peppy, Brit-pop-inspired dance track by TEMPEST that will get you grooving in no time. The vocals are out of this world and a delight to listen to. This song could truly could lift your spirits on a blue day. The bright optimism of the song wonderfully translates into the vivid colours of the music video, which is what makes ‘Can’t Stop Shining’ a complete package. 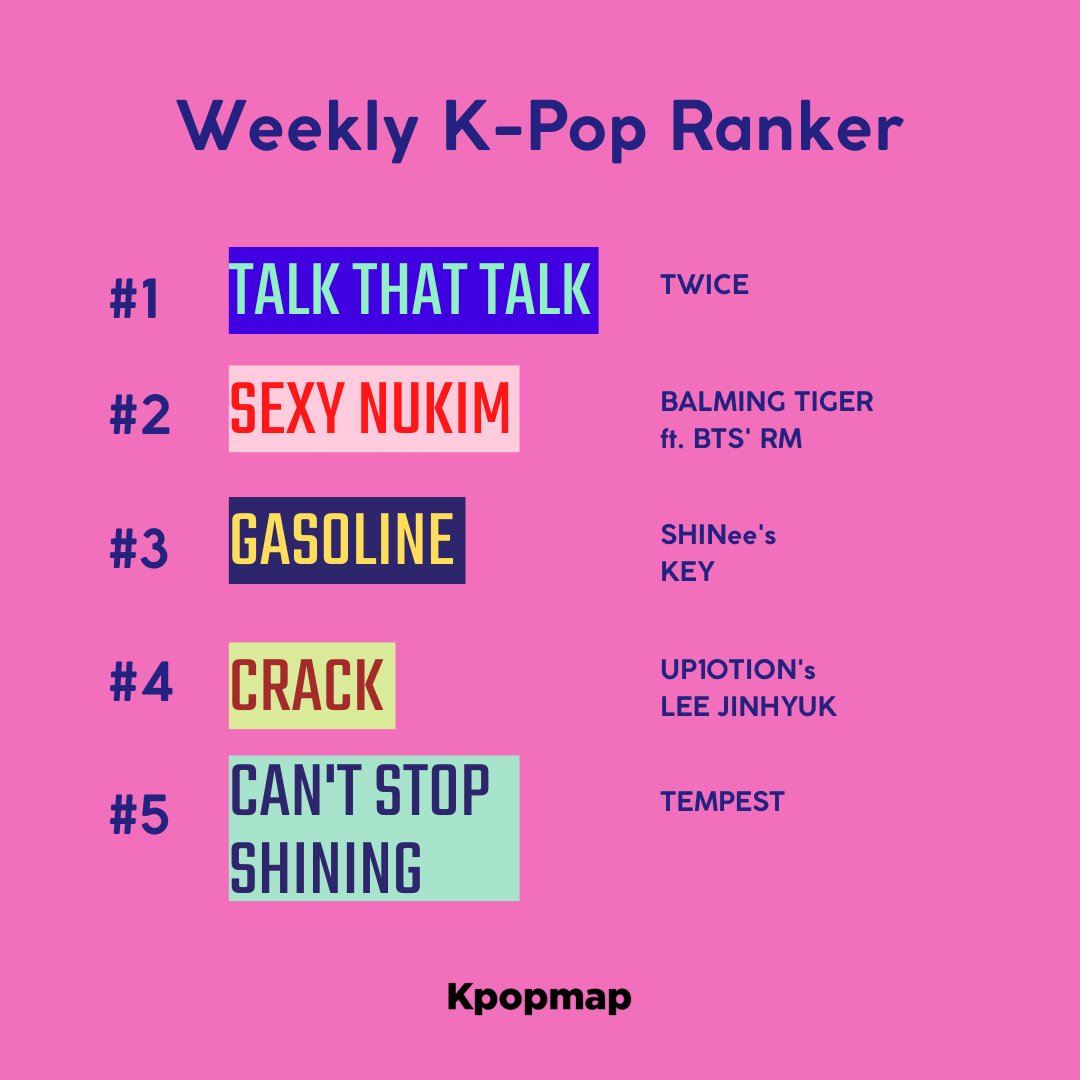 What was the best K-Pop release from the 5th week of August?

A guide to your weekend listening and viewing : NPR

BTS’s V Is Being Praised By ARMYs And Korean Media For...