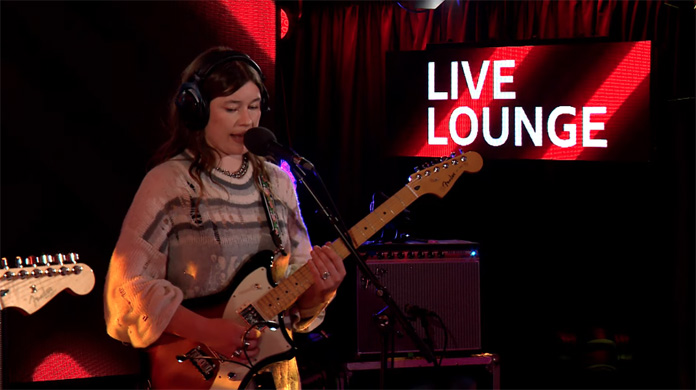 Wet Leg Out Now via Domino

The British duo (Rhian Teasdale and Hester Chambers) released their self-titled debut album in April via Domino. The album was nominated for the Mercury Prize (the ceremony is tonight, so we’ll find out soon if they’ve won).

“Bad Habit” is taken from Lacy’s recent sophomore album, Gemini Rights, which came out in July via RCA. The single has made it to #2 on the Billboard Hot 100 chart.

In July, Wet Leg did a “Like A Version” session for Australian radio station triple j where they covered “Smoko,” a song by Aussie band The Chats, and also performed their own song, “Ur Mum.”

In June, Wet Leg performed to a huge crowd at Glastonbury. Watch them perform their viral hit “Chaise Longue” at the British festival here. The band recently revealed in an interview with Absolute Radio’s Ben Burrell, backstage at the Isle of Wight Festival, that they had already completed their second album. In May, Wet Leg performed two songs (“Wet Dream” and “Ur Mom”) on the BBC music show Later… with Jools Holland.

In May, Pop superstar Harry Styles covered Wet Leg’s 2021 single “Wet Dream” in a session for BBC Radio 1’s Live Lounge. Wet Leg will be supporting the British singer when he tours Australia and New Zealand next year.

How to Get Tickets to Adam Sandler’s 2022 Tour

Also in May we posted a disturbing and hilarious parody cover of Wet Leg’s 2021 hit “Chaise Longue” by a band calling themselves Moist Limb. Moist Limb’s version is titled “Trone Noir” and is accompanied by a video that remakes the “Chaise Longue” video in horror movie mode (hearts are eaten). “Trone Noir” translates to “Black Throne.”

Read our 2021 interview with Wet Leg on “Chaise Longue.”

Read our recent interview with Wet Leg on their album here.

Then the duo did a Tiny Desk (Home) Concert for NPR, performed “Chaise Longue” on Late Night with Seth Meyers, and stopped by SiriusXMU to perform a cover of Madonna’s “Material Girl.” Then in March Wet Leg stopped by The Tonight Show Starring Jimmy Fallon, where they performed “Wet Dream” on the broadcast show and “Chaise Longue” as a web-exclusive.

Wet Leg released one last pre-release single, “Ur Mum,” via another amusing video. “Ur Mum” also made our Songs of the Week list. Then the band shared a “Live on the Porch” session featuring them performing five songs from the album in their native Isle of Wight.

Com Truise at The Get Down on Oct. 1st / Preview