Fan-filmed video of W.A.S.P.‘s November 15 performance at Rams Head Live! in Baltimore, Maryland can be seen below.

W.A.S.P. performed the song “Animal (Fuck Like A Beast)” live for the first time in more than a decade and a half at the opening concert of the group’s 40th-anniversary tour on October 28 at the House Of Blues in Las Vegas, Nevada.

More than a decade ago, W.A.S.P. mainman Blackie Lawless, who is a born-again Christian, said that he would “never” play “Animal” again, explaining that it was “totally because of [his] religious faith.” He added at the time: “I don’t want 13-year-olds going around singing that song. If that’s something they wanna do later in their life, that’s their business. But, like I said, it’s a question of faith and the religious conviction that I have.”

Earlier last month, in an interview with “Chris Akin Presents”, Blackie addressed the possibility of bringing back the song for the upcoming W.A.S.P. run of shows. He said: “I don’t wanna go into detail about it right now. I’ll just say it’s being discussed. But if we did it, it’s gonna be different than people might expect. And what I’m talking about is from a visual perspective. And this idea has only just surfaced in the last couple of weeks. And again, I won’t go into what it is, but it brought up a very interesting idea of if it was played how it could be approached. So I’ll just leave it at that for now.”

In September, former W.A.S.P. guitarist Chris Holmes, who played on the original recording of “Animal (Fuck Like A Beast)”, stated during a question-and-answer session in Toronto about the prospect of W.A.S.P. performing the song live again: “Blackie says now [he won’t play the track] because of religious beliefs, so I think he should change the title to ‘I Fuck Like A Priest’.” He added: “I don’t know, but that’s what I was thinking.”

Blackie previously touched upon the chances of performing “Animal (Fuck Like A Beast)” again during a January 2022 interview with SiriusXM‘s “Trunk Nation With Eddie Trunk”. Asked why he dropped “Animal” from W.A.S.P.‘s live set in the first place, Lawless said: “Two reasons. Number one, my religious convictions. [Because of] my Christian faith, I thought, ‘Well, this is not really something that I wanna say.’ But also, there was another reason as well. We were doing more serious material. Do you really want that conflict of messaging going on at the same time. So there was a two-fold reason for it.

“We haven’t played that song in quite some time; it’s probably going on 15 years now,” he continued. “But however long it’s been, I think I made my point. So we’re in the process of… We’re discussing [the possibility of bringing it back]; let’s put it that way.”

Prior to his January 2022 appearance on “Trunk Nation With Eddie Trunk”, Lawless discussed his decision to stop performing “Animal (Fuck Like A Beast)”in a 2015 interview with Classic Rock. He said at the time: “At the time I came back to my faith, I said, ‘That’s it. I can’t stand up on a stage and say this.’ There’s a verse in The Bible that says: ‘Let no corrupt speech come from your mouth.’ Between me and you and the fencepost, that song was put into my life for a reason — for me to create the fervor that it did with the PMRC and make the band a household name, and then for me to announce to the world that I would never play the song again.”

He added: “I tell people now, the silence of it is deafening. It’s worked like a charm.”

“Animal (Fuck Like A Beast)” was originally intended to be the opening track on W.A.S.P.‘s self-titled 1984 debut album, but was dropped before the album’s release, although it appears as a bonus track on the 1998 reissue. Written by Lawless, the song was deemed too controversial, with W.A.S.P.‘s then-record label, Capitol Records, not wanting to risk the album being banned from major retail chains. The single was shelved until the band was able to strike a one-off publishing deal with the independent label Music For Nations. The single was finally released in April 1984, complete with the original sleeve and art depicting a codpiece and a circular saw blade.

Joining Lawless in W.A.S.P.‘s current lineup are bassist Mike Duda and guitarist Doug Blair, who have been in the band 26 years and 18 years, respectively, along with drummer extraordinaire Aquiles Priester.

During an appearance on a recent episode of “The Ron Keel Podcast”, Lawless spoke about what fans can expect to see on W.A.S.P.‘s 40th-anniversary tour. He said: “Well, in ’86 we did a record called ‘Inside The Electric Circus’. And I had, as a kid… I was born in Tampa [Florida]. Before I moved to New York when I was seven, in Tampa, there’s an area there that’s just south of Tampa called Gibsonton. And Gibsonton is an area where a lot of people from the circus go in the off seasons in winter there. So I grew up — literally — around seeing circus people. As a matter of fact, where we lived, there was a family that were trapeze artists. And when I was a little kid — like, when I was five — I’d walk over there and I’d watch ’em rehearse. And I was fascinated by it. So the whole idea of the circus has been something that’s really been part of my makeup. So we visited this in ’86. But what happened is when we were moving into playing arenas… What I originally wanted to do was more like an old-fashioned 1930s carnival. But because we were moving into bigger venues, everyone said, ‘Well, it’s not big enough. It’s not flashy enough. It’s gotta be bigger. It’s gotta fill up those rooms.’ So what we ended up doing was a much more flashy production. And it was good, but it was not my original idea. So I’m getting an opportunity now to go back and do this thing that looks like a 1930 carnival, but this is a dark carnival. And dark in the sense that when we first started, and [we were] making the demos, one day we were in the studio and something happened and a piece of gear broke down and we had to take a few hours off. And so there was a movie theater across the street and ‘Road Warrior’ was playing there. And so we said, okay, we wanted to see the movie, so we went over and watched it. And I was absolutely riveted to it. And I remember thinking, ‘All right. If we go out and we do this stuff live, this is what we’re gonna look like; this is what we’re gonna feel like.’ And the whole idea, when we wearing the pants that had no backs in ’em and all that stuff, all that came from the ‘Road Warrior’. We thought for sure we would get busted on this, and we were waiting for those questions. And we never once got busted on it, and we couldn’t believe it. [Laughs] Because we stole our whole act from that movie — the girl on the rack; all that stuff came from that movie. So if you can imagine today an old 1930s kind of sideshow, dark carnival-slash-‘Road Warrior’, that’s what this is gonna look like.”

In a separate interview with Metal Edge magazine, Lawless was asked how he plans to stage a “real-deal W.A.S.P. show” to celebrate the band’s 40th anniversary “with the existence of cancel culture and woke culture.” He responded: “That’s a complicated question you just asked. Because first of all, I’m not gonna even consider a woke culture. That has nothing to do with my world. You know, if that’s what somebody wants to do that’s their privilege. Free country. But our fan base is our fan base. So, one of the things I learned a long time ago is that if you’re going to have a genuine career… And when I say a real career, I’m talking about somebody that does it for a lifetime, I’m not talking about somebody that just makes records. And that’s okay, too. In the pop world, that’s fine. You know, that’s what people want. But if you’re going to have a genuine career, I’m not talking about somebody that’s around for five years, or 10 years. I’m talking about somebody who’s around 20 years, 30 years, longer. What you’re saying, in effect, is you’re going to take that fan base on a lifelong ride. And if you’re going to do that, you have to have an intimate relationship with them. And if you don’t have that intimate relationship, they will never feel like they know you.

“You’ve got to be willing to crack your skull open, and let them come inside and walk around barefoot, inside your head,” he continued. “You really do. And the only way you can do this is with lyrics. We can do interviews like this, and it helps considerably. I mean, people get to know you a lot that way. But the lyrics are where they’re really gonna get to know you. Because that’s what they’re listening to most of the time. And so to do that, you’ve got to be willing to share parts of yourself that a lot of artists just aren’t willing to do. Let them get in there, into the nooks and crannies, and find the good and the not so good.

“So, to get into a culture that is doing that, that would do me no good, because I’m talking to specific people out there. First of all, our type of music, whether it’s us or anybody else in our genre, we are a subculture. We’re not mainstream. We’re not the pop world, which is 50 percent of the market. We’re a smaller market, like, you know, 25 to 30 percent of that potential pie that’s out there. It’s not going to do me any good to try to talk to people that aren’t going to listen anyway. My whole thing is to try to identify what it is I’m thinking and feeling at the moment. Because I, too, like everybody else, my opinions are gonna change from time to time.

“And so the idea is, when you take people on that lifelong ride, they look at what you wrote 30 years ago, and they go, ‘Oh, wow, look what he was thinking,'” Blackie added. “And they listen to something, whatever the last thing was that came out, and they go, ‘Oh, wow, look at how he’s thinking now.’ So this is that intimacy, where you take people and you’re literally communicating with them over the course of this journey. So, trying to do anything from a standpoint of being influenced socially would do me no good. Or anybody like me that does this. You have to be true to yourself. I mean, we got into this not giving a damn about what people thought so why should it be any different now?”

W.A.S.P. recently postponed its European 40th-anniversary tour, originally scheduled for spring of 2022, until the spring of 2023. The new dates will take place in March, April and May of 2023. All tickets previously purchased for the 2022 tour will be valid at the rescheduled 2023 shows. 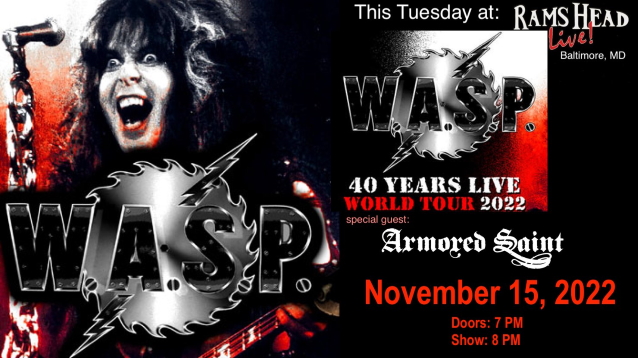