To celebrate his new “Patient Number 9” album, Rock And Roll Hall Of Fame inductee and Grammy-winning singer and songwriter Ozzy Osbourne took part in a special in-store appearance and signing at Fingerprints Music in Long Beach, California on Saturday, September 10, the day after the LP’s release. Attendees needed to pre-order a copy of “Patient Number 9” to attend the event as Ozzy only signed copies of the new album. In order to sign as many copies as possible, the new album was the only item signed. Masks were required for all attendees and no photos with Ozzy were permitted.

Video and photos of yesterday’s event can be seen below.

The “Patient Number 9” title track was written by Ozzy, Watt, Robert Trujillo (METALLICA),Chad Smith (RED HOT CHILI PEPPERS) and Ali Tamposi and features a riveting solo from legendary guitarist Jeff Beck. The accompanying music video marks the first collaboration from the project with artist and comic book creator Todd McFarlane. It is highlighted by McFarlane‘s signature illustrations interspersed with live Ozzy vignettes in the role of “Patient Number 9,” which the revolutionary creative force in the world of comics and toys also filmed. In addition, this is the first-ever video to incorporate Ozzy‘s artwork: his hand-drawn demons were animated and can be seen during the Jeff Beck solo in the song.

Working with producer Watt for the second time, Ozzy welcomed a dynamic A-list supporting cast. The record boasts guitarists Beck, Eric Clapton, Mike McCready of PEARL JAM, and longstanding righthand man and six-string beast Zakk Wylde who plays on the majority of the tracks. For the bulk of the album, Chad Smith of RED HOT CHILI PEPPERS held down drums, while the late Taylor Hawkins of FOO FIGHTERS made an appearance. Old friend and one-time Ozzy bandmember Trujillo plays bass on most of the album’s tracks, with Duff McKagan of GUNS N’ ROSES and Chris Chaney of JANE’S ADDICTION supplying bass on a few songs. For the first time ever, BLACK SABBATH co-founder, guitarist and riff lord Tony Iommi appears on an Ozzy solo album.

As previously reported, Ozzy performed at halftime of the Los Angeles Rams season opener this past Thursday (September 8) at SoFi Stadium.

Fans in the stadium were treated to a multi-song medley from Osbourne while viewers at home saw a portion of the performance on NBC and Peacock during halftime.

Prior to the the halftime show, the 73-year-old Ozzy last performed in August when he made a surprise appearance at the closing ceremony of the Commonwealth Games in his former hometown of Birmingham, England.

Ozzy publicly revealed his Parkinson’s disease diagnosis in January 2020. And although he still struggles with walking, his symptoms are said to be quite mild.

In 2019, Ozzy suffered a fall at his Los Angeles home while he was battling pneumonia.

Ozzy recently said that he believes he has one final tour left in him.

“I’m saying to you I’ll give it the best shot I can for another tour,” he told the Observer last month. “You have not seen the end of Ozzy Osbourne, I promise you. If I have to go up there and die on the first song, I’ll still be back the next day.”

Last week, Ozzy and his wife/manager Sharon announced their return to TV with a 10-part reality series called “Home To Roost”. Set to air on BBC One and iPlayer, the show will document the Osbournes‘ journey back to Britain, alongside daughter Kelly and son Jack‘s efforts to support them.

Ozzy has sold over 100 million records, is one of a handful of artists who has had Top 10 albums in last six decades, received induction into the Rock And Roll Hall Of Fame as a co-founder of BLACK SABBATH, won three Grammy Awards, earned the Ivor Novello Award for Lifetime Achievement from the British Academy of Songwriters, Composers, and Authors, set a Guinness World Record, and claimed real estate on the Hollywood Walk Of Fame and Birmingham Walk Of Stars. He’s played for royalty (even the Queen of England) and dignitaries around the world, interacted with presidents and performed to millions of devoted fans on five continents. Earlier this year, Ozzy‘s CrytoBatz NFT launched as one the biggest Celebrity NFT project ever created; it’s currently ranked in the top 100 biggest NFT projects ever and is valued at over $40 million.

#THRONGS Of People Waiting In
Line @ The Ozzy Osbourne In-Store
Today In Long Beach 🏖 ✊🏽👊🏽🤘🏽
I Had Forgotten About It & Had To
Hit The Market , Which Come Find
Out Was Feets Away 🥴🥴🤣

Posted by Livemusictoday.com on Saturday, September 10, 2022

The Prince of Darkness in Long Beach? Yes he was. Ozzy Osbourne was at an In-Store signing appearance at Fingerprints…

Had to pleasure meeting the Prince Of Darkness Ozzy Osbourne today and got his new album signed at Fingerprints in Long Beach! 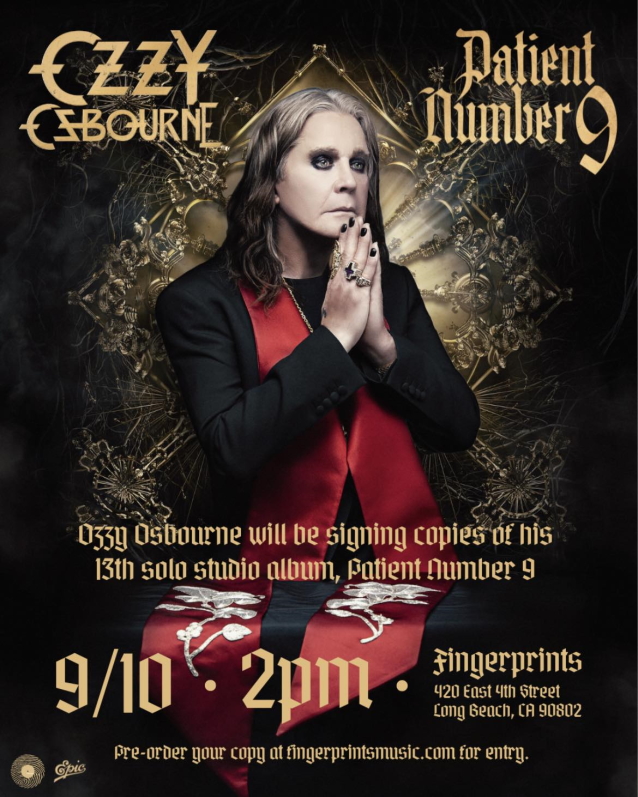