Fan-filmed video of GHOST‘s entire September 9 concert at CURE Insurance Arena in Trenton, New Jersey can be seen below.

The band’s setlist was as follows:

In a recent interview with AL.com, GHOST mastermind Tobias Forge was asked why his band was able to break through commercially at a time when pop, R&B and rap acts dominate. He replied: “I think there are various reasons. And it all combined in alignment, sort of created the sum of our career. But I think our sound and our way of not writing the same record every time, but still having a signature DNA in it has helped. I think it has helped we have consistently tried to bring a show to the people.”

He continued: “It defies logic for a lot of bands, I think, to try to expand beyond their means. But that was aided by the fact that I was the only one that invested and everybody else was paid. [Laughs] If we had people voting on everything, it would not have happened this way. Because I was so determined that, yeah, I want to be what METALLICA was in the ’80s, on the ‘…And Justice For All’ tour. That sort of band or like ‘Powerslave’ with IRON MAIDEN. That sort of fucking theater and playing arenas. And I’ve always been very, very influenced by PINK FLOYD and THE ROLLING STONES. As much as I’m a sucker and grew up listening to really obscure, very extreme death metal, I also have a huge alignment and childhood love with big-ass arena rock. And in this day and age, especially when rock isn’t the flavor of the day, I think it has behooved us that we’ve sort of moved against the pack. When we were debutantes, it was still that like emo-core going on, and we stood out like a sore thumb. Somehow, we were lucky enough people started embracing us as well, even though we weren’t part of any major music movement. Maybe there was a murmur about an underground occult rock thing going on at the time. But that was at such a low level that wouldn’t have affected people in general. But then a lot of kudos and credit I must give to [GUNS N’ ROSES bassist] Duff McKagan, [METALLICA‘s] James Hetfield, [PANTERA‘s] Phil Anselmo, Jerry Cantrell from ALICE IN CHAINS and Dave Grohl [FOO FIGHTERS], of course. All those guys took us on tours. They lifted up the band GHOST, onto their stages and put us in front of a lot of people. Without that, this wouldn’t have happened.”

GHOST‘s fifth album, “Impera”, sold 70,000 equivalent album units in the U.S. in its first week of release to land at position No. 2 on the Billboard 200 chart. It marked the third top 10 album — and fifth top 40-charting set — for the Swedish act.

“Impera” was released on March 11. The 12-song effort was produced by Klas Åhlund and mixed by Andy Wallace.

Forge worked on the follow-up to 2018’s “Prequelle” with Åhlund and Swedish co-writers Salem Al Fakir and Vincent Pontare, whose credits include Madonna and Lady Gaga.

In March 2020, at final show of GHOST‘s “Prequelle” tour in Mexico City, Mexico, the band officially introduced Papa Emeritus IV, the new character who is fronting the act for its “Impera” album phase.

Forge performed as a “new” Papa Emeritus on each of the band’s first three LPs, with each version of Papa replacing the one that came before it. Papa Emeritus III was retired in favor of Cardinal Copia before the release of “Prequelle”. 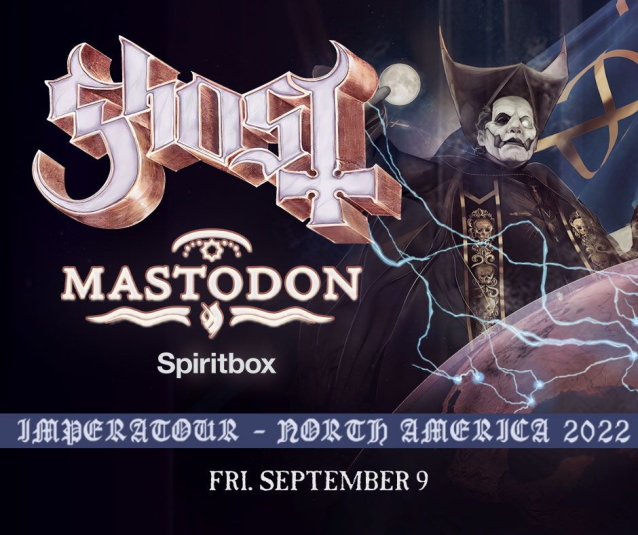 V Describes How BTS Shows Support For Each Other’s Solo Work, What Music And...