George Lynch rejoined DOKKEN on stage last night (Wednesday, May 25) at Lava Cantina in The Colony, Texas to perform three of the band’s classic songs: “Kiss Of Death”, “When Heaven Comes Down” and “Tooth And Nail”. Fan-filmed video footage of his appearance can be seen below.

For much of the past year and a half, Lynch has been performing the same three songs with DOKKEN at various shows in the U.S. Asked in a January 2022 interview with SiriusXM‘s “Trunk Nation With Eddie Trunk” what the experience has been like for him, George said: “It has been [fun], actually, more than I would have thought. I would have thought there… ‘Cause Don [Dokken, DOKKEN leader] and I had had animosity towards each other at a couple of different levels over the decades. And it’s kind of a weird thing, when you think about it. And sometimes, it is uncomfortable for me, because when I show up, I have to sit there, and, of course, they’re playing the songs that I wrote. And the [current DOKKEN] guitar player, Jon [Levin], is a wonderful guy; we’re friends. But they’re doing my whole thing, and then I walk out.

“I think it comes down to, we’re entertainers, and if I’m gonna spend my time crying about anything, I’m just gonna hurt myself and the fans, and that doesn’t do anybody any good,” George continued. “And so I try to keep positive about the whole experience. And it has been, actually, good for everybody. The fans love it. I love doing it because the easiest thing I can do is play DOKKEN songs — songs that I helped write 35, 40 years ago that I can play in my sleep with one arm tied behind my back and go out and enjoy it and not have to work that hard and just really enjoy what I’m doing, enjoy the moment. And it’s the path of least resistance. A lot of these other projects I do, they’re not as easy of a sell. When I’m doing a KXM project or whatever it is, I sometimes have to work at it a little bit — I do have to work at it a bit harder. What is this supposed to be? How am I supposed to write? How am I supposed to look? How am I supposed to sell this? With DOKKEN, I don’t have any of those issues or concerns because all the work’s been done, we’ve already established what we are and I know what to do. So it’s really, like I said — the path of least resistance sometimes is the right one.”

As for why he only performs three songs with DOKKEN as opposed to playing the entire set, George said: “Well, that’s probably an economic issue on Don‘s side. I mean, Don owns the name of the band. It works on me on all levels at this point, and obviously it works for Don, so if it’s not broken, why fix it? And I don’t know… I would just be speculating that he’s concerned maybe that something could pop up if he gets in bed with me and then now he doesn’t have what he’s built over all these years. So there’s that. And maybe financially it would be not as — I don’t know — not as [much of] a positive outcome for him. I’m not sure; we haven’t talked about it. But what we’re doing now works. Obviously, what you just brought up is something that everybody’s thinking about, but, hey, it’s not up to me to decide. But I certainly feel that would probably make sense [for me to play the whole set]; I could see that making sense. I’m already there — why don’t I just go out and finish playing the rest of the songs that are part of my legacy? People would like that. There’s a lot of different ways to think about that. There’s what we do as a business, and I’m not ashamed of that. I don’t think it’s a bad thing to talk about the business side of music. It doesn’t take away from the art; it doesn’t take away from the creative part of it. Those are two different sides of the same coin. We all need to make a living. But you have to have that balance of appreciating and producing music that you love and that people enjoy, and at the same time, it has to make sense financially. So I’m not sure which one that is, as to why we’re not back together on a more complete basis, where I’m playing the whole set, but I’ve got a feeling it’s probably financial.”

Asked if there has been any talk of the classic DOKKEN lineup reuniting once again to write and record new music, George said: “We have [talked about it], and the opportunity has come up every couple [or] few years. And we had offers, and they’re good offers. But it’s tricky at this point in all our careers, when we’ve all kind of established ourselves on other paths, to bring us all together. And even though the offers are good, it’s not enough to make us all just stop what we’re doing in our tracks and re-route our careers to do that. Every time it comes up, we always run into these obstacles. They’re not anybody’s fault in particular, but it just seems like an impossibility.”

In October 2016, the classic lineup of DOKKEN — Don, George, Jeff Pilson (bass) and Mick Brown (drums) — reunited to play the Loud Park festival in Japan. Fortunately for fans outside of Japan, cameras were there to capture the performance and Frontiers Music Srl issued “Return To The East Live 2016” in April 2018. In addition to the Japanese performance, the set featured footage from the classic lineup’s only U.S. show in September 2016 at Badlands in Sioux Falls, South Dakota. The package also included a new song called “It’s Just Another Day”, the first DOKKEN track featuring the group’s classic lineup since 1997’s “Shadowlife”, and two acoustic re-workings of classic tracks.

Since completing the Japanese reunion dates, DOKKEN has continued to perform with the group’s current lineup — including bassist Chris McCarvill, Levin and drummer BJ Zampa (HOUSE OF LORDS).

DOKKEN recently finished recording a new studio album, tentatively due later this year via Silver Lining Music, the label owned by Thomas Jensen, one of the founders of Germany’s Wacken Open Air festival. It will mark the group’s first disc since 2012’s “Broken Bones”.

Over the past several years, Lynch has appeared on recordings by THE END MACHINE, KXM, ULTRAPHONIX and SWEET & LYNCH. He released his first-ever full-length instrumental album, “Seamless”, last August via Rat Pak Records. 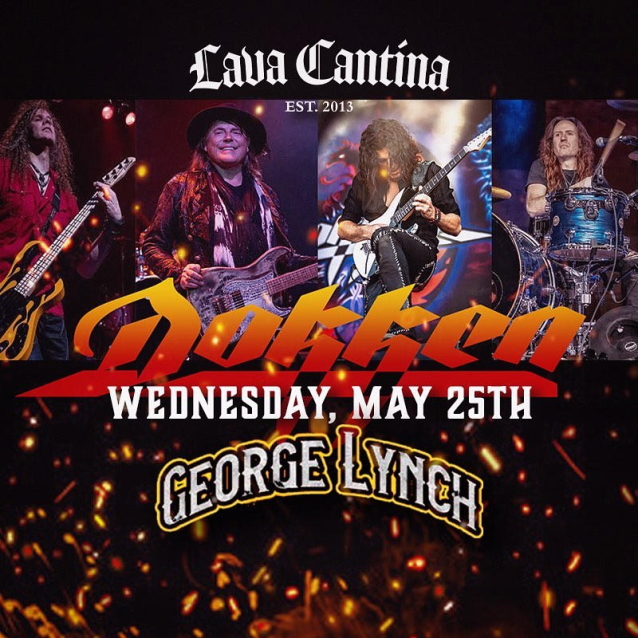