Originally planned two years ago, the 19-song set included 10 tracks from the 1970s, five cuts from the 1980s, three from the 1990s and one blues cover that was originally featured on AEROSMITH‘s 2004 album “Honkin’ On Bobo”.

AEROSMITH‘s longtime drum tech John Douglas sat behind the skins for drummer Joey Kramer, who announced in March that he would sit out the band’s concerts in 2022 so he can “focus his full attention on his family during these uncertain times.”

In June, Kramer‘s wife Linda Gail Kramer died at the age of 55. No cause of death has been revealed.

AEROSMITH‘s setlist for the Fenway concert:

AEROSMITH played its first concert in more than two and a half years on September 4 in Bangor, Maine.

Prior to the show at Maine Savings Amphitheater, the band’s last live performance took place in February 2020 in Las Vegas as part of AEROSMITH‘s “Deuces Are Wild” residency.

Four months ago, AEROSMITH announced that singer Steven Tyler had entered a treatment program following a relapse, prompting the band to put their Las Vegas residency on a temporary hold.

When AEROSMITH announced Tyler‘s return to rehab in late May, the band said in a statement that the 74-year-old underwent foot surgery in preparation for the group’s return to the stage, and in managing his pain, suffered a relapse.

AEROSMITH said at the time it was canceling the June and July dates of the “Deuces Are Wild” residency, which was slated to begin at Dolby Live at Park MGM on June 17.

Tyler had been struggling with drug and alcohol addiction since the mid-1980s. Over the course of the last four decades, he had relapsed several times, including in the early 2000s and 2009. 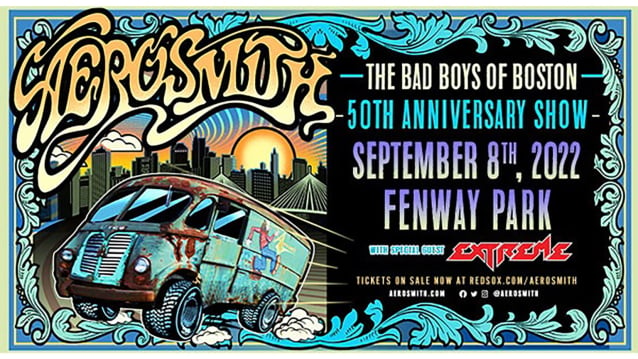 A Night at Brooklyn Museum With Black Fashion Fair