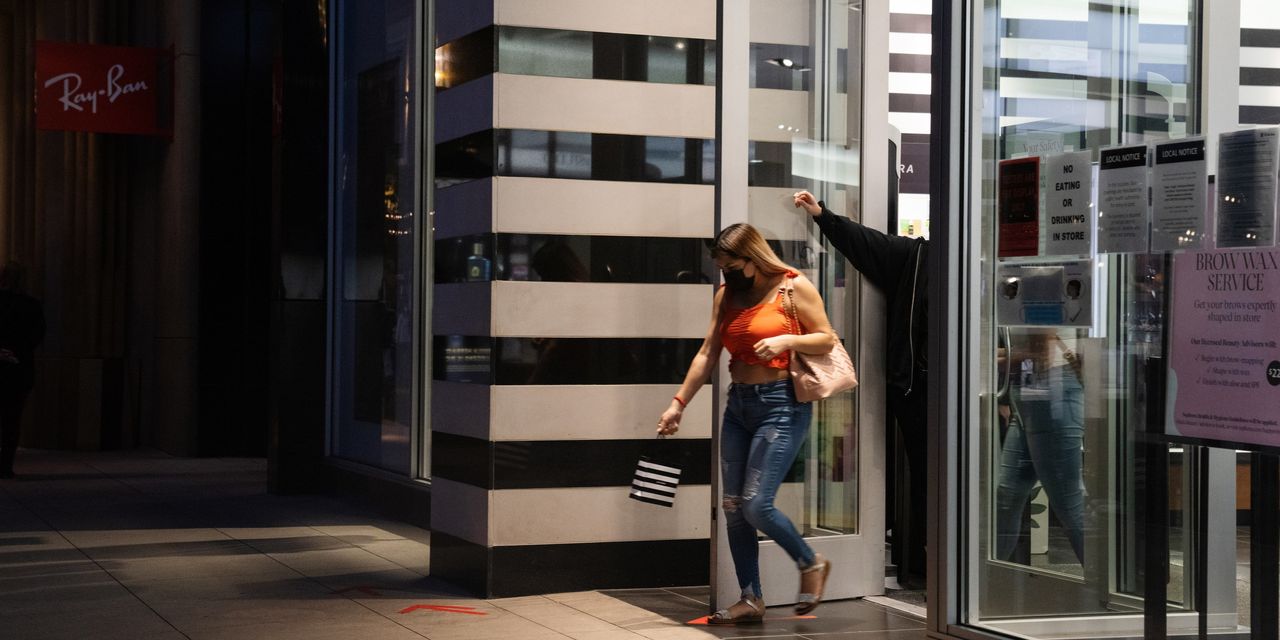 Shoppers extended stimulus-induced spending in April, maintaining a level of retail sales from the prior month with increased expenditures on autos and dining out.

Retail sales—a measure of purchases at stores, at restaurants and online—overall were unchanged last month from March, the Commerce Department reported Friday. That kept spending at the same pace set by March’s upwardly revised 10.7% advance, which was influenced by government-stimulus money for most households.

“Flat sales going from March to April is still pretty strong. The level of sales is much higher than before the pandemic,” said Scott Brown, chief economist at Raymond James Financial. “It’s still a sign that consumer spending is pretty healthy at this point.”

Sales were up 2.9% at auto and parts dealers, where shortages in available cars have driven up prices, and 3% at restaurants and bars, a positive sign for the hard-hit industry as the U.S. economy more fully opens.

The leisure and hospitality sector, including restaurants, added 331,000 jobs in April, accounting for much of the country’s job creation last month. Commerce’s Friday report showed sales at restaurants and bars in April were just 2% lower than their levels in February 2020, just before the pandemic took hold in the U.S.

Shoppers otherwise last month cut spending across a range of retail categories, such as clothing and accessories, furniture, and sporting goods. Sales at general merchandise stores, such as big-box retailers, and online retailers also fell.

Separately, industrial production in the U.S. expanded in April amid strong demand for goods, but the sector continued to be constrained by supply-chain bottlenecks.

Industrial production—a measure of factory, mining and utility output—rose at a seasonally adjusted 0.7% in April compared with March, the Federal Reserve said Friday. That was broadly in line with economists’ expectations.

Manufacturing output, the biggest component of industrial production, increased by 0.4% in April from the prior month. Motor vehicle and parts production weighed on the overall figure, falling by 4.3% on month, as the global shortage of semiconductor chips has led to plants running at less than full capacity.

How has your spending changed as your community has started opening up? Join the conversation below.

Americans sharply increased spending on goods earlier in the pandemic, as people stayed at home amid lockdown orders and social distancing efforts aimed at combating the virus’s spread. Economists expect spending for services, such as in the leisure and hospitality industry, to pick up as more people become vaccinated and as establishments in the services sector are allowed to more fully operate.

“All of that leads to services spending coming back online in a really big way,” said Tim Quinlan, senior economist at Wells Fargo.

The surge in retail spending earlier in March came as the government distributed hundreds of billions in direct cash payments to households. That was similar to a large jump in retail sales during January, following a separate round of direct payments authorized by Congress at the end of 2020.

The stimulus checks “burned a hole through consumers’ pockets in those months and contributed to big, big surges” in retail sales, Mr. Quinlan said. “The immediate sugar high from the stimulus could be wearing off.”

There are positive signs for the economy as the U.S. moves toward a full reopening. Claims for unemployment benefits have continued a downward trajectory to pandemic lows. State and local governments have further eased restrictions on businesses as coronavirus vaccines circulate and the number of virus cases recedes. The Centers for Disease Control and Prevention on Thursday said fully vaccinated people generally don’t need to wear a mask or socially distance during any indoor or outdoor activities.

Bernard Flynn, owner of Trident Booksellers & Cafe in Boston, said a pickup in business that he started to see in March has continued. Sales at the store fell 50% in 2020, earlier in the pandemic, compared with 2019, Mr. Flynn said. Now, sales are off about 25%, he said.

Mr. Flynn said he has noticed a rise in visitors who are travelers staying in nearby hotels, along with other shoppers who are eager to be out and about.

“People are just so happy to go buy something. We see a lot of that: People just delighted to be browsing in a bookstore,” he said.

A tracker of credit- and debit-card spending from Bank of America showed that spending at department stores fell a seasonally adjusted 28% in April from March, while outlays on clothing and furniture also fell. Spending at restaurants and lodging jumped, however, as did outlays on airlines, which were up 23%.

Retail sales, excluding motor vehicles and gas stations, were up 43% in April, compared with the same month in 2020, when parts of the economy were shut down due to the pandemic, according to Affinity Solutions, a data firm that tracks credit- and debit-card spending.

Sales at restaurants and bars in April more than doubled over the year, Affinity’s data show. Compared with 2019 levels, the number of reopened U.S. restaurants has daily hovered above 80% since late April, according to data from OpenTable, the reservation platform.

Fed officials have said the surge in prices is likely temporary and that the central bank has tools to combat inflation should it rise too much.

Meanwhile, they have signaled their easy-money policies, including maintaining low interest rates, will remain in place until the labor market is more fully healed.

Meanwhile, some employers have said they are struggling to hire workers as business picks up.

Mr. Flynn, the Boston business owner, said he is adding workers in anticipation of further relaxing of government mandates. He said he recently gave his kitchen staff raises and lifted his starting wage by $1 to $16 an hour to attract new workers. Since doing so, he has been able to bring on several new staff, he said.

“We’re hiring now, planning on restrictions being lifted,” he said. “As soon as they eliminate restrictions, we’re going to be doing a lot of business. I think the pent-up demand is there,” he said.

—Xavier Fontdegloria contributed to this article.

The Modern Militiamen | 2A For Today