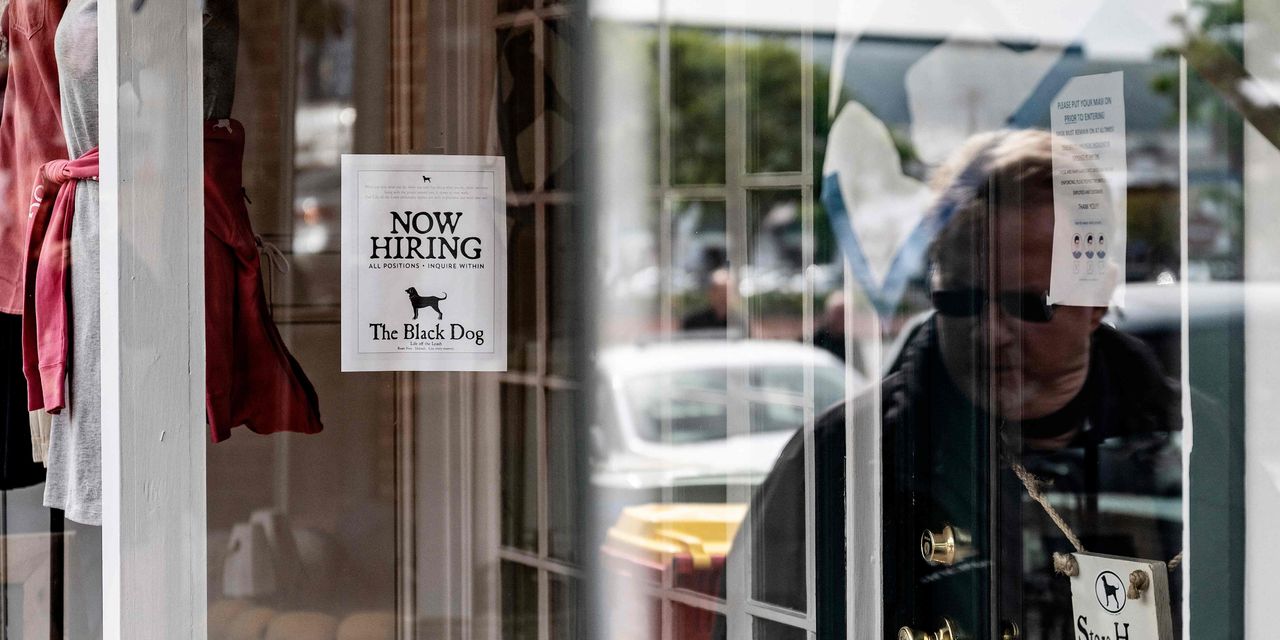 Jobless claims continued a several-week slide to new pandemic lows, in a sign hiring is primed to strengthen as workers return to the labor market.

Worker applications for unemployment benefits fell to 473,000 last week from a revised 507,000 a week earlier, the Labor Department said Thursday. Claims remain above pre-pandemic levels but are now at the lowest point since mid-March 2020, when the pandemic shut down the economy and triggered widespread joblessness.

The four-week moving average, which smooths out volatility in the weekly numbers, also reached a new pandemic low of 534,000.

“Employers are really clinging to their talent,” said Jay Denton, chief analyst for ThinkWhy, a labor-analytics firm. “There’s a lot of demand there. We will start to see more hiring.”

Higher vaccination rates, fiscal stimulus and easing business restrictions are converging to support stronger spending across the U.S. But job growth isn’t keeping pace. U.S. employers added a modest 266,000 jobs in April, far short of the one million that economists had forecast and the weakest monthly gain since January.

Though benefits applications are on a downward trend, the number of people claiming benefits each week through regular state programs remains elevated. So-called continuing claims have stagnated between 3.6 million and 4 million since March.

A total 16.9 million people were receiving benefits in the week ended April 24 through one of several programs, including regular state aid and federal emergency programs put in place in response to the pandemic. Total claims are down about 3 million from the first week of March, but still nearly eight times as high as before the pandemic’s onset.

A coronavirus relief package passed in March expanded eligibility for extended unemployment benefits and a gig-worker program until early September and continued a $300-a-week supplement on top of regular state benefits.

Many economists and employers say the extra payments are discouraging unemployed people to job hunt because many are receiving more in benefits than they would at work. A number of Republican-led states are opting to end the extra $300 and other enhanced federal benefits early, though the policy changes aren’t yet reflected in the claims figures.

What Happens When You Lose Your Job?

Claims among gig workers and others not typically eligible for unemployment benefits increased last week in some of the states that announced they were leaving federal benefits programs early. For instance, pandemic claims increased in Mississippi, Montana and South Carolina.

President Biden on Monday defended the enhanced benefits and said his administration would make clear that people can’t turn down suitable jobs and keep collecting benefits, except in specific circumstances. His administration has said other factors are keeping workers on the sidelines, such as fear of getting sick during the pandemic and a lack of full-time child care.

The rate at which workers quit their jobs—a proxy for confidence in the labor market—held steady at 2.4% in March, matching a record high for data tracing back to 2000. “That signifies that it’s like, ‘See you later, I’m going to go get the next-best-paid job,’ ” Mr. Knightley said. “That sort of movement normally translates into companies thinking, ‘Actually, I need to retain staff. I’ve got to start paying more.’ ”

Wages for workers rose in April as some employers appeared to lift pay to attract or retain employees. Average hourly earnings for private-sector employees rose by 21 cents to $30.17 last month. The gain is notable because strong hiring in the lower-wage hospitality sector—which occurred in April—would typically put downward pressure on average earnings.

From Dutch Tulips to Internet Stocks, How to Spot a Financial Bubble

Louis Vuitton Boat Shoes Might Be The New Wave

Making a social impact through filmmaking