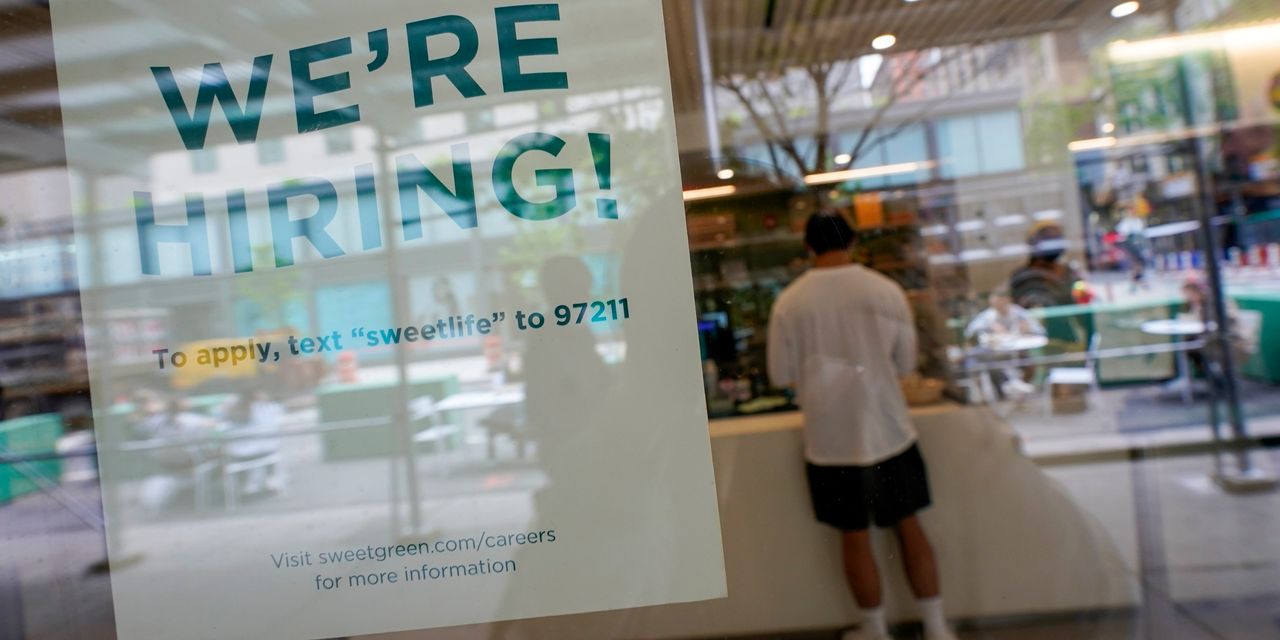 Hiring in the U.S. unexpectedly slowed in April, a sign the nation’s recovery from the pandemic still faces challenges as many businesses struggle to find workers or remain cautious about the economic outlook.

U.S. employers added a modest 266,000 jobs in April, a report Friday by the Labor Department showed, far short of the one million that economists had forecast and the weakest monthly gain since January. The deceleration came after payrolls rose a downwardly revised 770,000 in March and left total employment down by 8.2 million from its pre-pandemic level.

The unemployment rate ticked up to 6.1% in April from 6% a month earlier, partially reflecting an increase in people entering the workforce.

Higher vaccination rates, fiscal stimulus and easing business restrictions are converging to support stronger spending across the U.S. But an economy emerging from pandemic-related disruptions is also encountering restraints on job gains and broader economic activity, as imbalances in supply and demand for goods, services and labor play out.

Some businesses are cautious about ramping up hiring, given that the pandemic and related uncertainty continues. Others are reporting they can’t find enough workers due to expanded unemployment benefits, workers’ fear of contracting Covid-19 and child-care burdens due to school closures, economists say.

Are you seeing positive changes in your community’s labor market? What has your experience been? Join the conversation below.

“It’s just taking longer than expected to match people to jobs,” said Aneta Markowska, chief economist at Jefferies LLC. “But it’s not a question of if, it’s a question of when, these jobs do come back.”

Payrolls grew solidly last month in many sectors that were hard-hit by the onset of the pandemic, and they declined in many that previously benefited. Transportation and warehousing employers cut jobs. Temporary-help employment fell by 111,000. Manufacturing employment was down 18,000—predominantly in motor vehicles, where semiconductor-chip shortages idled some factories. Retail jobs fell by 15,000, despite robust consumer spending this spring.

Signs of labor-market tightness also emerged in Friday’s report, aligning with many companies’ complaints that they can’t find workers to meet demand. Wages for workers rose in April as some employers appeared to lift pay to attract or retain employees. Average hourly earnings for private-sector employees rose by 21 cents to $30.17 in April. The gain is notable because strong hiring in the lower-wage hospitality sector—which occurred in April—would typically put downward pressure on average earnings.

The average workweek increased to 35 hours in April, an indication some employers added worker hours to compensate for the lack of labor.

Mercury Marine, a boat-engine manufacturer based in Fond du Lac, Wis., is ramping up overtime hours so it can make enough engines as it tries to find more workers.

The company plans to add 250 manufacturing employees to its main campus this year. But Fond du Lac’s unemployment rate of about 4% is well below the national average, meaning there are relatively few people in the area available to work, said Chris Drees, the manufacturing company’s president.

“If we can’t get those employees, it will certainly hinder our ability to produce,” Mr. Drees said.

Under federal relief plans, those receiving jobless benefits get an additional $300 a week on top of regular state benefits, nearly doubling the average of $318 a week, according to the Labor Department. That means the average unemployment recipient earns better than the equivalent of working full time at $15 an hour. Those enhanced benefits are available until September, for a maximum of nearly 18 months—about three times as long as most states typically allow.

Some employers and economists say the enhanced payments are one factor affecting job growth, and the U.S. Chamber of Commerce on Friday asked policy makers to end the additional benefits.

President Biden, speaking to reporters at the White House on Friday, dismissed the idea that enhanced unemployment benefits are keeping people from returning to work. “I know some employers are having trouble filling jobs. But what this report shows is that there’s a much bigger problem,” he said, noting the economy has 8 million fewer jobs than when the pandemic began.

Friday’s report adds to the likelihood that the Federal Reserve’s easy-money policies will remain in place in coming months, something financial markets reflected in price movements on Friday.

Since last year, the Fed has held interest rates near zero and purchased $120 billion per month of Treasury and mortgage bonds. Fed officials said last week they want to see the labor market make “substantial further progress” before they begin to scale back the purchases.

After the strong employment report in March, Fed Chairman Jerome Powell said he would like to see a string of similarly robust data. “The economy is a long way from our goals, and it is likely to take some time for substantial further progress to be achieved,” he said in a news conference last week.

The leisure and hospitality sector, including restaurants, accounted for the bulk of employment creation in April, adding 331,000 jobs. The Labor Department said that reflected an easing of pandemic-related restrictions in many parts of the country.

Paul Keeler, owner of two barbecue restaurants and a steakhouse in Arizona, said sales across the three restaurants surged by 17% at the start of this year compared with the beginning of 2019, when he said business was hot.

“The pent-up demand has been tremendous,” Mr. Keeler said. “Because we’ve been so busy, we’ve been interviewing and hiring every week.”

Regions that suffered more from the pandemic and imposed greater restrictions are showing signs of faster rebounds. For example, Homebase data indicated that small-business employment in Florida has held relatively steady since October 2020, compared with steep climbs in New York and California since January. The number of workers clocking in at New Mexico small businesses is now up nearly 3% from levels registered last autumn.

Heritage Hotels & Resorts has logged a pickup in customer bookings in the past month as New Mexico eases restrictions, said Molly Ryckman, the company’s vice president of sales and marketing. Earlier this week, New Mexico officials lifted hotel occupancy restrictions in counties where Heritage operates several boutique hotels. Restrictions were relaxed in the other counties in which it operates a few weeks ago.

Heritage has added hundreds of workers in the past couple of months, though staffing is still less than half of pre-pandemic levels. The company currently has 150 open jobs but is struggling to quickly fill the positions. As a result, it is increasingly looking at candidates without previous hospitality experience, Ms. Ryckman said.

“Especially in a destination like Santa Fe, when you shut down every museum and every restaurant and all of those are reopening at the same time, it makes it a challenge to fully staff and reopen,” she said.

How to Find a Job

Liz Cheney Is Not the Problem