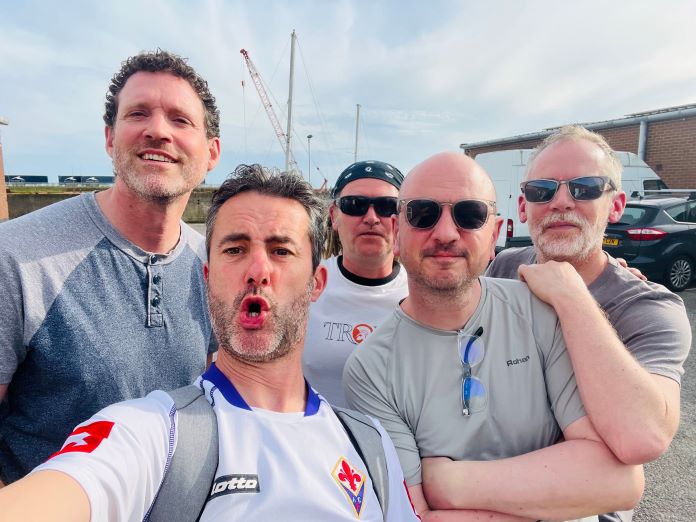 Album number four “Earthanasia” is out in October

Slough’s finest Thousand Yard Stare release their fourth long player next month. Entitled Earthanasia, the album comes out on Friday 14th October 14th via their own Stifled Aadvark label. The follow-up to 2020’s third record The Panglossian Momentum. Earthanasia was also recorded at Raffer Studios in Kent, England, same as its predecessor.

If the previous record was crafted by deliberate design, Earthanansia is more a product of happy accident. Lead singer Stephen Barnes says “There was never any real intention to make another album after The Panglossian Momentum, which was the record we had always wanted to make. It felt like our final statement, all boxes ticked, a full stop. But perhaps because of realising that release, it afforded a freedom to write without internal pressure, a release in a different sense if you like. New tracks began to emerge – hence the recent run of stand alone singles – which allowed us to try different approaches and flavours, shackles off. Songs kept coming and whilst gathering them up, we had a concordant meld of tracks, all the parts for an album – compendium if you like – hiding in plain sight. Much like our debut album (Hands On) back in ’91, which was – as most debuts are – a farrago of your best tracks to that point, and Earthanansia has a similar aesthetic. It was a delightful discovery”.

Earthanansia does not stick to a formula or thematic…the menagerie of songs espouse hope, defiance, wide eyed questioning, contemplation, observation and the human condition in a post pandemic world over an increasingly ambitious soundtrack. From the opening instrumental canter of “Brocken Spectre”, the chugging call to arms of “Measures”, the widescreen impertinence of “Esprit Du Corps”, the crunch-shimmer of “Hivemind”, wonk pop of Isadora, the breeze gaze cautionary tale of “Adverse Cambers” to the string laden filmic vibe of the title track, this is the sound of a band riding their second coming, full of confidence in their skin, exploring the corners of their sound… their moment of serendipity.

The full tracklisting is as follows:-

Koreans Brace For Super Typhoon Hinnamnor, The Strongest Typhoon Korea Has Ever Faced

Earthanasia is available to pre-order on 6-panel CD and Ltd. Edition Cassette via Thousand Yard Stare’s BigCartel and Bandcamp pages.

The band will also play the following live shows in support of Earthanasia, calling in at:-

“Little Women” Actress Park Ji Hu Is A True K-Pop Fan, And Her Co-Stars Have Connections To Her Biases

Top 5 Shows On Viki In September