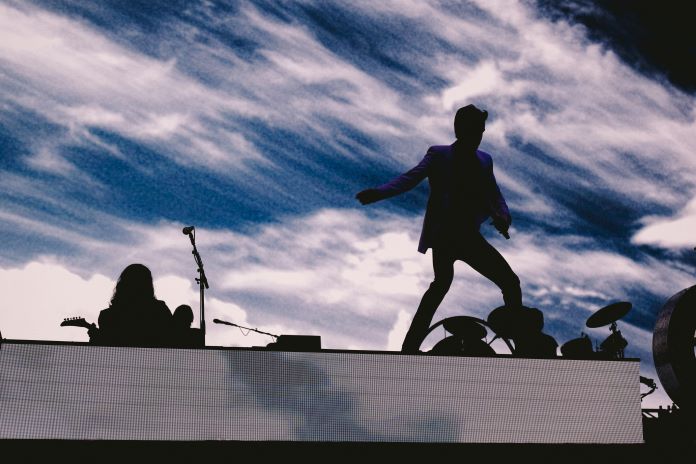 They say good things come to those who wait. Which is as good an adage as any for The Killers long-awaited arrival in Coventry. Originally scheduled for May 2020 to coincide with the band’s sixth album, Imploding The Mirage. But rescheduled twice since then thanks to the ongoing Covid-19 pandemic, during which time The Killers put out a seventh long player last summer in the shape of Pressure Machine. Looking around the retail park on which the Coventry Building Society Arena is situated, it’s clear judging by the number of Killers t-shirts on display why the majority of people are milling around outside.

However, first up are Manic Street Preachers in the unusual slot of support act. For a band with fourteen albums under their belts including a number one with their most recent, The Ultra Vivid Lament. It must seem somewhat strange to be going on early just as people are still entering the stadium. Nevertheless, that doesn’t hamper their energetic performance, launching into what’s become their customary live opener “Motorcycle Emptiness”. James Dean Bradfield is in fine form vocally throughout their short (by their standards), twelve-songs, fifty minutes set. A majestic “From Despair To Where” is dedicated to anyone that saw them at long defunct Coventry venue The Stoker back in 1991, while regular set closer “A Design For Life” makes a surprise appearance in the middle of the set. Paving the way for “If You Tolerate This Your Children Will Be Next” to provoke a mass singalong at the end. Elsewhere, a sturdy run through The Cult’s “She Sells Sanctuary” and the welcome return of 2009’s “Autumnsong” provide additional highlights while suitably warming up the crowd for the headliners.

Taking the stage in a striking pink jacket, Brandon Flowers launches head first into Imploding The Mirage opener “My Own Soul’s Warning”, which immediately brings 40,000 hardy souls to life in an instant. The current Killers touring line-up might only feature one other full-time band member – drummer Ronnie Vannucci Jr – but they’re still a potent force to be reckoned with. Each of the eight personnel on stage bringing their own individual elements to the mix. Taking a trip back in time to the mid-2000s, Sam’s Town is represented by “Enterlude” segueing into a forceful “When You Were Young”. While Flowers and co turn the clock back even further, celebratory blasts through “Jenny Was A Friend Of Mine” and “Smile Like You Mean It” reminding all and sundry why they fell in love with The Killers in the first place.

As one would expect, the set is heavily focused on material from Imploding The Mirage, and “Running Towards A Place”, “Dying Breed” and a rapturous “Caution” all stand out impeccably. In contrast, only one song is aired off their latest record, “The Getting By” squeezed midset inbetween delectable airings of 2008’s “Spacemen” and “Somebody Told Me” from the band’s debut, Hot Fuss. With backdrop visuals ranging from brightly lit Las Vegas by night to a desert road trip for “Runaways”, The Killers stage show is nothing short of spectacular.

A frantic rendition of Joy Division’s “Shadowplay” makes way for “This River Is Wild” before “All These Things That I’ve Done” ensures more audience interaction that makes the hairs stand up on the back of the neck, such is its poignancy. Reserving three of their best known songs for the encore in the shape of “The Man”, “Human” and “Mr Brightside”, The Killers don’t so much bring the party to Coventry, but demand our presence instead.

As someone particularly averse to stadium gigs, The Killers are an exception to the rule, and on tonight’s showing there’s no one better on the planet right now to do justice in such cavernous surroundings.