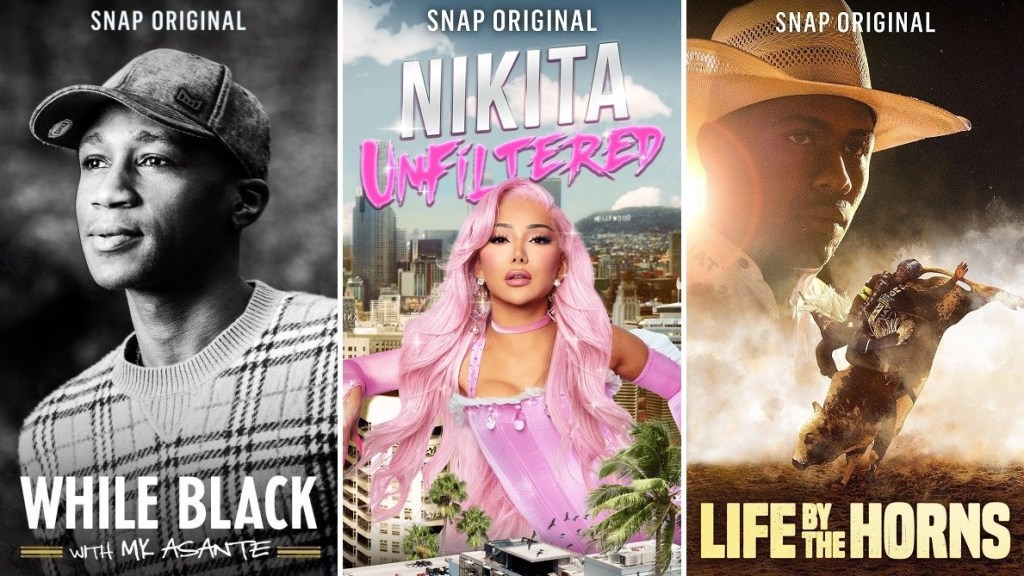 Snap released its second annual diversity report — showing no major changes in the makeup of its leadership ranks in 2020 compared with the year before.

But the company is touting one standout metric: At least 53% of Snap Originals series included leads or hosts who are Black, Indigenous, and people of color (BIPOC) and/or LGBTQ+ talent. According to Snap, that tally doesn’t count talent in supporting roles or in shows with rotating casts.

In 2021, Snap’s goal with its original content slate is to meet or exceed that diversity threshold, said Vanessa Guthrie, head of Snap Originals. “We’ve paid close attention to representation, to continue to expand content that is more inclusive of the Snapchat community,” she said.

Snapchat shows with BIPOC and/or LGBTQ hosts or leads include “Life by the Horns,” following Ezekiel Mitchell on his journey to become the first African American to win the PBR championship in 35 years; “Queen of Stylez,” featuring transgender celebrity hairstylist Tokyo Stylez and her clients including Cardi B and Paris Hilton; “The Honeybeez of ASU,” starring Alabama State University’s plus-size dance team; “Nikita Unfiltered,” a reality series starring transgender beauty icon Nikita Dragun; “While Black With MK Asante,” in which the author-filmmaker-professor documents the experience of young Black Americans; “Coach Kev,” a motivational series with Kevin Hart; and Will Smith’s quarantine series “Will From Home.”

Meanwhile, the percentage of people from underrepresented U.S. racial groups in leadership roles at Snap barely budged in 2020 — increasing from 13.1% in 2019 to 13.6% last year. Women’s representation across the company increased by an even smaller margin, inching up from 32.9% to 33.1%.

Those were “areas where we made progress in the right direction, but at a slower rate than we had hoped,” CEO Evan Spiegel and Oona King, Snap’s VP of diversity, equity and inclusion, said in the report.

And in a survey of Snap’s U.S. and U.K. employees, 7.3% identify as members of members of the LGBTQ+ community, according to the report.

GLAAD, for one, applauded Snap’s representation of LGBTQ people in its programming lineup, especially in contrast to TV. The media advocacy org’s 2021 “Where We Are on TV” report found that 9.1% of scripted characters scheduled to appear on broadcast TV this season are LGBTQ, down from the previous year’s record high of 10.2%.

“At a time when programming with LGBTQ leads is still rare, the many LGBTQ hosts and leads of Snap Originals have intersectional identities, will give LGBTQ viewers stories to relate to, and will open the eyes of non-LGBTQ people in bold ways,” Rich Ferraro, chief communications officer of GLAAD, said in a statement.

In Snap’s diversity report, it also called out the Yellow Accelerator program, which invests in startups “focused on contributing to human progress” through creative storytelling. Of the nine companies in the 2021 Yellow Accelerator class, seven have at least one BIPOC or woman founder and five are BIPOC-founded companies. Historically, across all of its classes, 22 out of 39 companies had at least one BIPOC founder.

Israel carried out its deadliest strike yet, as the fighting raged on.

New York Board of Regents Urges All School Districts to Develop Diversity and Equity...