Lawyers for Sam Smith and Normani are asking a judge to reject the bulk of an amended copyright infringement lawsuit that alleges the superstar duo’s 2019 multiplatinum hit “Dancing With a Stranger” stole from a 2015 song by the same name.

In a recently filed dismissal motion obtained by Rolling Stone, the lawyers say the revised complaint, filed Aug. 15, doesn’t go far enough in addressing the alleged deficiencies listed in their prior dismissal motion filed back in July, which was set aside to give the plaintiffs a chance to update their pleadings.

The new, amended complaint does drop its prior demands for punitive damages, statutory damages, and attorney’s fees. But it still brings the same three claims of direct infringement, contributory infringement, and vicarious infringement against all 20 defendants named in the suit.

Smith and Normani’s defense lawyers, who also represent co-defendants Universal Music Group and Sony Music Publishing, among others, call the approach “nonsensical.” They argue someone found liable for contributory or vicarious infringement would be, by definition, not a direct infringer – rather someone who bears secondary liability for gaining something from another person’s direct infringement.

They say the amended “copy-and-paste” lawsuit relies on “self-contradictory” allegations that are “indiscriminately repeated verbatim as to each and every defendant.” For that reason, the claims for contributory and vicarious infringement should be chucked, they argue. 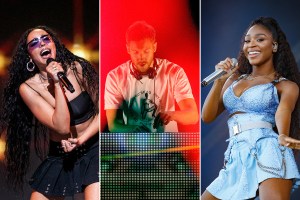 “Plaintiff’s First Amended Complaint continues, rather than cures, plaintiff’s failure to provide each defendant with fair notice of whose infringement he, she, or it supposedly knew about and how he, she, or it materially contributed to or induced it,” the new motion reads.

“Plaintiff stubbornly refuses to allege as to each defendant the claimed basis on which he, she, or it is supposedly contributorily or vicariously liable,” the motion continues, stating that each defendant “is entitled” to know what they allegedly did wrong. “That, alone, is a fatal defect that plaintiff failed to cure in its amended claim.”

The judge did not immediately rule on the request to dismiss the second and third claims for contributory and vicarious infringement.

Songwriters Jordan Vincent, Christopher Miranda, and, Rosco Banlaoi, filed the underlying lawsuit back in March under the group name Sound and Color, LLC. They alleged Smith and Normani, a former member of Fifth Harmony, unfairly enjoyed great success with a sultry duet that ripped off the title, chorus and composition of their original and protected song previously published on Vincent’s YouTube channel, Spotify and other streaming services.

“The hook/chorus in both songs — the most significant part and artistic aspect of these works — contains the lyrics ‘dancing with a stranger’ being sung over a nearly identical melody and musical composition,” the underlying complaint first reported by Rolling Stone reads.

The lawsuit offers a side-by-side comparison of the two songs and alleges their accompanying music videos are strikingly similar. “Both videos consist of a girl performing interpretive dance alone in a minimalist studio, interspersed with shots of the male vocalist,” the filing states.

“A girl dancing alone is not an obvious visual theme for a music video titled ‘Dancing With a Stranger,’ tending to dispel any notion that this similarity is a coincidence,” the paperwork argues. “When the extraordinary musical similarity between the songs is also factored in, it becomes even more apparent that it is impossible that the infringing composition and sound recording were independently created.”

According to the lawsuit, Smith and their co-writers on the song, Tor Erik Hermansen and James John Napier, as well as Normani’s manager Brandon Silverstein and her mentor Tim Blacksmith, all had access to the song, its video, and even the video’s call sheet through either Thrive Records or its agents. The lawsuit claims Thrive was given the materials in 2015 because the label had been “extremely interested in using plaintiff’s song for another artist,” though “the deal never went through.”

“Another suspicious coincidence is that the call sheet for plaintiff’s music video specifically mentioned using the visual concept of mannequins coming to life. Although this concept was not ultimately utilized in plaintiff’s music video, Normani and the director of defendants’ music video gave an interview in 2019 discussing how defendants wanted to use porcelain statues coming to life for their music video,” the lawsuit alleges. “The odds that such a unique but highly similar idea would have come independently to defendants are astronomical, especially considering the other shared similarities.”

A report from musicologist Dr. Alexander Stewart attached to the lawsuit states that “given the degree of similarity” between the two songs, it’s “extremely unlikely that [Smith’s song] was created independently from [Vincent’s].”

The plaintiffs point out that Smith and Normani’s single was certified platinum in more than 10 countries and has been streamed more than three billion times. “As a result of defendants’ exploitation of plaintiff’s song without permission, they obtained a massive international hit single which generated significant revenue and profits,” the lawsuit alleges.

“Defendants’ representatives were contacted in November 2020 about the similarities. Defendants were given every chance to come up with an innocent explanation, but, despite assurances that a response was coming, including a musicological analysis and report, the defendants never issued a response. This suit is being filed as a last resort,” the complaint states.

In their motion to dismiss, lawyers for Smith and Normani say the plaintiffs’ own expert confirms the songs only have two notes in common and admits the chord progressions are different.

As to the titles, they aren’t protectable, the defendants argue. Before the plaintiff’s song, there were other songs with such titles, including Cyndi Lauper’s 1989 “Dancing With a Stranger” and The Risk’s 2019 “Dancing with a Stranger,” the paperwork states.

Dead & Company’s Summer 2023 Tour Will Be Their Last

K-Pop Lyrics Explained: What Does GOT7 Member & Soloist Mark Tuan’s ‘Far Away’ Really...