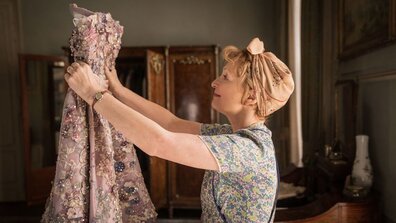 Mrs. Harris Goes to Paris–based on Paul Gallico’s 1958 novel–is the quintessential Sunday matinee film, filled with charm from start to finish. But underwritten characters, underdeveloped plot threads and low stakes bar the film from having a tangible impact.

Set in the 1950s, the film follows Mrs. Harris (Lesley Manville), a widowed cleaning lady who approaches the world with a positive attitude, regardless of whether the favor is returned. Her simple day-to-day routine unravels when she discovers the fashion of Christian Dior, longing to purchase one of the £500 quid dresses for herself. A lucky turn of events provides Mrs. Harris the money she needs to make the purchase, and she flies to Paris to fulfill her dreams.

From there, Mrs. Harris brings her festive British spirit to the haute couture culture of Paris–much to the dismay of some of Christian Dior’s overly judgmental upper-class clients. Along the way, she crosses paths with a variety of characters, including the company’s top model Natasha (Alba Baptista), shy accountant André (Lucas Bravo) and hypercritical executive Claudine (Isabelle Huppert) and impacts their lives in meaningful and unexpected ways.

Mrs. Harris Goes to Paris’ kind-hearted spirit is its biggest success. Mrs. Harris brings a Paddington-style approach to tackling her Parisian journey, never stopping to care about what anyone thinks of her and never staying angry at anyone for too long–even when being so would be justified. The result: a film that has an inherent sense of likability, even when the plot isn’t clicking or certain character decisions feel unjustified. Throughout Mrs. Harris, there are no high stakes, no true conflicts, and no messages regarding the class war in which the character is involved. As such, it wouldn’t be too out-of-place to describe the film as an older-panning, British-infused and slightly more sophisticated version of Emily in Paris.

While this breezy quality makes Mrs. Harris Goes to Paris incredibly watchable, fast-paced and engaging, it also makes the viewing experience somewhat empty. It’s difficult to invest in the characters that surround Mrs. Harris because none of them feel like real people. Even Claudine, the film’s technical ‘villain,’ is such a drab and lifeless character that her judgmental gaze and sneaky demeanor don’t feel threatening in the slightest. These lackadaisical characters make Mrs. Harris’ adventures unfulfilling, since there’s virtually no tension between her and anyone around her. Things just always work out nicely, eliminating the suspense that is not entirely necessary to make the film fun, but is needed to make it meaningful.

Nevertheless, the actors in Mrs. Harris Goes to Paris seem to be having a great time. Manville is excellent in her portrayal of Mrs. Harris, absolutely nailing the character’s chirpy energy and her “go get ‘em” spirit. In their supporting roles, Baptista and Bravo have a lot of chemistry, making it all the more disappointing that their romantic subplot isn’t given further development or more screen time. The same goes for Huppert, who, even in her limited role, delivers. (www.focusfeatures.com/mrs-harris-goes-to-paris)

Slipknot’s Corey Taylor: ‘Our stage manager passed out, so we set his legs on fire’ | Pop and rock

Underrated Scene Of The Week: The Brilliant Kim GoEun Has A Run-In With Power...

Zedd at Story Nightclub in Miami on Oct. 28th

Slipknot’s Corey Taylor: ‘Our stage manager passed out, so we set...