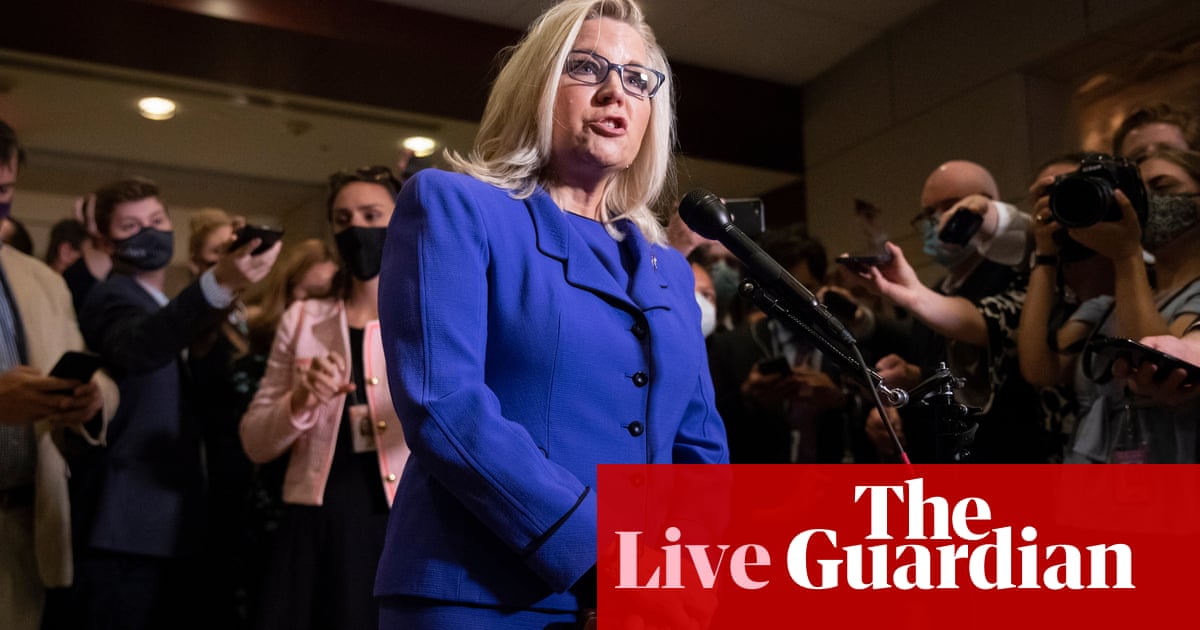 While some Republicans lamented the ouster of Liz Cheney, freshman congressman Madison Cawthorn instead responded by taunting his colleague.

Congressman Ken Buck, a member of the conservative Freedom Caucus in the House, described Liz Cheney as a victim of “cancel culture”.

“Liz Cheney was canceled today for speaking her mind and disagreeing with the narrative that President Trump has put forth,” Buck told reporters shortly after the vote to remove Cheney as conference chair.

Buck was one of Cheney’s few defenders in the House Republican caucus going into the vote, and he was the only Republican lawmaker present for Cheney’s defiant floor speech last night, according to CNN.

Immediately after the meeting where she was stripped of her position, Liz Cheney said she was “absolutely committed” in not embracing Donald Trump’s “big lie” about the election.

“We cannot both embrace the big lie and embrace the constitution,” Cheney said. “Going forward, the nation needs it, the nation needs a Republican party that is based upon fundamental principles of conservatism and I am committed and dedicated to ensuring that that’s how this party goes forward and I plan to lead the fight to do that.”

Cheney’s ouster was widely expected after she found herself at odds with other members of Republican leadership over her refusal to stop blaming Trump for inciting the mob attack on the US Capitol on 6 January.

Ahead of the vote, Cheney addressed the caucus, standing by her position.

“If you want leaders who will enable and spread his destructive lies, I’m not your person, you have plenty of others to choose from. That will be their legacy,” Cheney said. At moments in her response ahead of the closed vote she was booed by some of her colleagues.

The meeting to remove Liz Cheney from her post as House Republican conference chair took a total of about 15 minutes.

A Capitol Hill reporter for Politico described the event as “the shortest conference meeting I can remember covering”.

The meeting was so short that some House Republicans missed the vote entirely because they arrived a few minutes late, per the New York Times.

Looking ahead, House minority leader Kevin McCarthy has set an election to replace Liz Cheney as conference chair for this Friday, per PBS NewsHour.

Congresswoman Elise Stefanik, who is widely expected to replace Cheney, has formally announced her candidacy for the position. She has already received Donald Trump’s endorsement as well.

House minority leader Kevin McCarthy’s decision to conduct a voice vote on removing Liz Cheney as conference chair surprised many people, including some members of the Republican caucus.

Speaking to reporters after the conference meeting, Adam Kinzinger, a Cheney ally, said members were not given the chance to deliver speeches on the issue, aside from Cheney’s short remarks at the top of the meeting.

“It was definitely not what I expected,” Kinzinger said.

But the lack of a secret vote on removing Cheney will allow McCarthy to dodge questions about how many members still supported the anti-Trump congresswoman and whether his caucus remains divided over the former president.

“Liz Cheney is a bitter, horrible human being. I watched her yesterday and realized how bad she is for the Republican Party,” the former president said in the statement released by his political action committee.

“She has no personality or anything good having to do with politics or our Country. She is a talking point for Democrats, whether that means the Border, the gas lines, inflation, or destroying our economy.”

Trump closed the statement by predicting that Cheney would soon become a “Paid Contributor on CNN or MSDNC”.

Shortly after she was removed as conference chair, Cheney told reporters that she remained committed to pushing back against Trump’s hold over the Republican party.

“I will do everything I can to ensure that the former president never again gets anywhere near the Oval Office,” Cheney told reporters on Capitol Hill.

Liz Cheney delivered a short speech to fellow House Republicans before the vote to remove her as conference chair, and she was booed for her critical comments about Donald Trump, according to Politico.

A veteran journalist who covered the fall of the Soviet Union said Cheney’s ouster reminded him of how Joseph Stalin would conduct purges of his opponents.

Elise Stefanik has released a letter formally announcing she is running to replace Liz Cheney as House Republican conference chair.

Stefanik, a fierce defender of Donald Trump, said she would dedicate herself to providing a “disciplined, unified message from our leadership team” as the party works to take back control of Congress.

“Our Members believe that the stakes are far too high for us to be divided,” Stefanik said.

After being voted out from her role as House Republican conference chair, Liz Cheney said she plans to “lead the fight” to create a stronger party in the future without.

The congresswoman added that she is dedicated to preventing Donald Trump from becoming president again.

“I will do everything I can to ensure that the former president never again gets anywhere near the Oval Office,” Cheney told reporters.

Liz Cheney came out to talk to reporters after she was removed from her role as conference chair in this morning’s House Republican caucus meeting.

The congresswoman said she was committed to pushing back against “the very dangerous lies of a former president”.

Adam Kinzinger, one of Cheney’s few defenders in the Republican caucus, said “Liz has committed the only sin of being consistent and telling the truth.” He added, “I stand with Liz. I’m proud of her.”

Kinzinger confirmed Cheney was removed by a voice vote and there were no speeches given in defense or in opposition to her leadership. “It was definitely not what I expected,” Kinzinger said.

Liz Cheney has been removed from her role as conference chair by a voice vote in the House Republican caucus meeting this morning.

After Liz Cheney’s remarks, congresswoman Virginia Foxx formally introduced a resolution to remove Cheney from her post as conference chair.

House minority leader Kevin McCarthy, who signaled last week that he was open to replacing Cheney, then said he supported Foxx’s motion, per CBS News.

According to Politico, Liz Cheney spoke to the House Republican caucus before the vote, and she warned that Donald Trump will “drag us backward and make us complicit in his efforts to unravel our democracy”.

The daughter of the former vice-president Dick Cheney, Liz Cheney has become a symbol of a dwindling band of Republicans largely opposed to Donald Trump’s vice-like grip on the party. Even though she is a staunch conservative, she has faced implacable hostility from Trump and his loyalists.

Cheney had faced the threat of removal from her leading role before, but she survived that handily, in part, thanks to support from other members of Republican leadership. This time is different though. Cheney has lost support from Congressman Kevin McCarthy of California, the House minority leader, and Congressman Steve Scalise of Louisiana, the House minority whip.

The main driver behind the attack on Cheney, though, has been Trump, who has fumed about Cheney’s criticism and her decision to vote to impeach the president, alongside almost a dozen other House Republicans. Cheney has been the highest-ranking outspoken anti-Trump Republican in Congress. That stance looks to be felt back home where multiple candidates have jumped into the Republican primary to oust Cheney from her congressional seat.

Trump and his allies are assessing who to support in that primary. The former president’s political operation is watching the primary field closely, looking to see who might emerge as the strongest challenger to Cheney.

Cheney’s troubles are the latest sign that Trump’s influence is still hugely powerful within the Republican party, more so than any of the other recent Republicans who were elected president or were nominated to be president.

Liz Cheney has arrived at the Capitol for this morning’s vote on removing her as House Republican conference chair.

Asked by the New York Times about what this vote means for the GOP, Cheney said, “The party is going to come back stronger, and I’m going to lead the effort to do it.”

Minutes before House Republicans meet to vote Liz Cheney out of her role as conference chair, Donald Trump issued a statement encouraging them to do so.

“The Republicans in the House of Representatives have a great opportunity today to rid themselves of a poor leader, a major Democrat talking point, a warmonger, and a person with absolutely no personality or heart,” the former president said in a statement released by his political action committee.

“As a representative of the Great State of Wyoming, Liz Cheney is bad for our Country and bad for herself. Almost everyone in the Republican Party, including 90% of Wyoming, looks forward to her ouster—and that includes me!”

Trump and Cheney have repeatedly clashed since January, when the congresswoman issued a fiery statement explaining why she was voting in favor of impeaching the then-president for inciting the Capitol insurrection.

Some Republicans called for Cheney to be removed from her leadership role shortly after the impeachment vote, but House minority leader Kevin McCarthy stood by her. Now McCarthy argues that Cheney has become a distraction from Republican efforts to win control of Congress in next year’s midterms.

House Republicans will vote this morning on whether to remove Liz Cheney from her role as conference chairwoman over her criticism of Donald Trump and his lies about widespread fraud in the presidential election.

Cheney is widely expected to be ousted from her leadership role and replaced with Elise Stefanik, who has become a fierce defender of the former president.

Delivering a defiant speech on the House floor last night, Cheney warned that the country is experiencing a moment of crisis right now.

“Today we face a threat America has never seen before. A former president, who provoked a violent attack on this capital in an effort to steal the election, has resumed his aggressive effort to convince Americans that the election was stolen from him. He risks inciting further violence,” Cheney said.

The vote will get underway soon, so stay tuned.