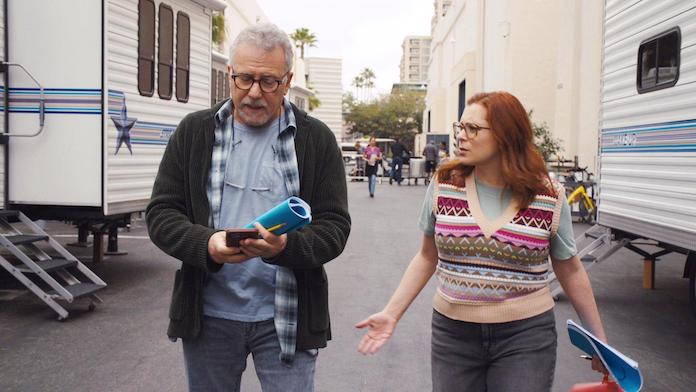 In case the title isn’t making it 100% clear, Reboot—created by Modern Family’s Steven Levitan—is a half-hour comedy in the present time about the reboot of a fictional half-hour sitcom called Step Right Up from the early 2000s. The reboot is the idea of Hannah (Rachel Bloom) who wants to bring back the original cast, eradicate the “always doing the right thing” schlock and retool the show as one where everyone makes the wrong decision.

Each cast member could use this reboot. Reed (Keegan-Michael Key) left the sitcom to pursue his thespian dreams and is now reading for walk-on parts as gangbangers and convicts. Once Reed left and the show was cancelled, Bree (Judy Greer) played a tentacled alien on a low-grade sci-fi show, married a duke of a small Scandinavian country, who cheated on her and she left him. Clay (Johnny Knoxville) is deep in recovery and having a hard time of it. Zack (Calum Worthy) who was the young boy on the show has grown into a taller, dorkier version of himself with a string of straight-to-video movies, a strong stock and real estate portfolio, but he remains a boy trapped in a bigger boy’s body with his mom in constant tow.

Hannah’s reboot is sharp, with a depth and gravitas the original was lacking. But, Hulu, the streamer that has greenlit Reboot brings in the original showrunner, Gordon (Paul Reiser), who reverts to corny jokes and hackneyed storylines. Their relationship is fraught, to say the least, but what’s at the core of it is what is driving the reboot.

Despite his old school, politically incorrect attitude, Gordon’s years of experience come in handy when dealing with high-strung and whiny actors’ personalities, at-odds creatives in the writers’ room, and generally getting people to do what you need them to do.

In the writers’ room where the real comedy gold of Reboot takes place. It’s three-on-three with Hannah’s hires: two young and hyper-socially aware overly fragile women of color and a natural and razor-sharp queer man who calls her out on her issues, nailing the heart of the matter more than once; against Gordon’s hires: two Jewish men who put their feet in their mouths more so than they do on the ground and Rose Abdoo as their cackling and thick-skinned foil. Their clashes are not as funny as when they get along, egging each other on and delivering some zingers in the process.

Much more engaging than Step Right Up’s original cast is new member, Timberly (Alyah Chanelle Scot) an influencer-turned-actor with a formidable social media following who comes to the show straight from her reality series, Fuck Buddy Mountain. She’s the one getting the most mileage out of the reboot, as is Elaine (Krista Marie Yu) who plays the tech genius-turned-network executive after a series of mergers. Elaine’s comedic timing is on-point, and one of the stronger aspects of Reboot, which is uneven, at best.

A parody in the extreme, Reboot is built on a great concept with an insider representation of what it’s like behind-the-scenes of a comedy series with tongue firmly in cheek. More often than not, however, in execution, it trips over its cleverness and becomes the very schlocky comedy it is trying to reboot itself out of. None of that matters when Reiser is on screen. He is an absolute treasure in any role. The show becomes quite meta when he takes the helm—which is every scene he’s in—and transcends as the real comedic lead of both Step Right Up and Reboot. He gives Bloom everything she needs to bat the comedy ball back as his straightwoman (pun intended as she makes a big deal about being queer) counterpart.

Reboot premieres with three episodes, which is exactly the right amount of content needed to get invested in what’s clearly Levitan’s drawn-from-real-life comdy and into the swing of the series, with subsequent episodes dropping weekly.