Donnell Russell previously pleaded guilty to “repeatedly and purposefully worked to silence ‘Jane Doe’ from revealing the emotional and physical trauma inflicted on her by R. Kelly and his associates”

A man who described himself as the self-styled manager and advisor to disgraced R&B singer R. Kelly was sentenced to 20 months in prison Thursday after previously pleading guilty in federal court Thursday to stalking and harassing one of Kelly’s sexual abuse victims.

According to a release from the Department of Justice, Donnell Russell, 47, was charged with interstate stalking and used phone calls, emails and text messages in an attempt to harass and intimidate the victim, identified only as Jane Doe, as well as her mother. Russell, who is scheduled to be sentenced November 17, faces a up to five years in prison.

“Russell used threats, harassment and intimidation in a deliberate effort to silence one of R. Kelly’s victims and prevent her voice from being heard,” United States Attorney Breon Peace said in a statement. “When his initial effort failed, he continued his vile campaign by sending threatening messages to Jane Doe and her mother, and publishing explicit photos of the victim on the internet before and after Kelly was indicted. As this prosecution makes clear, the defendant’s conduct was not only reprehensible, but it was also criminal and will not be tolerated.”

Russell’s guilty plea comes less than a week after he was convicted on charges stemming from a gun threat he made aimed at disrupting a New York City screening of Lifetime’s bombshell six-part docuseries Surviving R. Kelly in Dec. 2018.

Between November 2018 and February 2020, Russell threatened to publish sexually explicit photographs of Doe if she did not withdraw her civil suit against the singer. “Pull the plug or you will be exposed,” he wrote in a text sent Jan. 3, 2019. Russell also used an alias to create a Facebook page titled “Surviving Lies” — a deliberate play on Surviving R. Kelly — where he posted the same explicit photos and text messages between himself and the victim. He also appeared on two livestreams in early 2020 to air his support for Kelly while also demeaning Doe and displaying the same sexually explicit photos. 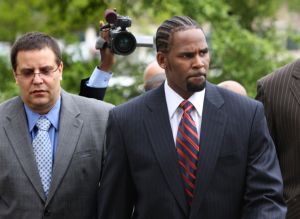 “Through the use of intimidation tactics, Russell repeatedly and purposefully worked to silence ‘Jane Doe’ from revealing the emotional and physical trauma inflicted on her by R. Kelly and his associates,” said Homeland Security Investigations Acting Special Agent-in-Charge Ricky J. Patel. “Despite multiple threats, Russell ultimately failed in his efforts and will now face the consequences of his despicable behavior.”