Public Enemy’s Chuck D has sold a sizable chunk of his songwriting catalog to his longtime publisher, Reach Music.

Songwriting royalties are split in two — the writer share and the publisher share — and as part of this new deal, Reach Music has acquired 100 percent of Chuck D’s writer’s share in his publishing. The company has also purchased 50 percent of Chuck’s copyright interest in the publisher’s share (Chuck will hold on to the other half). A fee for the deal was not disclosed.

The sale doesn’t cover the entirety of Chuck D’s output, but it includes over 300 songs and Public Enemy’s most formative work released between 1987 and 2012. During that period, Chuck D and Public Enemy released several classic albums, including It Takes a Nation of Millions to Hold Us Back, Fear of a Black Planet, and Apocalypse 91… The Enemy Strikes Back. Chuck D co-wrote pretty much all of Public Enemy’s songs during this time, including classics like “Bring the Noise,” “Fight the Power,” and “Welcome to the Terrordome.”

Chuck D and Reach have been working together for over 20 years, and Reach will continue to administer the copyright interests in the rapper’s catalog that it now owns. “[D]oing this deal was the right timing for a forward and logical evolution of our business together in an ever changing industry,” Chuck D said in a statement. “Reach has always been ahead of the curve on establishing respect for the HipHop genre songwriting and publishing-wise, and they will continue taking care of my works.” 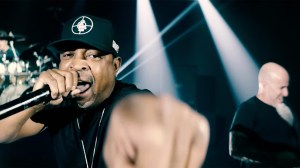 Reach’s president, founder, and owner, Michael Closter, added, “I’m so grateful to Chuck for our business together as his music publisher throughout these many decades. There’s no one more consequential in the world of Hip-Hop than Chuck D, and he has written iconic and impactful songs that will forever be a part of music history. The team at Reach will continue working hard to protect these works while also introducing them to new generations to come.”

Major catalog acquisitions have been a constant story in the music industry over the past couple of years, with major artists from Bob Dylan, Bruce Springsteen, and Stevie Nicks, to John Legend, Justin Timberlake, and Red Hot Chili Peppers selling chunks of — if not all of — their publishing copyrights (and in some cases, the rights to their even more lucrative master recordings). Despite this gold rush, not a whole lot of cash has been splashed in hip-hop. Chuck D is the rare rapper to sell a stake in his publishing, while others to strike deals include the celebrated producers No. I.D. and Marley Marl.