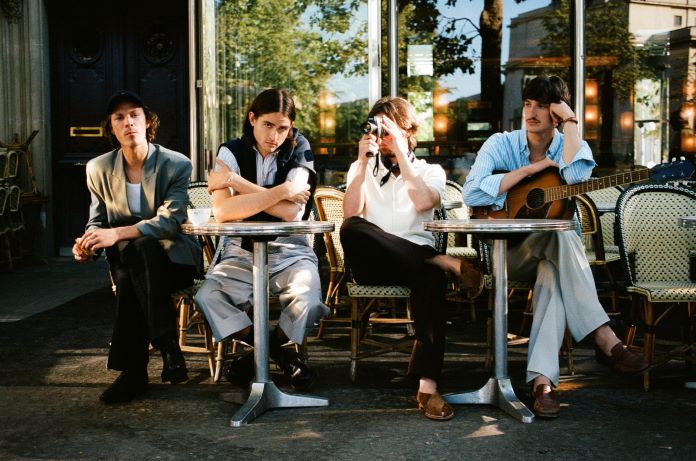 Photography by Jay Paulo A. Rodriguez

Fans last heard from the sunny German indie pop outfit Rikas last year with their EP, Short Stories. In the year since the band have once again been at work, recording another new EP, Goodbye Sunshine, due out later this year. The band’s new EP also sees them collaborating with producer Jonathan Rado of Foxygen, who brings out the band’s latent ‘60s California pop influences into the hazy light of day.

Rikas have already shared the record’s title track, as well as their subtly melancholic follow-up, “My Bench,” and today they’re back again with another new single, “Barefoot,” premiering with Under the Radar.

“Barefoot” finds the band at their most sunny and carefree, inviting the listener to kick off their shoes and spend a few minutes basking in stolen moments of summer love. Co-written with Dutch indie pop artist Benny Sings and produced by Jonathan Rado, the track is seemingly tailor-made for breezy bike rides and lounging beach days. Dreamy vintage keys and easygoing tropical-tinged percussion combine with the band’s airy harmonies, culminating in a lovely ocean-side jam session near the end. With the summer days waning away, Rikas have delivered a perfect ode to beach pop with “Barefoot.”

Rikas guitarist Sascha explains of the track, “We had the idea of a song that’s called Barefoot for a long time. We even had the topline for years stuck in our heads. On the very first day of the session, we came together in this beautiful studio right at the canal. After a quick chat we went in there, sat at our instruments and Tim (Benny Sings) told us to just jam around so he can get all the instrument signals. We started playing and immediately had a light and vibey feeling. The chords came together and carefully we started mumbling the old Barefoot line”. At the end of the ‘soundcheck’ the band asked Sings how he wanted to start writing. His response: “that’s already the first song, let’s write a chorus and the song is finished“.

Check out the song below. Goodbye Sunshine is due out everywhere later this year.

Beyoncé Will Reportedly Go On Tour Next Summer