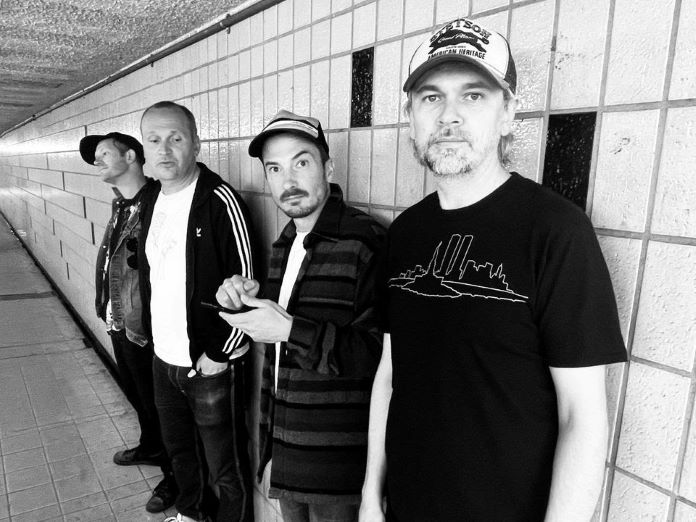 Fans last heard from long-running Brighton-based electronic outfit Fujiya & Miyagi with their 2019 record, Flashback. Over the band’s twenty-year career, they have consistently taken an ardent and expansive approach to electronic music, fusing elements from pop, house, disco, acid, krautrock, and more. Their discography acts as a sampling for decades of electronica, an approach they doubled down on for their newly announced forthcoming LP, Slight Variations.

As singer and guitarist David Best describes, “There’s two meanings behind Slight Variations as a title. The first being how although biologically we are pretty much the same it’s the differences that tend to define us and cause friction and misunderstandings. The second is a nod to the suggestion that all our records sound similar to one another, when they all sound quite different to me. There’s a thread running through everything we do but we’ve always tried to push things forward.”

The full album is out September 30th via the band’s label, Impossible Objects of Desire. Accompanying the announcement, the band have also shared an early listen to the record’s title track, premiering with Under the Radar.

“Slight Variations” opens the record with a pulsing dancefloor gem, pulling together house and disco beats with sharp funk guitar and backing vocals from Everything Shook. The band captures an addictive synthesis of sounds and genre, tightly packing the track with infectious grooves, jolting synth textures, and colorful lyricism. Like the best of the band’s work, “Slight Variations” shows their affection for the many sub-genres of electronic and dance music, crafting a track that manages to be sleek and propulsive while remaining insular and hypnotic.

Check out the song and video below, along with Best’s Q&A on the song and forthcoming record. Slight Variations is out everywhere on September 30th via Impossible Objects of Desire.

With regard to your forthcoming LP and the fact that it’s been a few years since the release of your last full-length, where did the writing process begin? And where, if from anywhere, did you draw inspiration?

Towards the end of 2019, Just before Brexit happened, we temporarily pulled down the shutters on shows as it was such an unknown situation. If you are a musician and you aren’t playing live it can be quite a solitary day to day existence compared to if you are working in a more populated environment. There’s plenty of pluses of course but this aspect can be tricky sometimes. The two songs that came out of that period were called ‘Innerspace’ and ‘Feeling the Effects (of Saturday Night)’. They both reflected the above and it seemed we were set for a slightly moody, introspective record, which I liked the idea of. Then the Pandemic hit and everyone became properly isolated from each other and their previous realities. The idea of an album based upon a sense of isolation became a less attractive proposition. No one wants to hear that. So we rewrote ‘Innerspace’ and it became ‘Sweat’, a slightly less obvious reflection of our then current situations. During this time we didn’t see each other for around a year and time shrank for everyone but some of us were quite productive in that period. We were conscious of not wanting to make a ‘lockdown’ record, so once we could meet up we took those initial songs and made a more live sounding record. It was simultaneously informed & repelled by the situation we were all in. Coming out of that we were also thinking ‘what type of songs do we want to play live to people when all this is over?’ and Slight Variations was the end result.

You spoke on how you wanted this record to be a solid introduction to this project and “everything [you’re] about.” How would you describe the takeaway from this record in that regard?

I think if you’d never heard of us before this record would be a good place to start, or if you perhaps enjoyed ‘Transparent Things’ but lost touch with what we do then this is the record to get back in touch. It builds upon our initial aesthetics whilst still being identifiably us. It seems we are in a golden age of effects pedals & it’s been really fun to explore different sounds & textures, especially when we couldn’t do much else. In that respects making this record, at least initially, was a real link to the outside.

What made you choose “Slight Variations,” the title track, as the record’s newest single? What is its significance to you?

When you’ve been making music for a long time your idea of what makes a successful song can shift & become far more multi-faceted. I used to enjoy the idea of words rubbing the music up the wrong way, so you had this kind of friction. I’m still interested in this idea but it’s currently been done to death. My very favourite songs by other people tend to be those that seem effortless & almost like they’ve always existed. For me the title track ’Slight Variations’ is on the way to accomplish this, as it sort of glides and all the moving parts dovetail into one another.

There also seems to be a running theme of space, or lack of it, on the record. Obviously for a lot of people their immediate environment, as well as the world in general, has shrunk. My generation is one where growing up we were almost defined by our possessions, whether that’s what records we had, or books we read, or clothes we wore. With advances in technology, communication & how we consume stuff it doesn’t feel like it’s any longer like that for most people. In a way, I’m jealous that future generations won’t have all this baggage, but I still find it impossible to let go of it all.

LeBron James Names JAY-Z & Nas Albums Among His Favorite Ever

Watch: Vocalists From 2 Different Boy Groups Team Up For Special Duet Episode Of...

LeBron James Names JAY-Z & Nas Albums Among His Favorite Ever