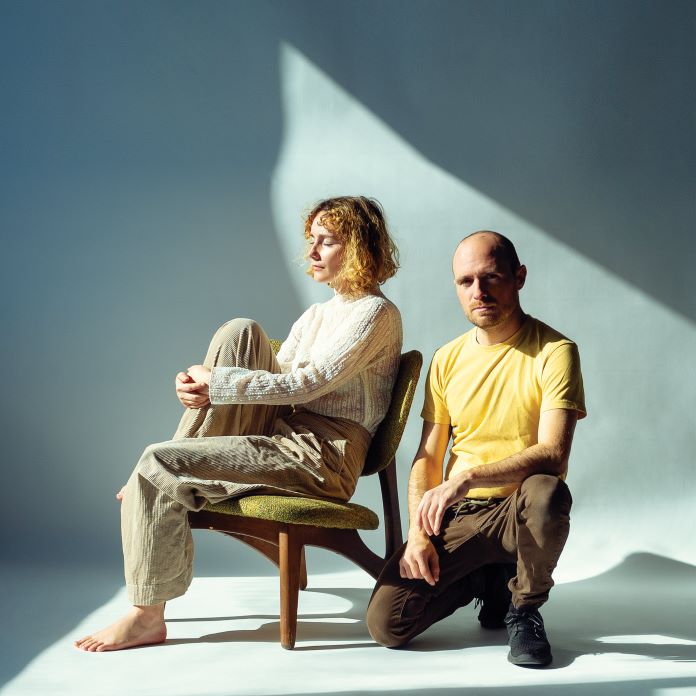 Montreal-based art pop pop duo Best Fern is the new project from Nick Schofield and Alexia Avina. The pair have both separately built careers around a shared talent for glassy ambient soundscapes and blissed-out melodicism, but Best Fern represents the pair’s first full-length collaboration, captured on their upcoming debut LP, Earth Then Air, out everywhere on February 3rd.

Recorded nestled in the Rocky Mountains at the Banff Centre for the Arts and Creativity, the record draws from the natural wonder of their surroundings, crystallizing both natural tranquility and wondrous scale within the record’s delicately crafted instrumentals. Accompanying the album’s announcement, the band have also shared a lead single from the record, “Way Inside,” premiering with Under the Radar.

“Way Inside” acts as a warm introduction to Best Fern’s sound, fusing together twinking ripples of keys, shimmering synth crescendos, and echoing vocal melodies from Avina. The pair craft moments of trance-like instrumental expanse, conjuring them to stand alongside glimmering pop melodies. The results feel fluid and wondrously dreamy, yet they also retain a gentle organic glow. Meanwhile, the lyrics share that same empathetic undercurrent, with Avina inviting a loved one to freely share their thoughts and feelings一“speak your mind wielding light, emanating to face the way inside.”

Schofield says of the track, “‘Way Inside’ was created during a two week residency at the Banff Centre in Alberta. Alexia and I were holed up in a cabin studio in the Rocky Mountains. We worked on new music every day surrounded by instruments. We traded playing piano, vibraphone and synths. Alexia wove guitar loops and sang the first incarnations of vocal ideas. I would take breaks to walk in the woods and swim in the pool. It was as idyllic as it sounds.

We were incredibly productive. Music was flowing but we started feeling oversaturated. Despite being creatively in sync we weren’t communicating very well as friends, and this song is a pretty honest reflection of that. Alexia’s lyrics are a reminder for us to put words to feelings so we can be open and honest with each other, because that’s how healthy friendships keep growing.”

Check out the song and video below. Earth Then Air is out February 3rd via Backward Music and Youngbloods.