The Fab Fourum News Your Beacon for News
Home Artist Pixies Debate the Merits of Van Halen, Drop Acid on ‘Dregs of the Wine’


Pixies guitarist Joey Santiago scores his first writing credit in the group’s storied, 35-plus-year history on “Dregs of the Wine,” the latest track to be unveiled from the upcoming album Doggerel.

“I guess I was in kind of a zombie state, just playing,” Santiago says of the initial instrumental idea. “After I stopped playing, I put it down and went, ‘Well, that was a fucking waste of time. What a piece of shit I am.’ I beat myself up a lot, but my girlfriend, unbeknownst to me, was recording me. She played it back to me, and I go, ‘Fuck! Hold on a second here! This stuff is good!’”

Pixies frontman Black Francis eventually added lyrics about “living in Los Angeles in the ‘90s with my then-wife, hanging out with Joey and his ex-wife, lots of trips to Las Vegas, a lot of drinking, little bit drug taking, some genuine good times.”

Those adventures apparently included debating the merits of Van Halen’s cover of The Kinks’ “You Really Got Me,” drinking underneath the Hollywood sign and/or dropping acid. Never shy about inserting surreal references into his lyrics, Francis mentions the late comedian Redd Foxx, the “smiling queen of Thailand” and flying a plane with “lion tamers” to Brazil. 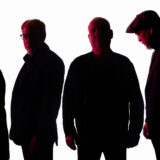 Doggerel is due Sept. 30 from BMG. Pixies will play a handful of October shows in support of it, beginning Oct. 1 in Anaheim, Calif.