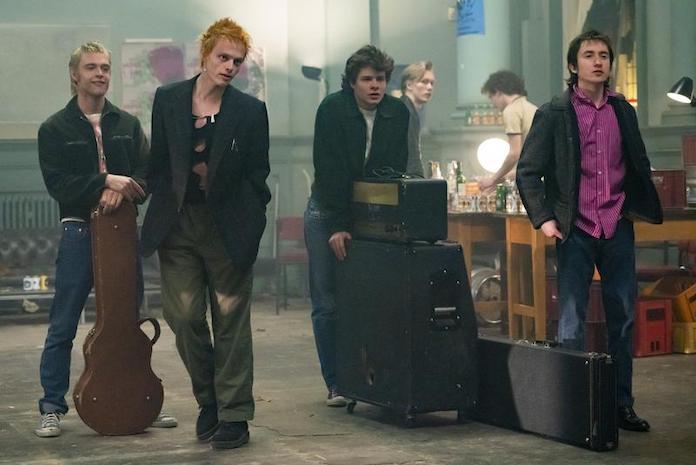 Music-based biopics, or series, such as the six-episode Pistol, the Danny Boyle-directed take on the rise and fall of the Sex Pistols, are often (but crucially, not always) a dodgy proposition. While a few have been terrific, many of them are poorly acted, stretch the truth one too many times for dramatic effect, and often miss what made, or makes, the artist great in the first place. While that is painting with broad strokes, this semi-authorized series, based on guitarist Steve Jones’ autobiography Lonely Boy (though it should be noted that singer John Lydon has vilified its existence) falls somewhere in the middle.

The series starts off in 1975 when then homeless teenager Jones wanders into Vivienne Westwood’s boutique SEX and ends only a few years later when bassist Sid Vicious (who replaced original bassist and main songwriter Glen Matlock) dies of a heroin overdose in February 1979.

The series avoids the pitfalls of poor acting. All of the regulars are very good here, most notably, Toby Wallace as Jones, Sydney Chandler as Chrissie Hynde and Thomas Brodie-Sangster as Pistols manager, the Situationist-inspired provocateur, Malcolm McLaren, to whom Brodie Sangster bears more than a passing resemblance. The series also does an admirably nice job of portraying the close friendship of Jones and drummer Paul Cook. They went on to play together in The Professionals after the breakup of The Sex Pistols. It also puts a spotlight on the deep friendship between Jones and Hynde.

Anson Boon’s Lydon and Louis Partridge’s Vicious, however, rely too much on cartoon-ish tropes seemingly borrowed from Alex Cox’s wonderfully-acted but spotty 1986 film Sid and Nancy. It’s clear that the actors, and Boyle, had seen Sid and Nancy, and imbibed its spirit in creating this new series. The same could be said for the series as a whole. But why stretch the truth when it is a fascinating enough story on its own, without any tinkering? For instance, (minor spoiler ahead) Ohio-born Hynde has said that she never tried to marry Jones in order to stay in the U.K., despite the series showing otherwise.

Nevertheless, despite these stumbling blocks, it is an entertaining, extremely binge-able show that makes this old fan wonder if they’ll follow up with a Season Two. If so, where could they go? While this was intended as a “one and done” limited series, could it potentially delve into the individual members’ post-Pistols projects as well as those of Bromley contingent notables like Siouxsie Sioux and Billy Idol? While the series has kinks to work out, the prospect of another season (or more) detailing what the members did afterwards would be fascinating to watch and perhaps less cartoon-ish than aspects of Season One that have been documented ad nauseam. (www.fxnetworks.com/shows/pistol)

‘Creem gave you a ground-level excitement about music’: the 1970s rock magazine makes a comeback | Music

Tammy Buneta is today’s Team Rizz member of the day! – 105.7 The Point

How to Get Tickets to Los Ángeles Azules’ 2022 Tour