PnB Rock, best known for his groundbreaking take on the trap genre, was fatally shot in Los Angeles while dining at a South L.A. restaurant Monday afternoon.

According to the Los Angeles Police Department, the 30-year-old Philadelphia rapper, real name Rakim Allen, was killed after being shot “multiple times” at the Roscoe’s Chicken & Waffles location on Manchester Boulevard during the course of a robbery shortly at roughly 1:15 p.m. local time.

“The victim was eating at a table when he was approached by one suspect,” LAPD Officer Norma Eisenman said to Rolling Stone, noting that the “suspect demanded items” from the rapper. “The suspect removed some items from the victim then entered a waiting vehicle and fled the scene.”

The rapper was rushed to an area hospital, where he was pronounced dead at 1:59 p.m. As of now, LAPD officials haven’t named a suspect in the shooting — but sources previously told the Los Angeles Times that PnB may have been targeted for his jewelry.

PnB was reportedly at Roscoe’s with his girlfriend, with social media users noting she had shared a geotagged image of her food to Instagram in a since-deleted post, according to the Times.

The rapper signed with Atlantic Records in 2015 after the success of his 2014 Real N*gga Bangaz mixtape, which he wrote while incarcerated. His debut single “Fleek” was a national introduction to the rapper’s unique melodic flow, while his follow-up “Selfish” reached No. 51 on the Billboard Hot 100. Along with his sultry take on the genre, the rapper also used his platform to explore the systemic ills in his native Philadelphia, as evidenced on his introspective 2014 track, “My City Needs Something.” In 2019, PnB collaborated with Ed Sheeran and Chance The Rapper on “Cross Me,” a groovy electropop single off Sheeran’s fourth studio album, No.6 Collaborations Project. 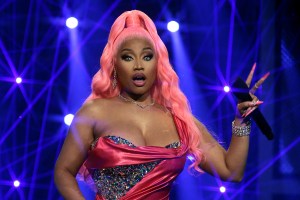 Lupe Fiasco Breaks Down JAY-Z’s ‘GOD DID’ Verse: ‘It’s Not His Best’

Just a week ago, PnB Rock spoke with media personality DJ Akademiks, where he recalled a previous incident that happened “mid-pandemic” during which someone unsuccessfully tried to rob him while visiting L.A. with his girlfriend and daughter. “I don’t be outside,” he said about his L.A. lifestyle, adding, “I’m not going to put myself in those situations ‘cause I know what happens in those situations.”

This is a breaking news story and will be updated.

Yungblud on his new album and the importance of self-acceptance