Ozzy Osbourne made his Comic-Con International debut at this year’s event on Friday, July 22 in San Diego, California. Osbourne and Todd McFarlane revealed artwork for the limited-edition special McFarlane-designed comic book (that is available that is part of some of the special-edition “Patient Number 9” album packages) along with a signing at the Stern Pinball/Rebellion Republic booth.

Entertainment Tonight ‘s Matt Cohen spoke with Ozzy at Comic-Con International, where he offered an update on his health since he was released from the hospital last month following major surgery.

“It’s great, it’s great,” Osbourne said. “I like to see people, you know. That’s been the hardest thing of the past three years, because I’ve been trying to recover from my surgery. I’m getting there. It’s a slow climb back, you know?”

On June 13, Ozzy underwent grueling surgery to remove and realign pins in his neck and back. At the time, an Osbourne family source told Page Six that there would be a “lengthy amount of convalescence” after the operation and that the legendary heavy metal singer would need a nurse at home.

The source added: “Ozzy is 73 and any kind of surgery when you get older is difficult. This is quite major. He’s having the pins in his neck and back realigned from when he had a fall back in 2019. He’s been in a lot of pain.”

A few days prior to the surgery, Ozzy‘s wife and manager Sharon said that he was about to undergo a “major operation” which would “determine the rest of his life.”

In May, Ozzy confirmed to Classic Rock magazine that he was “waiting on some more surgery” on his neck. “I can’t walk properly these days,” he said. “I have physical therapy every morning. I am somewhat better, but nowhere near as much as I want to be to go back on the road.”

Ozzy, who revealed two years ago that he was battling Parkinson’s disease, has reportedly applied for permission for a “rehabilitation” wing at his historic Grade II listed home in Buckinghamshire, England. According to the Daily Mail, the extension will feature “an abundance of stopping and sitting” spaces, “discreet grab rails and aids” and “soft non-slip surfaces” as well as a self-contained nurse’s flat. There is also a “pool house orangery”, “garden room” and a “health and welfare exercise studio”.

Architect Lynne Walker wrote in the plans that “it is the ambition that the design creates a transition of flowing inside outside garden spaces, largely lit by natural light with folding doors opening up views.”

Last November, Ozzy‘s previously announced European tour with guests JUDAS PRIEST, originally set for 2019 and then rescheduled three times, was once again postponed. The new dates will now take place in May and June 2023.

Ozzy initially scrapped his entire 2019 schedule as he recovered from surgery to repair an injury sustained while dealing with a bout of pneumonia. The tour was postponed a second time after Ozzy continued to deal with health issues following a fall in his Los Angeles home. That fall “aggravated years-old injuries” from an ATV accident that occurred in 2003. The tour was pushed back a third time in October 2020 due to the coronavirus pandemic.

In May 2020, Ozzy‘s son Jack said that his father will “probably” retire “within the next five to ten years.” But Ozzy, who turned 73 in December, has repeatedly said that he is not calling it quits, despite the fact that his “No More Tours 2” — whenever it ends up happening — is being billed as his last major global trek.

I got to meet the Prince of Darkness! #OzzyOsbourne had a special signing for his new album #PatientNumber9 coming 9/22!…

Ozzy’s new album art by Todd McFarlane. We received a lithograph and they both signed it.

Enjoy and Be Safe.

OZZY & TODD!! Signing right now at our booth at Comic-Con – WE’RE SO EXCITED!!

Two legends together at the Stern Booth at Comic-Con International 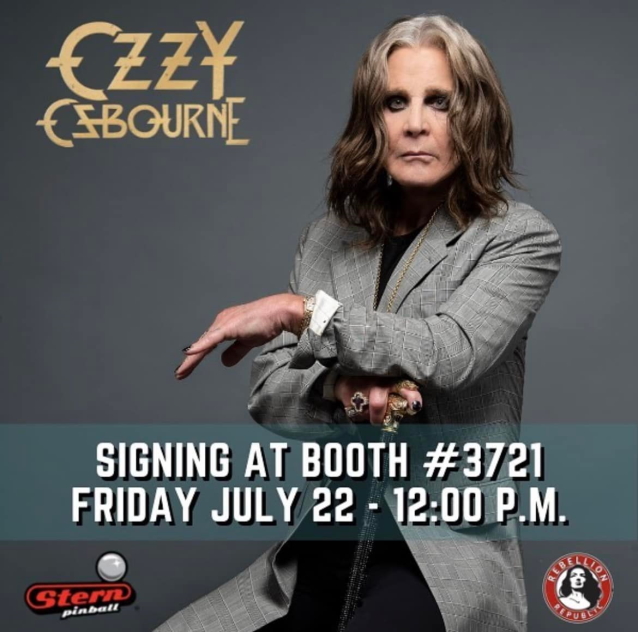