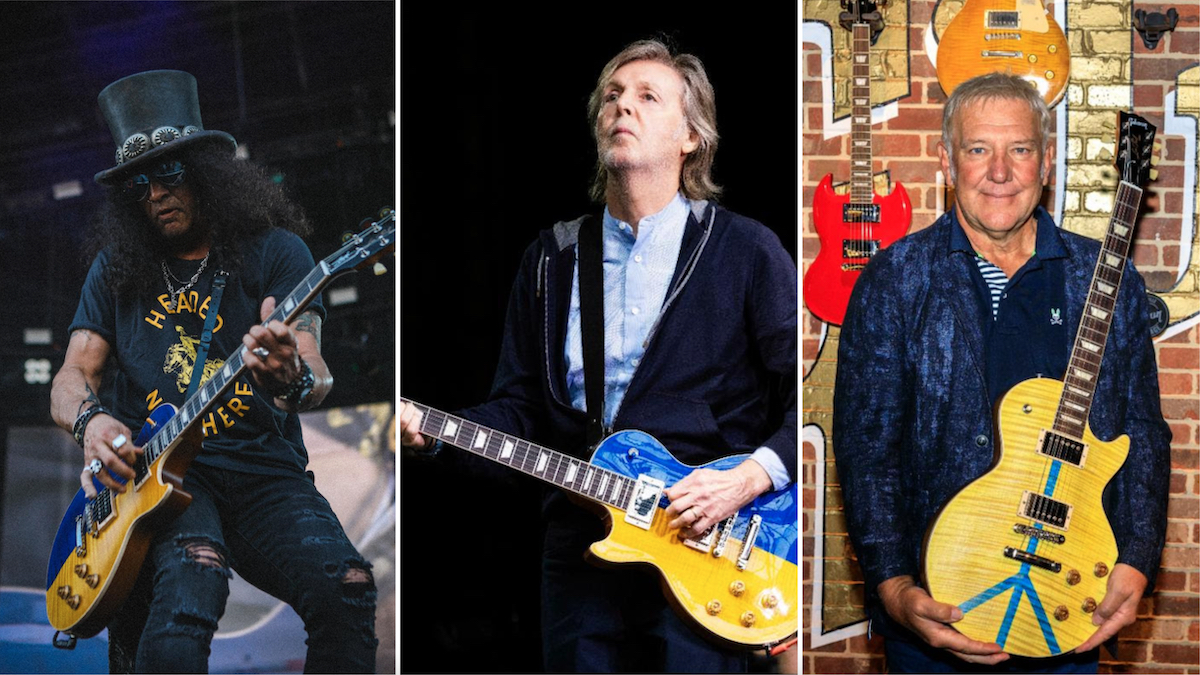 Gibson Gives, the philanthropic arm of instrument brand Gibson, has announced a limited edition run of Les Paul guitars with 100 percent of proceeds going to humanitarian efforts benefitting the people of Ukraine. Each guitar will be auctioned with an autograph book including signatures from Paul McCartney, Slash, Rush’s Alex Lifeson, The Rolling Stones, and many more.

Each of the three models of Guitars for Peace proudly display the blue and gold colors of the Ukrainian Flag on its body, emblazoned with birds or a peace sign. Other artists that contributed to the autograph book incude Fher Olvera of Maná, Nile Rogers of Chic, Mark Knopfler, Lzzy Hale, Margo Price, Blossoms, The Fratellis, Kasabian, Madness, Maisie Peters, Paloma Faith, The Charlatans, The Vaccines, Toyah, My Chemical Romance, and more.

Bidding for Guitars for Peace and their autograph books begin October 11th. They’ll conclude with live auctions on November 11th, 12th, and 13th, online and in-person at the Hard Rock New York. If you don’t feel like bidding a pretty penny, but still want to contribute, Gibson Gives are also offering Guitars for Peace t-shirts with proceeds going to the Disaster Emergency Committee for humanitarian aid in Ukraine.

“I’m happy to auction this beautiful guitar of mine to benefit the fine people of Ukraine,” McCartney said in a press release. “Hopefully it will help them through this aggressive Russian invasion.” Lifeson added: “Once again, Gibson Gives rises to the occasion! I’m proud to count myself in as a supporter of the Guitars for Peace initiative in aid of the people of Ukraine.”

Head over to the Julien’s Auctions website for more information about Guitars for Peace.

McCartney just capped off his 2022 tour with a performance at the Taylor Hawkins Tribute Concert in London. Slash recently dusted off some Guns n’ Roses tunes for a Capital One commercial, while Lifeson’s new band Envy of None shared their debut LP earlier this year.

GRiZ Announces Return Of ‘Another World’ in October at 1STBANK Center