Former SEPULTURA members Max Cavalera and Igor “Iggor” Cavalera kicked off the 2022 “Return Beneath Arise” tour last night (Sunday, May 22) at the Sunshine Theater in Albuquerque, New Mexico. Fan-filmed video can be seen below.

“Return Beneath Arise” sees Max and Igor performing select tracks from SEPULTURA‘s seminal “Beneath The Remains” and “Arise” albums. Joining Max and Igor on the trek are Mike Leon of SOULFLY and Daniel Gonzalez of POSSESSED.

When Leon and Gonzalez‘s addition to the touring lineup was first announced, Max said in a statement: “‘Beneath The Remains’/‘Arise’ tour is coming! Introducing on bass guitar, thrashing and blasting bass beast Mike Leon (SOULFLY) and on lead guitar, state-of-the-art death/thrash expert Daniel Gonzalez (POSSESSED/GRUESOME). We’re gonna take these songs to the metal world in the most brutal way ever! Under a pale gray sky, we shall arise.”

Added Igor: “We can only count with the illest players to step on stage with me and Max to play ‘Beneath’/‘Arise’. So getting Dan Gonzalez from POSSESSED/GRUESOME and Mike Leon from SOULFLY was an amazing choice!… Can’t wait to hit the road!”

Said Leon: “I am super excited to be a part of the revival of these classic albums with the brothers that created them. It is a great honor! These shows are gonna CRUSH, and I’m sure that we are gonna deliver these songs better than they have ever been played before to everyone who joins us! See you on the road!”

Stated Gonzalez: “It would be an understatement to say that I am incredibly stoked and honored to be able to play with Max and Iggor, and the fact that we’ll be playing material from ‘Beneath The Remains’ and ‘Arise’ is beyond surreal to me since I grew up worshiping those albums. Max and Iggor helped change the standards of extreme metal and those albums are still living proof of that. It’s insane to me as a fan and as a musician to be able to play these songs live, and I can’t wait to do them justice!!!”

Max and Igor kicked off a tour celebrating “Beneath The Remains” and “Arise” back in 2018. In early 2020, Max revealed plans to bring the trek to the U.S., but no dates had been announced prior to the pandemic.

In a 2018 interview with Wall Of Sound, Max stated about revisiting the “Beneath The Remains” and “Arise” material on the most recent run of shows: “I had to learn those riffs again for the tour, and I had to rediscover the albums again. It was a really fun process, learning the lyrics again. I kind of fell in love with the albums again. I don’t have a favorite — I like both together, and I think they’re meant to be together. For some reason, they just feel right when you play them together. I was very young when I made them, so it made me very aware of my state of mind at the time. I feel like I’m pretty much the same guy. I’m [52] now, but I’m still a metalhead in the heart. I still have the teenage spirit. I’m a huge metal fan, [a] huge supporter of metal. That’s just how it was when those albums were done. It’s a blessing that I get to do that with my brother, especially after all we went through together and we didn’t speak for 10 years. Now, it’s good — we are in a good place, and our brotherhood is really good, and we’re just having fun with this music… There’s an energy and a real anger and real passion in those songs that translates into people losing their minds when they hear it. I don’t even have to tell them, ‘Circle pit’ — they will do it themselves. It’s just the power of music.”

In 1996, Max exited SEPULTURA after the rest of the band split with Max‘s wife Gloria as their manager.

Igor left SEPULTURA in June 2006 due to “artistic differences.” His departure from the band came five months after he announced that he was taking a break from SEPULTURA‘s touring activities to spend time with his second wife and their son (who was born in January 2006). 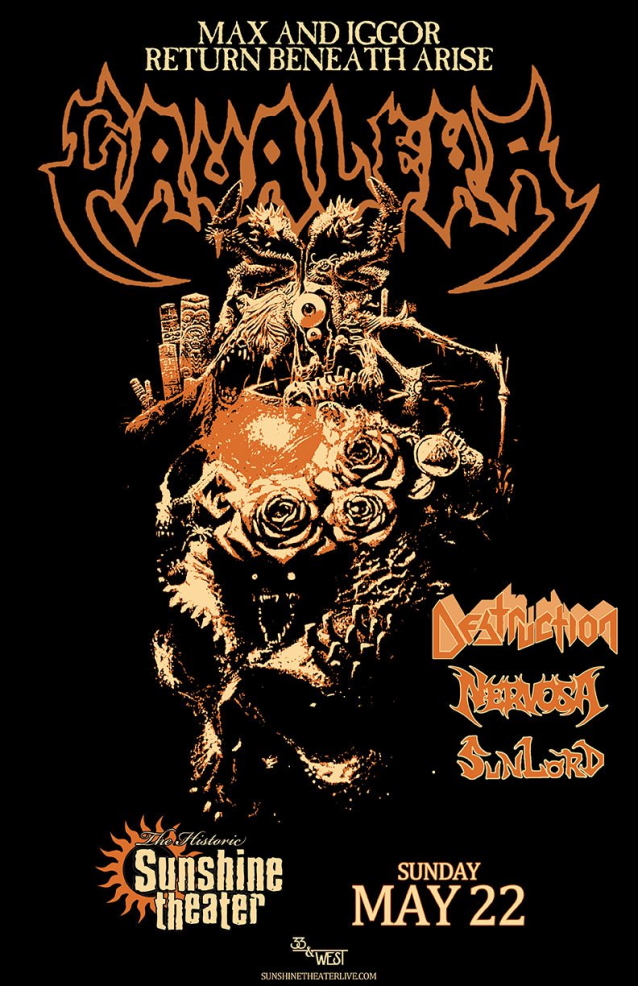