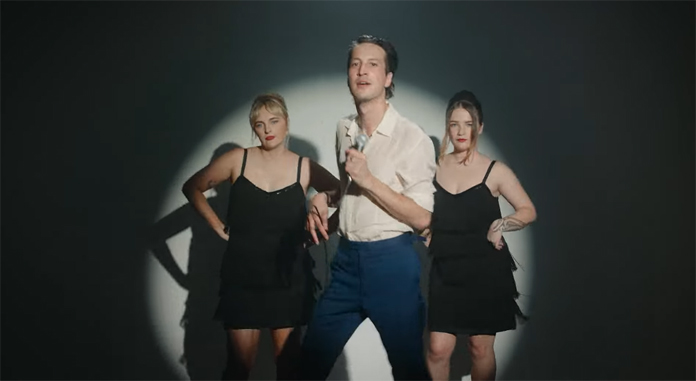 My Boy Due Out This Friday via Dead Oceans

New Zealand singer/songwriter/guitarist Marlon Williams is releasing a new album, My Boy, this Friday via Dead Oceans. Now he has shared its fifth single, “Don’t Go Back,” via an amusing self-directed video for the new song. Watch it below, followed by his upcoming tour dates.

Williams had this to say about the video in a press release: “It closely follows the narrative of the song, best summed up in the hackneyed old adage ‘nothing good happens after midnight.’ I play a sort of furry guardian angel (inspired very loosely by Frank the Rabbit from Donnie Darko), who leans on his young charge to turn away from the debauched scene of a house party and head back home. The young man heads in anyways and checks it out before pretty promptly deciding to heed the advice and get the hell out of dodge.”

Williams also had this to say about the song: “There are a lot of New Romantic influences in ‘Don’t Go Back.’ I love the songwriting and over-the-topness of bands like Duran Duran. I was too young to have a sense of it the first time around, but at least to the modern ear there’s a silliness to the pathos in that music that definitely had an influence on the tone of the record.”

Williams opted not to record My Boy with his long-time backing band The Yarra Benders. Instead he demoed half the album with Mark ‘Merk’ Perkins. Then he worked with producer Tom Healy (Tiny Ruins, The Chills) at Neil Finn’s Roundhead studios in Auckland in late 2020. There he worked with LA-based drummer Paul Taylor (Feist), bassist Cass Basil (Ladyhawke, Tiny Ruins), and Healy on guitars and synths. There were also appearances from Delaney Davidson and Elroy Finn (on drums and percussion). Dave Kahn is the only member of The Yarra Benders to play on the album.

“Having new personalities in the room allowed me to escape myself,” said Williams in a previous press release. “When everyone’s still working out each other’s roles, there’s an unsettling and exciting tendency to go off in different directions…. It happened naturally. I was listening to more steely, New Romantic stuff, like Duran Duran, John Grant, Perfume Genius, the Bee Gees. All those things fed into the machine.”

Of the themes on My Boy, Williams said: “There’s a lot of male shapes on the record. Growing up an only child, I had to outsource my brothers and build a world around me. So while masculinity is a big theme, it’s really subsumed by broader explorations of vitality, and the social and cultural value placed on legacy.”

Williams’ last full-length was his sophomore album, Make Way For Love, released back in February 2018 via Dead Oceans. In 2019 he released his first official live album, Live at Auckland Town Hall.

Williams has also been acting of late, appearing in the Netflix DC Comics TV adaptation Sweet Tooth, as well as acting in the films The True History of the Kelly Gang, Lone Wolf, and The Beautiful Lie. Williams also appeared in the hit Bradley Cooper/Lady Gaga musical romance A Star Is Born, playing himself as a younger star tapped to lead a Roy Orbison tribute at the Grammys instead of Cooper’s somewhat aging rocker Jackson Maine.

“I’ve always explored different character elements in my music,” said Williams. “And I think the more I get into acting, the more tricks I’m learning about representation and presentation. I’m trying to make my worlds feed into each other as much as possible. To get braver and bolder with exploring shifting contexts and new ways of doing things.”

Read our 2017 interview with Marlon Williams on Make Way For Love.

Read our 2016 interview with Marlon Williams.

Björk Shimmies in a Mushroom Forest in ‘Atopos’ Video

Jung Il Woo And Girls’ Generation’s Yuri Get One Step Closer To Romance In...

Ways to Stream & Pre-Order the Series On Blu-Ray – Billboard