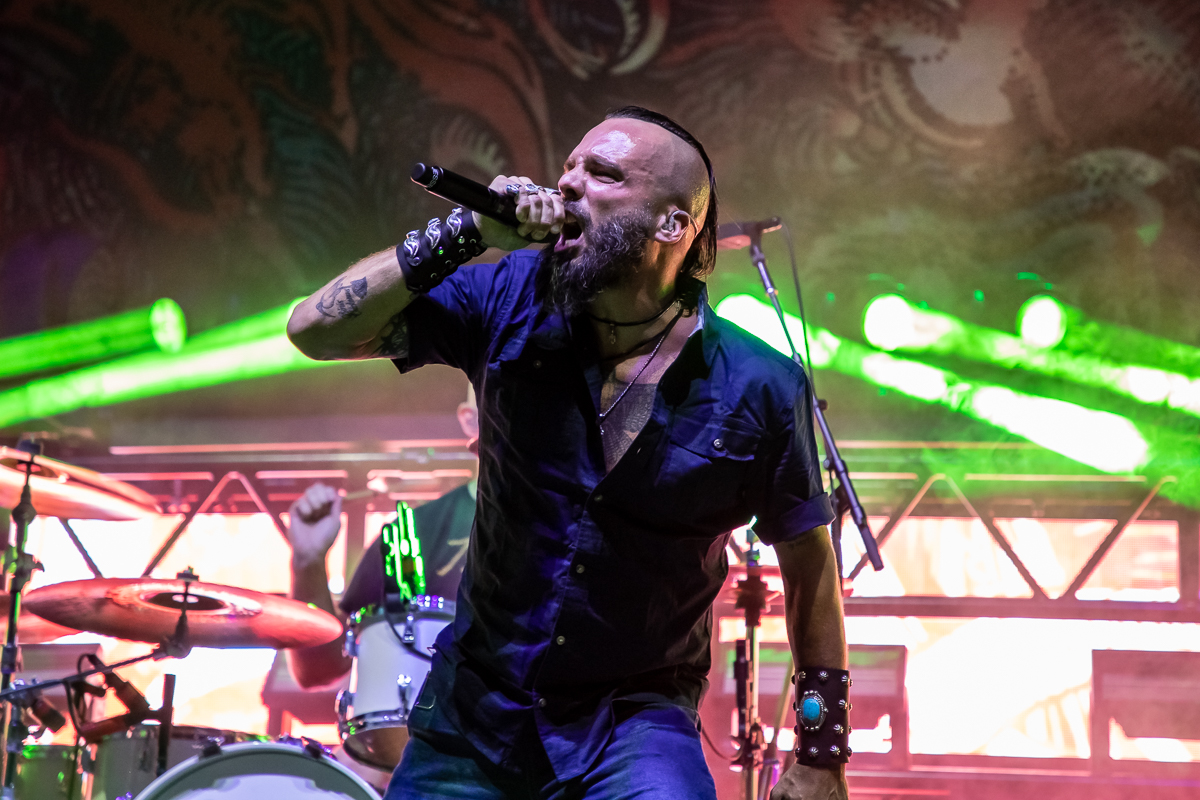 Lamb of God launched their Fall US “Omens” tour on a beautiful night at the Coney Island Amphitheatre in Brooklyn, New York, on Friday (September 9th), complete with an impressive support lineup that included Killswitch Engage, Baroness, and Suicide Silence.

For this headlining run (tickets available here), Lamb of God are not messing around, bringing along a breathtaking stage show, complete with loads of pyro, smoke machines, and a mesmerizing “Omens” triangle backdrop. Kicking off with “Memento Mori” from their excellent self-titled 2020 album, the Richmond, Virginia, metallers brought an explosive energy from the first note of the their set. Things heated up even more for “Walk With Me in Hell,” when the band’s pyro display was in full effect.

Singer Randy Blythe is one of metal’s most fearless and relentless live performers. After a quarter century of fronting the band and at age 51, he continues to take potential ankle-breaking leaps all over the stage. Seeing him fly in the air against the flames from the pyro brings a further element of danger to the band’s already incendiary performance.

Lamb of God’s 15-song setlist culled from their entire career, including “Nevermore” and the title track from the band’s forthcoming album, Omens, which arrives on October 7th. Before the final song, the old favorite “Redneck,” Blythe yelled, “Warriors, come out to plaaayyyyyy!” — delivering a memorable line from the classic 1979 movie The Warriors, centered around a Coney Island gang. And that’s exactly what Lamb of God did on Friday night — they came out to play!

Prior to Lamb of God taking the stage, Killswitch Engage also delivered a 15-song set, with singer Jesse Leach expressing pure joy for being able to entertain a packed crowd following a time when the future of the concert industry looked bleak due to the pandemic. The veteran metal act looked very much like a headliner themselves, giving a heartfelt performance that highlighted their 20-plus year career, including four songs from 2019’s Atonement, along with their signature cover of Dio’s “Holy Diver.”

Baroness were the second band of the night, and also gave a powerhouse performance. Frontman John Baizley and guitarist Gina Gleason threw their hearts and souls into the band’s all-too-short six-song set that deserves at least a few more tunes, as it ended way too soon.

Meanwhile, Suicide Silence offered a crushing opening to the night’s festivities, taking the stage at a rather early 6 p.m. as the crowd was still filing in to the outdoor venue, which sits right next to the Coney Island Boardwalk along the Atlantic Ocean.

Lamb of God’s US outing runs through an October 20th concert in Irving, Texas. Killswitch will remain on the bill throughout, while the tour will feature a rotating cast of opening acts that also includes Fit for an Autopsy, Spiritbox, Motionless in White, and Animals as Leaders.

See Heavy Consequence‘s photos, plus fan-filmed video of the Coney Island gig below, and pick up tickets to the upcoming shows via Ticketmaster.

Photo Gallery – Lamb of God, Killswitch Engage, Baroness and Suicide Silence in Brooklyn, NY (click to expand and scroll through):

All photos by Johnny Perilla (@johnnyperilla).