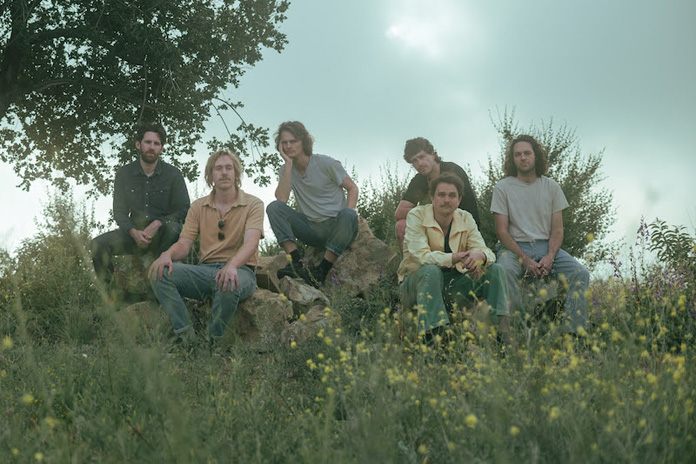 Melbourne-based psych-rock group King Gizzard & The Lizard Wizard have a reputation for being prolific and they are building on that by announcing three new albums, all due out next month. They have also shared a 10-minute long new song, “Ice V,” via a video. That song is the first single from Ice, Death, Planets, Lungs, Mushrooms and Lava, the first album, which is due out October 7. Laminated Denim follows on October 12 and then Changes comes out October 28. All are being released via the band’s own KGLW label. Check out “Ice V” below, followed by tracklists and cover art for all three albums, as well as their upcoming tour dates.

For Ice, Death, Planets, Lungs, Mushrooms and Lava, the band didn’t write any songs prior to entering the studio.

“All we had prepared as we walked into the studio were these seven song titles,” says the band’s Stu Mackenzie. “I have a list on my phone of hundreds of possible song titles. I’ll never use most of them, but they’re words and phrases I feel could be digested into King Gizzard-world.”

Mackenzie picked out seven titles from that list, ones that he felt “had a vibe.” A press release says he “then attached a beats-per-minute value to each one. Each song would also follow one of the seven modes of the major scale: Ionian, Dorian, Phrygian, Lydian, Mixolydian, Aeolian, and Locrian.”

The band then recorded over the course of seven days, producing four-to-five hours of jams. “Naturally, each day’s jams had a different flavor, because each day was in a different scale and a different BPM,” Mackenzie says. “We’d walk into the studio, set everything up, get a rough tempo going and just jam. No preconceived ideas at all, no concepts, no songs. We’d jam for maybe 45 minutes, and then all swap instruments and start again.”

At the end of each day Mackenzie would take those jams and assemble them into songs, from which the band would oversdub additional instrumentation and then write lyrics as a group. “We had an editable Google Sheet that we were all working on,” says Mackenzie. “Most of the guys in the band wrote a lot of the lyrics, and it was my job to arrange it all and piece it together.”

Changes is actually an album King Gizzard & The Lizard Wizard have been working on for several years, first intending to release it in 2017, a year in which the band released five albums. “We really have been tinkering with it since then,” Mackenzie says.

“Every song is built around this one chord progression—every track is like a variation on a theme,” Mackenzie continues. “But I don’t know if we had the musical vocabulary yet to complete the idea at that time. We recorded some of it then, including the version of ‘Exploding Suns’ that’s on the finished album. But when the sessions were over, it just never felt done. It was like this idea that was in our heads, but we just couldn’t reach. We just didn’t know yet how to do what we wanted to do.”

The frontman adds: “It’s not necessarily our most complex record, but every little piece and each sound you hear has been thought about a lot.”

The first letter of each song title on Changes spells out the album’s title.

Girls’ Generation’s Sooyoung Gives SONEs A Look At Her Luxuriously Decorated Home For The...