Justin Bieber has canceled the remaining dates on his “Justice World Tour” in order to “make my health the priority” during his ongoing battle with partial paralysis caused by Ramsay-Hunt Syndrome.

“Earlier this year, I went public about my battle with Ramsay-Hunt Syndrome, where my face was partly paralyzed,” Bieber wrote in a statement uploaded to his Instagram Stories. “After resting and consulting with my doctors, family, and team, I went to Europe in an effort to continue with the tour. I performed six live shows, but it took a real toll on me.”

He continued, “This past weekend, I performed at Rock in Rio and I gave everything I have to the people in Brazil. After getting off stage, the exhaustion overtook me and I realized I need to make my health the priority right now. So I’m going to take a break from touring for the time being.”

Representatives for Bieber did not immediately respond to a request for comment. Check out his full statement below.

Bieber unveiled his diagnosis in June, and shortly afterwards he also postponed all of his North American tour dates. In July, he set his return with a slate of overseas dates that would have run through March of 2023. The tour had come in support of his sixth studio album, 2021’s Justice. 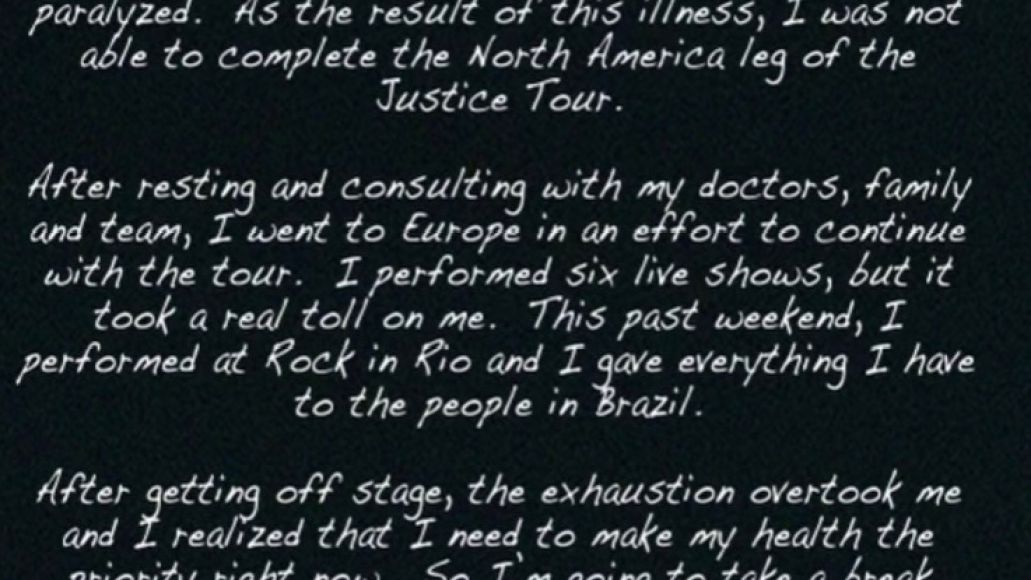