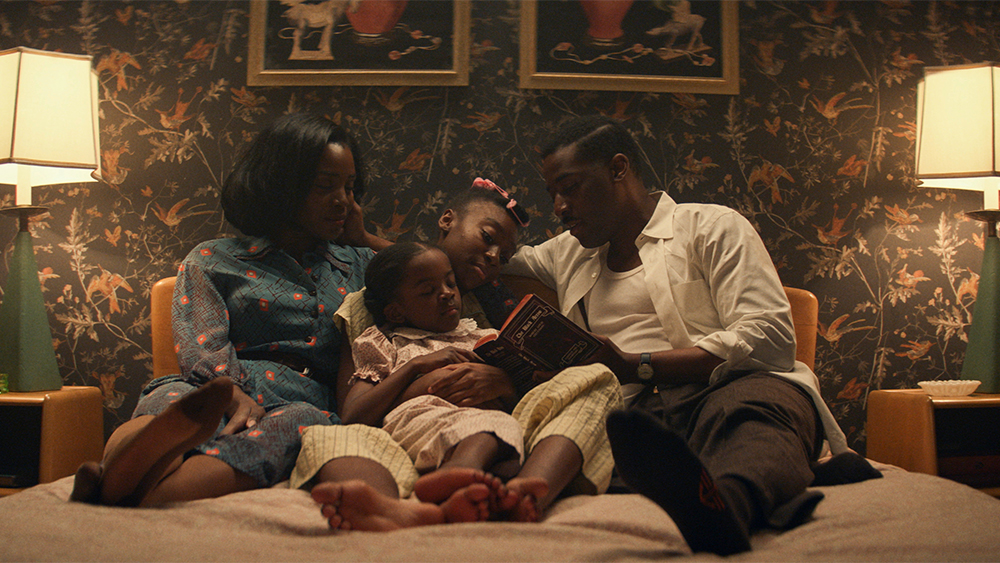 A drive-in premiere of the new Amazon Prime horror anthology series “Them” was held Thursday night in the parking lot at the City of Compton Resource Center, and it paid tribute to the city of its setting in many ways.

The Lena Waithe-produced show follows the Emorys, a middle-class Black family, who move into an all-white neighborhood in Compton, Ca. during the Jim Crow era and are forced to contend with racial terror outside their new home and the supernatural horror lurking within its walls.

The screening began with a taped introduction by Compton Mayor Aja Brown who then interviewed series creator Little Marvin in a pre-recorded segment. Marvin told Brown that he had always intended to set the show in Los Angeles and had discovered Compton’s little-known history during his research.

“Compton occupies a very specific place in the public imagination,” Marvin said. “It’s iconically Black — pop culturally, culturally and musically, what have you — but as I dug in, I realized that not only is that not true, but sixty, seventy years ago, it was quite white. Not only that, but the folks in east Compton were virulently protective of their whiteness and the block. It was just lightbulb after lightbulb after lightbulb, and I realized that we had found a home for the show.”

The Black family at the center of the story leave a traumatic past in North Carolina behind as they move cross-country in 1953 during the height of the Great Migration. Spanning from 1916 to 1970, the Great Migration saw the relocation of 6 million Black Americans from the south to the northeast, midwest and west. With “Them,” Marvin said he wanted to explore the American Dream as well as those who were given the keys to that dream, who were not and why.

“And particularly the most emblematic piece of the American Dream, in my eyes, anyway, which is the dream of homeownership,” Marvin told Brown. “It’s a point of great pride particularly for Blacks in this country, also because we have been disenfranchised from the real estate market since the dawn of the real estate market. So being able to explore the sort of darkness beneath the dream of homeownership and beneath the American Dream was the origin of the story.”

One of the first challenges faced by the Emorys upon their arrival in East Compton is the discovery of a racial covenant in their housing contract. Racial covenants were contingencies written into legal documents that restricted the purchase of real estate by Black homeowners. Though the law was found legally unenforceable in California during a 1948 court ruling, Marvin said he wanted to delve into the legacy of segregation and its continued presence today.

Your Horoscope for the Week Ahead

“I think about my own journey and my own sort of questions and anxieties as it relates to real estate, which I know I share with many Black folks across the country,” Marvin said. “’Will I get that loan? Will I not get that loan? Will they look at my house? Is there a reason my house is getting appraised for less than it should be?’ These are all questions that are based on decades and decades of disenfranchisement within this market. I really wanted to explore that, the seed of that and also explore the fact that we are very much still living in a segregated country in many ways.”

However bleak the show’s material may seem, Marvin said he hopes to spark curiosity and compassion. “As dark as our show is, I really set out to make a love letter to the families of the Great Migration,” Marvin explained. “These are Black families who had scrapped and scraped through impossible distances to get to the cities in the west, east and north only to be treated with some of the same terror and hatred and ire that they were trying to escape from in the south. Getting to share that story and hopefully spark a dialogue around these issues, there’s no bigger gift than that.”

As attendees drove into the parking lot ahead of the screening, they were greeted by the Compton Cowboys, a group of ten neighborhood friends and horseback riders who have been a familiar sight on the city’s streets for the past three decades. Guests received gift bags with snacks from Black-owned businesses including Keith Kettle Corn, Just Water, Fleur el Sel and Pucker Up Lemonade Co. While DJ Hed performed a set on stage, attendees could order food delivered to their cars from Black-owned food trucks Billionaire Burger Boyz, All Flavor No Grease and Happy Ice, all of which have roots in South Los Angeles.

Al Schmitt, Maestro of Recorded Sound, Is Dead at 91