Swedish metallers IN FLAMES have released a brand-new song titled “The Great Deceiver”. The track is taken from IN FLAMES‘ upcoming fourteenth studio album, tentatively due later in the year via Nuclear Blast Records.

IN FLAMES vocalist Anders Fridén states: “‘The Great Deceiver’ was born out of frustration, basically a reaction to false flags but since then it has grown to represent several meanings. There’s a line that says ‘Bend the truth to fit your opinion’ and I feel that speaks a lot to the narrative happening online, between people, and nations etc. today. We are more a part now than ever before yet it’s easier to communicate than in any other time in history.”

In other news, IN FLAMES will embark on a fall 2022 European tour with support from AT THE GATES, IMMINENCE and ORBIT CULTURE.

The dates are as follows:

Fridén recently spoke to MoreCore.TV about IN FLAMES‘ upcoming album,. Asked if the LP’s first single, “State Of Slow Decay”, is a good representation of what fans can expect from the record, Anders said (as transcribed by BLABBERMOUTH.NET): “IN FLAMES has always been about melody and aggression. The short answer is yes, but it’s not gonna be all fast. We try to explore all corners of metal with our music. Let’s put it like this: if you’re a fan of IN FLAMES, then you will love this album.”

Elaborating on what fans can expect from the upcoming IN FLAMES album, Anders said: “This is the fourteenth album. So if you know IN FLAMES, you know sort of what you’re gonna get. But I think this is a good mix of the past, the present and wherever we’re going, and [it] has a little thing for everyone; it has the heavy, it has the melodic, it has the uptempo and the slow parts. I think it’s amazing, and it really represents who we are at this time.”

Asked if the pandemic influenced the songwriting process for the new IN FLAMES effort, Anders said: “Welll, in a certain way. Lyrically, for sure. I thought this two-year break would make us see us who we are as people and maybe come out on the other side being a little bit more nice and gentle and with more understanding, but I think it’s the opposite. So it definitely inspired the lyrical side.

“Of course, a break like that, it’s a pause, so when you get back into it, maybe unintentionally you have more energy across the board, [and] with the music as well,” he explained.

IN FLAMES performed “State Of Slow Decay” — which was produced by Howard Benson, mixed by Joe Rickard and mastered by Ted Jensen — live for the first time on June 10 at the Sweden Rock Festival in Sölvesborg, Sweden.

This past March, guitarist Björn Gelotte confirmed that IN FLAMES‘ upcoming album was once again recorded with Grammy-nominated producer Benson and Howard‘s longtime engineer Mike Plotnikoff.

In early July, Fridén told Chaoszine about the songwriting process for the new IN FLAMES album: “Me and Björn, we live on different sides of [Sweden] — he lives in Gothenburg; I live in Stockholm — and we only saw each other once or twice during the whole pandemic. But towards the end, when we kind of felt like it’s gonna open up for real, we started talking and then we decided to take a trip to the U.S. and just get the machine rolling again — write some stuff; just get things out of our system. So we spent some time — like, three weeks — in L.A. And then we flew home and had Christmas and so on, and then we flew back again and started recording stuff for real. But as soon as we got together, a few weeks in the writing process, it felt like it always has.”

Anders went on to say that he and Björn “had to be in the same room” in order to maximize their songwriting efforts. “We feed off each other’s energies and ideas and so on, and I don’t think we can write apart,” he explained. “I mean, we can, but it won’t be the same. So we have to get in the same room and be amongst everyone in the band… Me and Björn, we are the ones that are writing everything. The other guys are obviously partaking and bringing in their energy and their skills to the band, but when it comes to the writing, it’s not much different.”

Speaking in more detail about the contributions of IN FLAMES‘ three American members — drummer Tanner Wayne, bassist Bryce Paul and guitarist Chris Broderick — Anders said: “They are great individual musicians, so they bring in their skills and their way of playing, and it’s very unique from person to person. And that’s what they bring. And also the feeling — it’s such a good atmosphere within the band; there’s no arguments, really, and we’re just having a good time being around each other. And that helps the whole creative process. And what they’ve done… I mean, you will hear it whenever we… We released one new song, but more to come. You can hear it, what they do. They’re amazing guys and amazing musicians and really good friends.”

Wayne joined IN FLAMES following the departure of Joe Rickard, who played on “I, The Mask” and 2016’s “Battles”.

Tanner made his live debut with IN FLAMES in July 2018 in Brno, Czech Republic.

Longtime IN FLAMES drummer Daniel Svensson announced in 2015 that he was leaving the band to focus on his family life.

Paul has been playing most of the shows with IN FLAMES since longtime bassist Peter Iwers‘s November 2016 exit.

As previously reported, IN FLAMES will embark on a North American tour this September. Support on the trek will come from FIT FOR AN AUTOPSY, ORBIT CULTURE and VENDED.

In August 2020, IN FLAMES released a special 20th-anniversary edition of its seminal, critically acclaimed album “Clayman”. “Clayman 20th Anniversary Edition” came entirely remastered by Ted Jensen (PANTERA, DEFTONES, GOJIRA) and featured all-new artwork in a 16-page booklet, a brand-new instrumental medley plus four re-recorded versions of fan favorites such as “Only For The Weak” and “Pinball Map”. 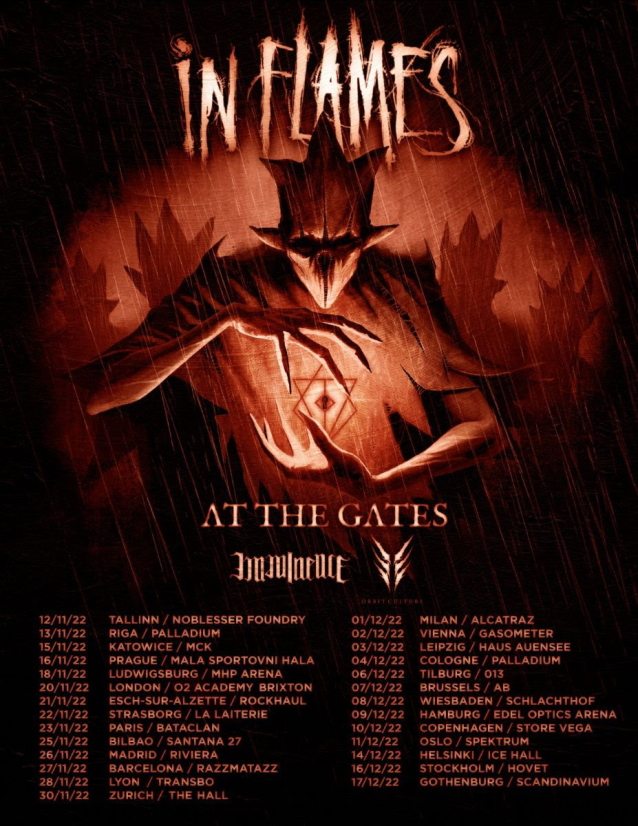 Brett Chapman is today’s Team Rizz member of the day! – 105.7 The Point

5 Albums I Can’t Live Without: Wildchild of Lootpack