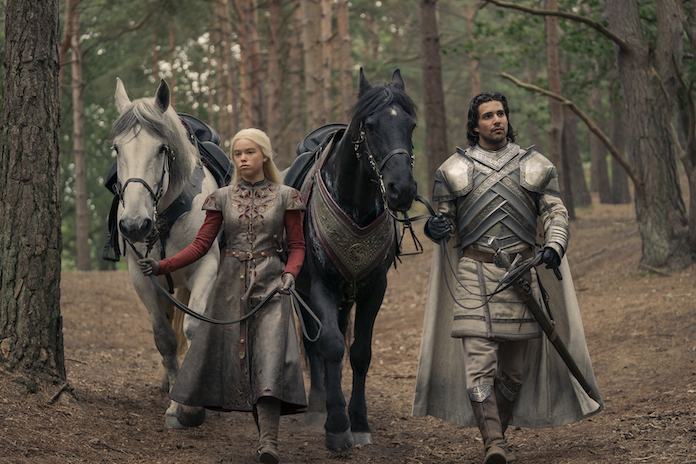 House of the Dragon Season 1, Episode 3 (“Second of His Name”)

Craghas Drahar only appears in approximately two lines of George R.R. Martin’s Fire & Blood, upon which House of the Dragon is based. He’s a Myrish prince leading the Triarchy armada in the Stepstones. He stakes his opponents to the beach to feed the crabs–hence his nickname. He is eventually cut down by Daemon Targaryen in a single combat. Craghas certainly doesn’t become a main character in the series. He’s introduced in a few ominous shots last week and by the end of the third episode, “Second of His Name,” he’s met his fate at the edge of Daemon’s blade, Dark Sister. He never even speaks a line of dialogue. Yet his character is a prime example of how even the vaguest details and most minor characters from Martin’s fictional histories can make for arresting visual images.

Played by Daniel Scott-Smith under pounds of gruesome prosthetics, the Crabfeeder appears to be suffering from greyscale, a quasi-mystical form of leprosy that is scarring in children (fan will remember Shireen Baratheon’s facial marks in the original series) and fatally degenerative in adults. Scott-Smith’s twitchy, measured physicality and the grotesque weeping scabs that make up his skin, in addition to the extremely cool mask he wears, which appears to be salvaged from the figurehead of a ship, opens the door to reading an endless amount of backstory into the character.

The first five and the final fifteen minutes of “Second of His Name” concern Daemon and Corlys’ war in the Stepstones. We are introduced to the cautious, contentious Vaemond Velaryon–Corlys’ eldest nephew in Fire & Blood, reimagined here as his younger brother. Also, the aged-up version of Corlys’ son and heir Laenor, twin to Laena whom we met last episode during her awkward “date” with the king. The war in the Stepstones has dragged on for years by the episode’s opening, with the Crabfeeder’s insurgency-style tactics bleeding Corlys and Daemon’s armies and negating the force multiplier that is Daemon’s dragon, Caraxes. These segments introduce layers to the inner workings of House Velaryon–specifically that Laenor is a dragon rider thanks to the blood of his mother Rhaenys Targaryen and his mount is Seasmoke.

Premiere: Mallbangs Share New Single “You Can Have It All”

The star of the show is once again the rogue prince Daemon. Humbled by years of defeat but still an arrogant prick, Daemon reacts to news that his royal brother Viserys is sending aid by beating the messenger half to death. This spurs Daemon to a suicide mission in which he pretends to surrender to the Crabfeeder’s forces only to attempt to cut his way through them to Craghas himself. Shot up with arrows and about to have a last stand, he’s saved by the Velaryon army and Laenor on Seasmoke. His final showdown with Craghas goes unseen. The last image of the episode is Daemon exiting a cave, covered in blood and dragging the top half of Crabfeeder’s corpse. Fire and blood, indeed.

Although the Stepstones conflict makes up barely a quarter of the episode, it’s an important step for Daemon’s character. Established in the first two episodes as a violent, showboating shit-stirrer, the events of this episode do an excellent job of humbling the character. At the same time, they show that, despite his many, many faults, he does not lack bravery or some semblance of self-awareness. Matt Smith and the writers are doing a great job of keeping Daemon a sympathetic protagonist while not sacrificing any of the qualities that make him such a rogue.

While the most viscerally exciting scenes in this episode take place in the Stepstones, the majority of the episode takes place in the Kingswood outside King’s Landing as the royal family and court celebrate the second nameday of Viserys and Alicent’s first son, Aegon. The ensemble continues to grow, beginning with our old friends the Lannisters. In the era of House of the Dragon, the Hightowers are the ambitious power behind the throne and the Velaryons are the richest house in the realm, but the Lannisters are still as proud as ever. Actor Jefferson Hall plays the Lannister twins, the brash, ingratiating Lord Jason and Tyland, his worrywart brother who has replaced Corlys Velaryon as Master of Ships on the king’s small council. Jason–played by Hall with a confident lecherousness that would make Tyrion proud–is one of many wealthy, powerful men who have been petitioning Viserys for Rhaenyra’s hand.

Rhaenyra, for her part, wants nothing to do with marriage and spends much of the episode playing hooky in the woods in the company of Ser Criston Cole. The warm, easy chemistry between Milly Alcock and Fabien Frankel certainly makes a romance between them plausible–despite the Kingsguard being sworn to a life of chastity, but it’s guaranteed that Rhaenyra will likely have no shortage of that in her future. Viserys seems to have finally cottoned to Lyonel Strong’s advice about uniting the Targaryens and Velaryons, specifically a marriage between Rhaenyra and Laenor. The long look Lyonel’s oldest son Harwin gives Rhaenyra when she rides back to the camp triumphantly covered in boars blood seems amorous to say the least.

It’s probably no coincidence that Rhaenyra ends this episode covered in blood. While her father closes the episode staring into a fire, she kills a wild boar when camping in the Kingswood with Ser Criston. No character has been more improved by this adaptation than Viserys, whom Paddy Considine imbues with a tragedy and humanism that makes you root for a good man while realizing he’s a bad king. Confessing to Alicent his prophetic dream of a son who would wear the crown of the Conqueror, Viserys nonetheless ends the episode by doubling down on his promise to Rhaenyra that she is his one and only heir. Considine genuinely makes you feel the agony of choosing between his children while knowing that either choice will cause bad feeling and bloodshed.

It’s probably worth asking yourself what any of this matters to the nameless Velaryon sailor in the opening scene whose crucifixion by the Crabfeeder is interrupted by the arrival of Daemon on Caraxes. He rejoices at his prince coming to save him, only to be crushed by Caraxes’ foot without a second glance from Daemon. The smallfolk will always suffer, no matter who sits on the Iron Throne.