Angel Olsen and Sturgill Simpson have teamed for a new duet version of the former’s song “Big Time,” which also doubles as the title track of her latest Jagjaguwar album. The track is out today (Sept. 13) ahead of Olsen’s first performance tomorrow at Nashville’s annual Americana Fest.

Olsen and Simpson have been friends since the 2016 release of Olsen’s album My Woman and have now finally collaborated with one another. “It’s crazy to write a song and then watch someone else you really admire sing your words — kinda turns the whole thing on its head,” says Olsen. “I loved the song already, but hearing Sturgill’s take on ‘Big Time’ made me smile ear to ear. He made it come alive on a different level.”

Big Time reached No. 4 on Billboard’s Top Folk Albums chart and No. 8 on its Top Alternative Albums tally. Olsen is supporting the project on a fall European tour, beginning Sept. 26-27 in Lisbon. 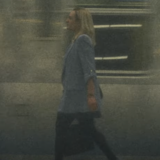 As for Simpson, he hasn’t released an album since 2021’s The Ballad of Dood and Juanita, which he said at the time would be his final project under his own name. He also canceled a fall tour last year after suffering a vocal cord hemorrhage. However, Simpson has an on-camera acting role in Martin Scorsese’s film Killers of the Flower Moon, which will be released in summer 2023 by Paramount and Apple TV+.