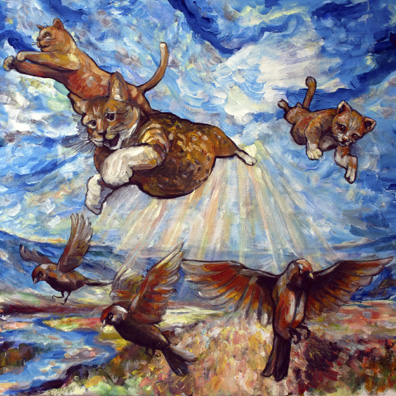 Have You Ever Seen The Jane Fonda Aerobic VHS?

If perhaps you were once a fan of Swedish band The Caesars’ 2002 single “Jerk It Out,” which was later used in Apple’s ubiquitous ad campaign for the iPod shuffle, the chances are you’ll love Finish trio Have You Ever Seen The Jane Fonda Aerobic VHS? oeuvre.

Their third studio album, Maine Coon, is a beguiling mix of garage pop imbued with The Go-Team’s propensity for manic effervescent energy. The band haven’t really tinkered with the template established on their 2015 debut album Teenage Sweetheart and 2018’s Jazzbelle 1984 / 1988 and on occasion during Maine Coon it feels not unlike being hit over the head with a melodic battering ram.

As their collective name might suggest, the band don’t really do subtle, preferring to craft a chaotic melee of in-your-face swirling organ-driven pop that throws absolutely everything into the mix. When it works, such as on the glorious opener “In Tangerine” or “Pool,” it can send your spirits skyrocketing toward the heavens. When they don’t quite hit the melodic bull’s-eye some of the tracks can come across a tad “samey.” “October,” “Serial Mama,” and “Johnny+1” (the latter certainly starts off sounding like the aforementioned “Jerk It Out”) aren’t hugely different from one another. They’re solid enough tracks in isolation but in the context of an entire album (albeit a short 30-minute one), they can blend into one homogenous organ-driven mishmash. “Zerkalo” slows the pace down slightly and does employ a little more nuance providing respite from the giddy canorous hurricane favored by Have You Ever Seen The Jane Fonda Aerobic VHS? But minor gripes aside it is an album bursting with unrestrained exuberance and quirky fun that ends on a high note with the anthemic “Troglodyte,” which is certainly one of their finest tunes to date. (

Between The Buried & Me, Khemmis, Trivium, & Whitechapel At The Wiltern On Nov....