ena mori has never been afraid to wrestle with sadness. On her self-titled 2020 debut EP, the Filipino-Japanese artist confronted her demons in colourful slices of pop experimentation, introducing herself as an expressive singer-songwriter capable of nuanced portraits of self-worth.

With ‘Don’t Blame The Wild One!’, however, mori has found a different relationship with doubt. Where her previous record sought coexistence with those negative thoughts, mori’s full-length debut is set on completely eviscerating them. Their blades sharpened by impeccable production engineered with Timothy Run of One Click Straight, these 12 tracks are crammed with anthemic hooks that swing for the stars, crystallising admissions of fragility into firework displays of jubilant affirmation. If her debut was a warm-up sprint showcasing mori’s comfort with her darkest feelings, ‘… The Wild One!’ is a victory lap that triumphs over her self-doubt in dynamite fashion.

The record’s opening track hints at that attitude: “There’s a fire in my kitchen / Up it goes / I’m to blame,” mori sings. That seeming admission of shame, soon reveals itself as a feint: as her whimsical improvisations accelerate and disintegrate into the bold, plasticky basslines of the record’s title track, she moves to take control – that kitchen fire no longer flames threatening to consume her but embers mori has stoked, ready to cook up a newfound self.

On ‘… The Wild One!’, mori searches beyond the superficial, each song a brick in a glowing road to confidence. This path isn’t an easy one: mori still catches herself troubleshooting her love life, for example, repairing broken relationships on one hand, and fighting jealousy and insecurity on others. “How can I let go of this feeling?” she asks on ‘Vivid’’s earworm chorus, conflicted about how to break the cycle – but the hook is delivered with such convincing precision that you begin to believe she already has the answer.

mori’s voice is the record’s pillar of strength. Balancing both breathy, Björk-esque expressiveness and a playful, arena-ready confidence, her charismatic delivery allows the album to stay heartbreakingly intimate even at its most exuberant – a delicate balancing act managed by the most affecting songs at pop’s vanguard, whether by Charli XCX or Christine & The Queens. None comes more assertive than ‘KING OF THE NIGHT!’, an epic blustering of courage against past insecurities. “Fragile demeanour, the righteous defeater, I am the light,” she proclaims over marching band rhythms, rising over her past shadows of self-deprecation. Even on less bombastic tunes, mori’s hooks remain equally poignant. Take the dancefloor-ready yearning of ‘FALL INLOVE!’ and its romantic chorus: “Take me to the sun while dancing in the rain / If we ever fall in love again.”

mori and Run dazzle with unstoppable topline melodies, but also unignorable is their attention to sonic detail and exhilarating juxtapositions that amplify already vibrant arrangements. On the sassy ‘TALK! TALK!’, the duo indulge in their most experimental tendencies, transitioning from luscious, lullaby-like harmonies to an unholy concoction of breakbeats and irreverent orchestral stabs. On ‘Fall INLOVE!’, mori hops between infectious synth sweeps and funky bass breaks. Other micro-details drip with personality – from dry vocal runs snuck into ‘Runaway Holiday’, to mori’s erratic, machine-gun delivery on ‘TALK! TALK!’ that mirroring her fight against disruptive inner voices.

That balance between raw vocal strength and hyper-polished production culminates in ‘A Higher Place’. There, mori has a moment of self-realisation about growing on her own terms: “Perfection isn’t cool as it seemed … The sky wasn’t meant for me.” As the song swells in a swirling tapestry of Wurlitzer keys and plucked synths, mori fittingly refuses to give in to a cheap crescendo. Instead, she reaches for a climax that’s almost spiritual – as horns and sublime harmonies enter the mix, the track halts mid-build, as if suddenly enlightened to relinquish her hesitancy for deeper strength.

From that point on, mori finds the courage to pivot outward from her inner orbit. The record’s latter half is ecstatic: house barnburner ‘Runaway Holiday’ is instantly club-ready, its 4/4 thump turbocharging bouncy basslines and filter sweeps equally at home in a Rina Sawayama concert or DJ Seinfeld set. “Who are we to say if we’re not enough?” mori asks on the equally optimistic ‘White Room’, rallying against inadequacy above blissful arpeggiators and choral vocals.

As much as mori succeeds at dispelling darkness with blinding euphoria, ‘…The Wild One’ ultimately strikes hardest when it acknowledges the pessimism and negativity. On ‘SOS’, the record’s stunning centerpiece, she lashes out at everything from the government to medication, lamenting injustice aggravated by isolation. “Give me another word to destroy my own world, that will forgive us all,” she sings, her words painfully relatable to fellow youth facing a Marcos presidency and uncertain global currents. But concealed in mori’s despondency is a secret hope for encouragement, one that bleeds into the track’s joy and its electric mix of snappy beatwork and chippy synths. Into the song’s shadows, she sneaks in her true thoughts: cries of “Walang kasalanan” – “innocent”.

Eventually, mori takes a stand, closing the curtain on nihilism and apathy. “Youth make our beautiful future / youth ang lilikha suteki na furusato,” her digitised voice echoes in its grooving coda. By recasting her battle cry through the languages of her mixed heritage, mori gloriously reclaims an identity that she was bullied for, turning her vulnerability into a celebration of strength. Having let go of blame and shame for being herself, on her debut album mori uses her weakness to empower others. On ‘White Room’, she declares: “Let the broken part heal into perfect sound.” It’s a clarion call for those just a little different, for those still daring to try – for those once like her, still seeking to break free. 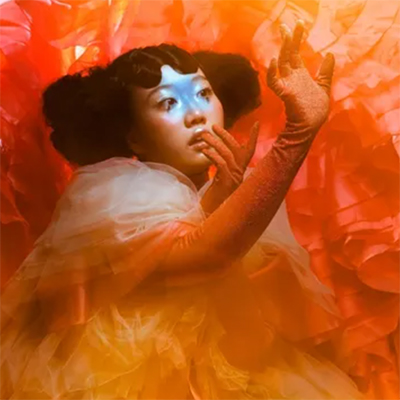 NCT 127’s Taeil Experiences An Unexpected Mishap During The Concert In Manila, And His Members Can’t Help Laughing

A delight with or without the Bottle Blondes / Coffeeshop Conversations @ Artichoke Music...