Legendary rock band FOREIGNER has announced that it will donate and raise funds for families devastated by Hurricane Ian in Florida. These relief efforts will take place during FOREIGNER‘s sold-out “The Greatest Hits” November 2022 tour run across Florida.

FOREIGNER will partner with “Greater Good Music” to provide truckloads of groceries for families and “Charity Pros For Kiddos” Christmas toy drive efforts. These essentials will help Florida residents in devastated areas through the Thanksgiving and Christmas periods.

FOREIGNER will donate and auction off several hand-signed guitars and invite audience members to join the band in these efforts.

“The Greatest Hits” is a celebration of FOREIGNER‘s biggest-selling albums and most iconic hits. The audience will be treated to songs such as “Cold As Ice”, “Feels Like The First Time”, “Hot Blooded” and “I Want To Know What Love Is”.

Earlier this week, FOREIGNER announced its farewell tour. The trek is set to launch on July 6, 2023, at Atlanta’s Ameris Bank Amphitheatre, the area’s largest outdoor venue. For the first leg of the U.S. Live Nation-produced tour, FOREIGNER will be joined by LOVERBOY, one of the 1980s biggest hit makers. The spectacular show will thrill audiences with stellar performances of more than 20 combined chart-topping songs. Tickets go on sale on November 18, 2022 at LiveNation.com.

Watch: Han Ji Hyun And Bae In Hyuk Try To Stay Serious For Their Awkward Embrace In “Cheer Up”

FOREIGNER leader and founder Mick Jones said: continues to elevate FOREIGNER‘s influence and guide the band to new horizons with his stylistic songwriting, indelible guitar hooks and multi-layered talents while singer Kelly Hansen, one of rock’s greatest showmen, has led FOREIGNER into the digital age inspiring a whole new generation of fans. Bassist Jeff Pilson, Michael Bluestein on keyboards, guitarist Bruce Watson, Chris Frazier on drums and guitarist Luis Maldonado provide an unprecedented level of energy that has resulted in the re-emergence of the astounding music that speaks to FOREIGNER‘s enduring popularity. FOREIGNER has an extraordinary streaming and radio audience.

With more Top 10 hits than JOURNEY and ten multi-platinum albums, FOREIGNER is universally hailed as one of the most popular rock acts in the world with a formidable musical arsenal that continues to propel sold-out tours and album sales, now exceeding 80 million. Responsible for some of rock and roll’s most enduring anthems, including “Juke Box Hero”, “Cold As Ice”, “Hot Blooded”, “Waiting For A Girl Like You”, “Feels Like The First Time”, “Urgent”, “Head Games”, “Say You Will”, “Dirty White Boy”, “Long, Long Way From Home” and the worldwide No. 1 hit “I Want To Know What Love Is”, FOREIGNER still rocks the charts more than 40 years into the game with massive airplay and continued Billboard Top 200 album success. Streams of FOREIGNER‘s hits are approaching 15 million per week.

The only remaining original member of FOREIGNER, Jones suffered from some health issues beginning in 2011, eventually resulting in heart surgery in 2012. Ever since, it is never announced whether he will be appearing with the band for specific shows — it just depends how he is feeling.

After original singer Lou Gramm left FOREIGNER in 2003, Jones took some time off before regrouping a couple years later with an entirely new lineup, featuring Hansen and Pilson, among others.

Gramm was the voice on FOREIGNER‘s biggest hits, including “Feels Like The First Time” and “Cold As Ice” from the band’s eponymous debut in 1977, and later songs like “Hot Blooded” and “I Want To Know What Love Is”. 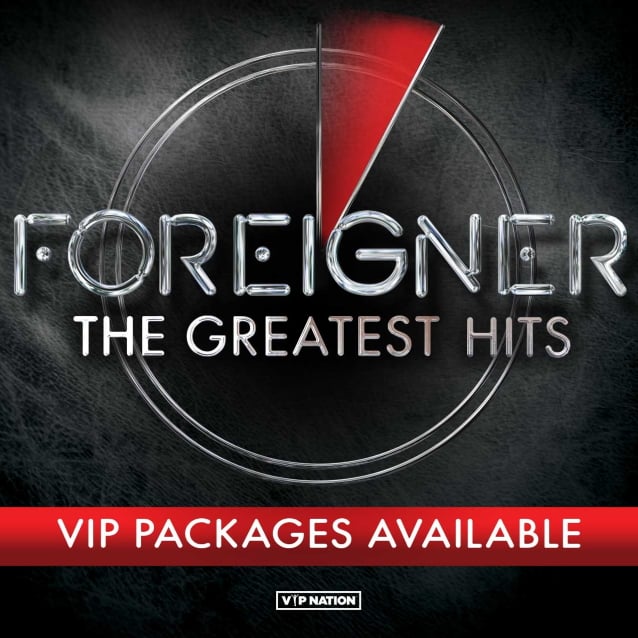