The storied history of Abbey Road Studios is the focus of a new Disney+ documentary. On Monday, Rolling Stone premiered the trailer for If These Walls Could Sing, featuring interviews with some of music’s greatest artists, including Elton John, Ringo Starr, and Paul McCartney, about the impact of the recording studio.

“When you enter a place with so much history around it, it’s kind of sacred in a way,” John says to open the trailer. “People want to come here. They want the sound of Abbey Road.”

The trailer follows the film’s director Mary McCartney — daughter of Paul McCartney — as she describes how the beloved studio has been a part of her life for “as long as I can remember.”

“Hearing it was the anniversary of Abbey Road Studios brought back so many memories to me,” Mary tells Rolling Stone, referring to the record studio’s 91-year history. “I have grown up visiting Abbey Road, it feels like family to me. In directing this feature-length documentary, it felt natural to explore the wealth of stories, and unearth so many unheard gems that I had not known about.”

The trailer splices clips from the Beatles’ recording days and includes a recent interview with Paul himself. “We had used a particular,” McCartney says before turning and seeing an old piano. “There it is!” 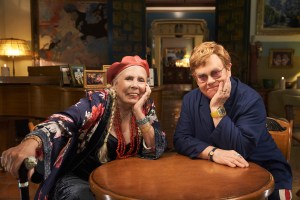 The Beatles legend then sits down to play the piano, as the trailer shows interviews about how the studio pushed for creative advances in music — and how George Lukas’ Star Wars helped revive the studio after a yearslong funk.

“The smell of Abbey Road is the smell of fear,” John says in the clip. “‘Am I going to mess this up?’”

Among the new stories told in the film are that of Eg Fela Kuti, who came from Nigeria to record a trio of albums, and Kate Bush, who produced and directed a video in one of Abbey Road’s studios.

“It has been such an exciting journey bringing these stories and many more to life,” Mary adds.

The new film — scheduled to premiere on Disney+ on Dec. 16 — is also set to feature interviews with Roger Waters, Liam Gallagher, John Williams, Celeste, and Sheku Kanneh-Mason, among others.