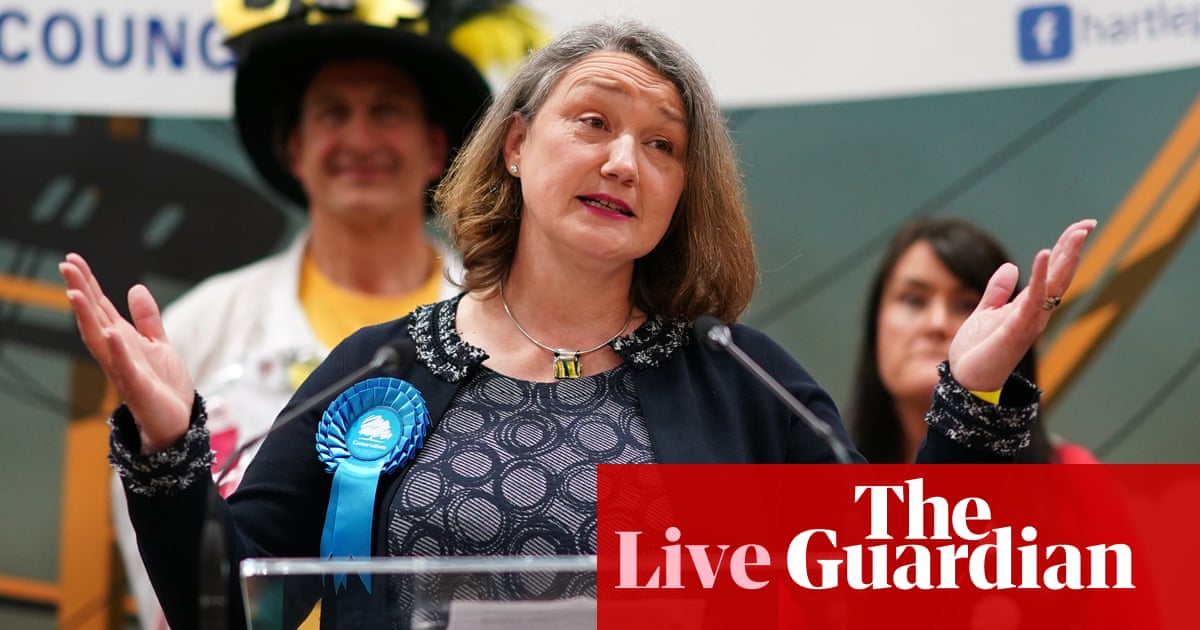 This is from Matt Singh, an elections specialist.

In an interview with BBC News John McDonnell, the former shadow chancellor, said some of the policies advocated by Labour at the last election, like moving Treasury civil servants out of London and investing in infrastructure, were being implemented by the Tories. He said he developed these ideas from visits to places like Hartlepool, although he also said he thought the Conservatives were not fully committed to this agenda.

He said Labour now needed policies that were even more radical.

Now we need to be more radical than we were in December 2019 because the problems that people face are so much more severe.

Asked if Sir Keir Starmer should respond to the defeat with a shadow cabinet reshuffle, McDonnell said that would be a mistake. He said:

McDonnell said that when Starmer was elected Labour leader he said he would build upon the 2017 and 2019 manifesto promises [a reference to this statement from Stamer]. “He should fulfil that promise on which he was elected,” McDonnell said.

McDonnell also said that Starmer should follow the example of Harold Wilson and have a shadow cabinet incorporating the left, the right and the centre. “They were rumbustious, but as a result of that debate we got better policy decisions,” McDonnell said.

Here is my colleague Marina Hyde on the Hartlepool result. It won’t make for happy reading in Labour HQ. Here is an extract.

Increasingly, Labour’s stated mission to rekindle its lost heartlands feels a bit maudlin and entitled. It’s got the flavour of one of those stories where a man sets up a piano beneath his ex-girlfriend’s window and vows to play it until she gets back with him. Journalists who don’t really get it cover the story with headlines like “The last romantic”. All normal women who read it are just thinking: I know exactly what kind of guy he is. I hope she and her new boyfriend will eventually be able to relax in witness protection.

And here is Marina’s article in full.

After humiliation in Hartlepool, where now for smalltown detective DI Starmer? | Marina Hyde

And Dominic Cummings, the Vote Leave campaign director and Boris Johnson’s chief adviser in No 10 until he resigned near the end of last year, says the Hartlepool result shows that his realignment strategy has been vindicated.

Cummings is probably right about the “centre ground” being, if not a fiction, a concept that is misunderstood (see this by ConservativeHome’s Paul Goodman for a good take), but most of the best Brexit “pundits” would have agreed with him. The case against Vote Leave from the remain punditocracy was not that Cummings’ strategy would not work, but that it was based on claims about Brexit that were unfounded.

This is from Ben Wallace, the defence secretary.

Speaking to reporters after her election victory, Jill Mortimer, the new Conservative MP for Hartlepool, said:

I’m just overwhelmed by the support of the people of Hartlepool. It confirms what I heard on the doorstep – they just want positive change, and that’s what we’re going to bring them.

This town needs to be regenerated, it has been in decline for a long time. There is so much to do. I’ve got a great big long list and I’ll be on it.

Mortimer also confirmed that she would now be looking for a home in the constituency. “I will be going to the estate agents, probably this weekend if I get a minute,” she said.

Nicola Sturgeon is heading for a significant victory in the Holyrood elections but could well end up one seat short of an overall majority, the elections expert Prof Sir John Curtice has said.

Curtice told BBC Radio Scotland that, based on the last five opinion polls, the Scottish National party could win 64 of the Scottish parliament’s 129 seats. The intervention by Alex Salmond and his nationalist Alba party had likely cost the SNP some vital list seats, he said, cutting their chances of an overall majority to around 50/50.

Although Alba has been polling at around 3% on the lists, making it unlikely they will win seats, it still shaved off SNP support. The Scottish Greens meanwhile are on course for a record number of seats, reaching 10% in regional list seat polling. That implies there will be a widely-forecast majority of pro-independence MSPs, once all the results are out later on Saturday.

As polling closed on Thursday night, sources in the SNP, Labour and the Tories reported record turnout but added that it was also patchy in some places. Many observers expect significant levels of anti-independence tactical voting in Labour, Tory and Lib Dem marginals.

If you take the five opinion polls that were conducted in the last week or so of the campaign, they suggest that on average the SNP are running at 49% on the constituency vote, although much lower – about 38% – on the list.

The Conservatives are narrowly ahead of Labour – about 22% Conservatives to 21% for Labour on the constituency vote – but the Conservatives enjoy a comfortable four-point lead on the list vote and that’s going to be the crucial one so far as seats are concerned.

If you take all of those numbers and you do the dangerous game of trying to predict what the outcome might be, you get to 64 SNP seats – which really means there is a 50% chance the SNP will get an overall majority, but equally a 50% chance that they might fail.

Indeed, it’s probably all going to turn on the outcome in nine really marginal, opposition held seats – some held by Conservative, some held by Labour – but all with majorities of less than five points.

If the national polls are roughly right, it is a question of how many of those seats the SNP manage to pick up and that’s one of the things you really cannot tell from national polls, whether that’s going to happen or not.

An official counting ballot papers at a counting centre in Glasgow this morning. Photograph: Russell Cheyne/Reuters

In an interview on the Today programme Lord Mandelson, a former Labour MP for Hartlepool and a key architect of New Labour, said that he was “gutted” to see the Conservatives win the seat. He also argued that the party had been on a losing streak every since the Tony Blair era. He told the programme:

I also feel, I have to say, a mild fury, that the last 10 years of what we have been doing in the Labour party nationally and locally has brought us to this result, because that is above all fundamentally an explanation of what’s happened today …

What I would say is this, and remind the party we have not won a general election in 16 years.

We need for once in this party to learn the lessons of those victories as well as those defeats, and I hope very much that when Keir and his colleagues in the shadow cabinet say this means that we have got to change direction that they actually mean it.

Mandelson also said that he had spent a lot of time in Hartlepool during the byelection campaign, he said the defeat was explained by two Cs, Covid and [Jeremy] Corbyn, with Brexit, and promises of government spending, also factors. Corbyn was “still casting a very dark cloud” over Labour, Mandelson claimed. He said:

Believe it or not, not on one door that I knocked did a single voter mention Brexit to me.

The one thing they did raise with me however is Jeremy Corbyn – he is still casting a very dark cloud over Labour. Labour voters are not letting this off lightly, he still gets them going on the doorstep.

That is what the Labour Party has got to do.

The full results from Dudley are now in. The Conservatives have gained the council, from no overall control previously. They gained 12 council seats, and Labour lost 12.

This is from Jonathan Walker from the Birmingham Post and Mail.

In an interview earlier this week Starmer claimed that he did want to be like Biden in offering bold, transformational policies, although the examples he cited were very generalised and devoid of specifics.

Keir’s got to be given his chance and I’ve said that all the way along. I’m not going to be one of those people treating [him] the way they treated Jeremy – always challenging him, coups and all the rest.

Keir now needs to sit down and think through what happened in this campaign, and what I’ve been saying to him is you need to demonstrate to people the sort of society you want to create, the policy programme that will achieve that society, and you need to get back to that real grassroots campaign.

We must never again send our candidates into an election campaign almost naked, without a policy programme, without a clear view on what sort of society you want to create. That’s the sort of thing that we need now.