DISTURBED singer David Draiman says that he “couldn’t be more proud” of his bandmate Dan Donegan for taking on “cancel culture” with his new guitar.

Earlier today (Wednesday, July 6), Donegan, who frequently shares posts on his personal Facebook page that amplify Republican talking points and that are derogatory to Democrats, posted a couple of pictures of his new guitar from Schecter Guitars, featuring the words “Fuck Cancel Culture” incorporated into a design that replicates the iconic typography of the Coca-Cola logo.

A short time later, Draiman took to his Twitter to share a picture of the guitar, and he wrote in an accompanying message: “@DanDoneganGtr ‘s new guitar. I couldn’t be more proud @Disturbed”.

Cancel culture is the idea that someone, usually a celebrity or a public figure, whose ideas or comments are considered offensive should be boycotted. These people are ostracized and shunned by former friends, followers and supporters alike, leading to declines in any careers and fanbase the individual may have at any given time.

While “cancel culture” may be a recent phenomenon, public scapegoating, shaming and silencing tactics are not. Republicans have for a long time used the phrase “cancel culture” to criticize the left, even though there’s a long list of supposedly left-leaning associates who have been targeted or boycotted by conservatives, including Colin Kaepernick, Disney, Nike, Campbell’s Soup, THE DIXIE CHICKS and Kathy Griffin.

Draiman and Donegan are not the first rock musicians to speak out against cancel culture. Last month, KISS frontman Paul Stanley tweeted: “I find myself thinking ‘Cancel Culture’ is more dangerous than what it wants to cancel. Is censorship and silencing people okay if you believe you’re right?? That is a slope we’re already slipping down. You defeat lies with truth, not gags.”

Stanley and his KISS bandmate Gene Simmons previously spoke out against cancel culture while answering questions from fans at a KISS VIP exclusive soundcheck event in September 2021 in Austin, Texas. At the time, they defended actress Gina Carano after she was ousted from “The Mandalorian” over controversial social media posts.

Carano — a former MMA fighter who played Cara Dune in the hit Disney+ show — was dropped in February 2021 over a post that likened being a conservative in modern America to being a Jew in Nazi Germany.

Simmons and Stanley, who are both Jewish, were asked if they were fans of the breakout series. Gene called “The Mandalorian” “one of the best shows on TV” and said in reference to Carano: “They should have kept the chick, even though she had different political [views]. It’s not about politics; it’s about whether you’re a good actress.”

A couple of minutes later, Paul also weighed in on the topic, saying: “Look, political views… This whole cancel culture is so dangerous. The idea that people can’t speak their mind. That’s what freedom is all about. And to lose your job because you’ve got something to say — even if I find it offensive — that’s… we’ve gotta look at that. Plus she can kick my ass.”

In April 2021, TWISTED SISTER singer Dee Snider, who was famously called to testify before the U.S. Senate against the proposition to have warning labels be placed on albums deemed “offensive” to listeners, said that “censorship has changed quite a bit” over the last few decades. “Now censorship still exists, but it’s gone from the right more to the left,” he told NewsNation‘s “Banfield”. “We’re in this P.C. world where we have to be careful about what we say and who we offend, and it’s a very odd thing.”

That same month, Snider‘s TWISTED SISTER bandmate Jay Jay French addressed the fact that the current trend of canceling people and companies has gotten out of hand during an interview with Rocking With Jam Man. Speaking about the fact that Marilyn Manson was accused by several women of abuse and assault, including “Westworld” actress Evan Rachel Wood, who claimed in a social media post that Manson “groomed” and “horrifically” abused her for years, the guitarist said: “Michael Jackson got accused of some pretty bad stuff, but Michael Jackson music is still being played. So, obviously, somebody decided that that was okay; someone decided that’s not gonna bother people. And yet other people’s music has been taken off. [Former pop star] Gary Glitter played in all the arenas around the country — baseball stadiums, football stadiums, everything. But then Gary Glitter got arrested for some weird stuff he did in Thailand with underage children and got banned everywhere. When I say ‘banned,’ I just mean the people said, ‘We’re not gonna play his music anywhere,’ so they don’t play his music. And I am in no way endorsing in any manner, way, shape or form his actions. What I’m saying is that that is a byproduct of what happens in life in general. And it’s terrible.”

He continued: “Cancel culture is not a healthy thing. Cancel culture is not healthy, because it just depends on who decides to do the canceling. So if they like TWISTED SISTER, we don’t get canceled, we are okay, but if they hate TWISTED SISTER and they cancel us, it’s not okay, so therefore it’s not okay just to do it randomly. It’s a personal choice. If you don’t wanna buy something by somebody, don’t buy it, but for the media to withhold it is opening up a can of worms that is almost impossible to put back in the jar.”

Dee previously spoke about political correctness in 2020 when he told Canada’s The Metal Voice that a movie like “Blazing Saddles”, the 1974 American satirical Western black comedy film directed by Mel Brooks “could not be made today — it literally could not be made, because it would offend too many people.” 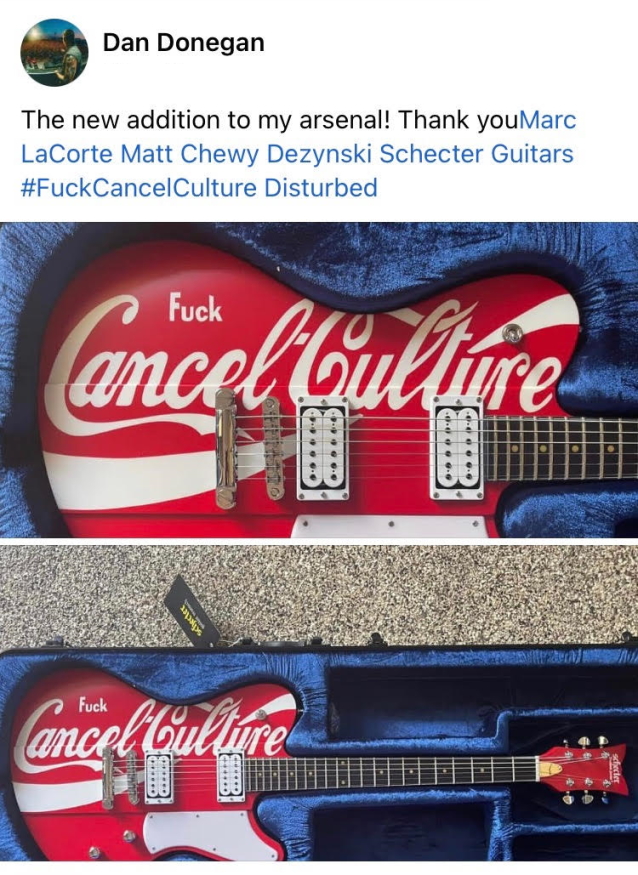