On Derrel McDavid’s third day on the stand on Friday, he faced cross examination from the government as the trial rounded out its fourth week. The CPA-turned-business-manager McDavid has insisted he wholly believed the disgraced singer’s claims that he never engaged in sexual acts with minors while they worked together from the early Nineties until 2014 throughout his testimony.

Throughout McDavid’s testimony on Wednesday and Thursday, he continued to assert that the prosecution’s witnesses were extortionists and liars. Lisa Van Allen, a key government witness, had testified she had taken a video depicting her, Kelly and his underage goddaughter and star prosecution witness “Jane” from Kelly’s collection. Known as Video 4 in the indictment, it has not been presented during the trial. The prosecution claims it is part of Kelly’s successful coverup of events, while the defense maintains Jane was never in the video at all. 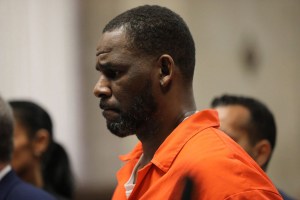 McDavid backed the latter claim, painting Van Allen and prosecution witness Keith Murrell as people in Kelly’s orbit looking for a payday, as counsel reiterated happens when dealing with a superstar. McDavid said that they secured the missing tape from Van Allen and Murrell following him paying each of them, and that the tape featured Van Allen, Kelly, and Kelly’s wife. It’s a claim both McDavid and Kelly’s legal teams have made at different points through the trial.

On Friday, Assistant U.S. Attorney Jeannice Appenteng worked to establish that McDavid was instead a major player in a scheme to pay off Kelly’s alleged victims and that his claims of ignorance were unfounded after more than 20 years working closely with the singer. Appenteng pointed out that the four men who McDavid hired to protect the star from those he alleged were out for “money grabs” are all dead — lawyers Ed Genson, Gerald Margolis and lawyer-turned-private investigator Jack Palladino, alongside Jane’s dad.

“You’re the only one left to describe what was said” at that time, Appenteng asked. McDavid responded: “No.” McDavid’s lawyer on redirect pointed out that one of the lawyers around at that time, John Touhy, is still alive. However, attorney-client privilege would likely prevent him from testifying.

The prosecution also noted that McDavid had financial motivations to want to keep any alleged sexual improprieties Kelly was allegedly involved in under wraps. McDavid earned 10 percent commissions during the height of Kelly’s fame, which totaled into the millions of dollars during that time period.

The current charges against McDavid hinge on his involvement as the artist faced state child pornography charges related to the 2008 trial in which Kelly was acquitted (Jurors have since said Jane’s refusal to testify in 2008 — the alleged 14-year-old girl depicted in a videotape central to that case and the current one — contributed to the acquittal. Jane has since identified herself on the tapes in the current trial, clips of which were shown in court to the jury).

The news came days before Kelly was set to perform at the Salt Lake City Winter Olympics, a fact McDavid claimed was not a coincidence. He further claimed Hankerson’s hatred for Kelly was a motivation. McDavid believed the tapes were fake at that time and had noted through his testimony that Jane and her parents had repeatedly denied she was involved with Kelly and denied it was her on video until the current trial.

But McDavid changed his tune as he rounded out his second day of testimony on Thursday. When asked where he stood with his belief from 2008 when he backed his former boss being exonerated to what has been presented as the current trial unfolded, McDavid said he had learned a lot over the last three weeks. “As I stand here today, I’m embarrassed, sad.” His assertion faced objections from both Kelly’s lawyer Bonjean as well as the prosecution.

Still, on Friday, McDavid was adamant that he was unaware of Kelly’s alleged sexual encounters with underage girls over the more than two decades they worked together. When Appenteng mentioned that Tracy and Nia, both of whom lodged lawsuits against Kelly for underage sex accusations that were settled and paid out by McDavid on behalf of Kelly in 2002, he said he didn’t recall the specifics of either suit, even though Nia’s suit named him as a defendant.

The trial is expected to resume with closing arguments on Monday, with jury deliberations to follow.

Between The Buried & Me, Khemmis, Trivium, & Whitechapel At The Wiltern On Nov. 10