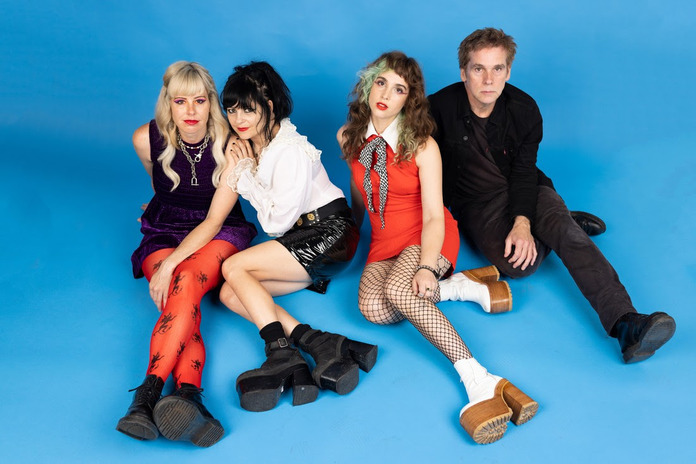 Islands in the Sky Due Out February 24, 2023 via Suicide Squeeze

LA goth-rock band Death Valley Girls have announced the release of a new album, Islands in the Sky, which will be out on February 24, 2023 via Suicide Squeeze. They have also shared a video for a new album single, “What Are the Odds.” View the Samantha Westervelt-directed video below, along with the album’s tracklist and cover art.

In a press release, the band’s Bonnie Bloomgarden states: “When we wrote ‘I’m a Man Too’ we were trying to revisit No Doubt’s ‘I’m Just a Girl’ but through a new lens. ‘What Are the Odds’ is in the same way an investigation /revisitation of Madonna’s ‘Material Girl’ but with a DVG spin. We love to think about consciousness, and existence, and we very much believe in some type of reincarnation, but also that this experience isn’t linear, there isn’t a past and future, there’s something else going on! What is it? Is it a simulation, are we simulated girls??!”

Bloomgarden also elaborates on the album, which was initially conceived while she was bed-ridden with a mysterious illness from November 2020 to March 2021: “When I was sick, I started to wonder if it would be possible to write a record with messages of love to my future self. This was really the first time that I consciously thought about my own suffering and what future me might need to hear to heal. I struggled so much in my life with mental health, abuse, PTSD, and feeling like I didn’t belong anywhere. And I don’t want anyone—including my future self—to suffer ever again. I realized that if we are all part of one cosmic consciousness, as we [Death Valley Girls] believe, then Islands in the Sky could serve not only as a message of love and acceptance to myself, but also from every self to every self, because we are all one!”

Islands in the Sky Tracklist: