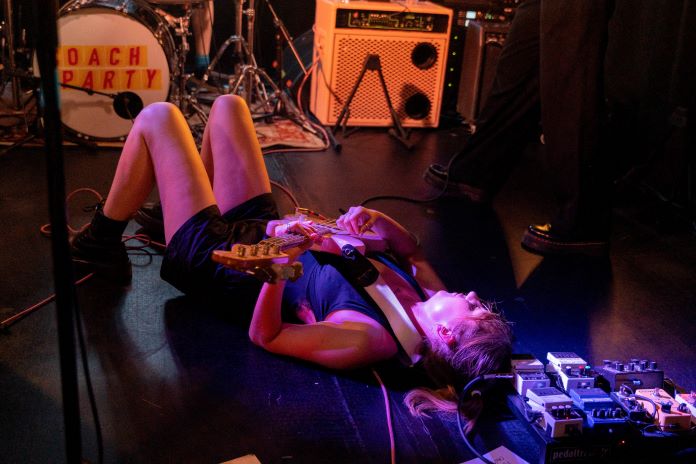 Midway through Coach Party’s show at the Boileroom, singer and bassist Jess Eastwood recalls how someone once unforgivingly lambasted her musical ability. Well, this isn’t Guitarist magazine and we don’t care how fast anyone can play a pentatonic scale or invert a minor chord.

Who Do You Think Is NMIXX’ FOTG?

Neither do the teenage girls pressed against the barrier who sing along with every chorus at the Guildford leg of the band’s current UK tour. That’s because Coach Party are a band for them. They’re a band that hits you with brattish energy and tales of rocky relationships that will connect with anyone who’s young, has been young or just wishes they were young again. Frankly, who needs a grade 8 when you’ve got tunes like these in your locker?

There’s clearly something in the water down in the Isle of Wight. Wet Leg might be the flagbearers who crossed the Solent and seized the summer, but Coach Party have joined them, albeit on a slightly smaller scale. For now, at least.

“Weird Me Out” and “3 Kisses” shows why they could easily be next year’s soundtrack to the slosh of plastic pint pots on scored turf under sunny skies.

Until then, the melodies played by guitarists Joe Perry and Steph Norris spark singalongs of their own during “Everybody Hates Me” and “Shit TV”.

Maybe it’s the novelty of being just three dates into the tour, but there’s a definite sense that Coach Party are a band of mates just having great fun. Their rabble-rousing grunge-pop is just an added bonus that helps make the connection between them and an audience hungry to hear more.

The anti-misogynistic message behind “FLAG (Feel Like A Girl)” should be a given, but it feels especially timely right now and is performed like a call to arms, before “Can’t Talk, Won’t” winds things up with Eastwood rolling around on the floor, Norris screaming into her microphone and drummer Guy Page scattering his kit across the stage on hitting his final beat of the evening.

Nintendo won’t be increasing price of Switch, despite rising costs

K-Pop Fans Share Weird Sounds They Discovered In The Background Of 11 Songs, And...