China Is Trying to Build an Atlantic Naval Base

The People’s Liberation Army Navy could soon be operating in the Atlantic Ocean, according to the U.S. Army general in charge of Africa Command.

➡ Join Pop Mech Pro to get exclusive answers to your most pressing military questions.

China has reportedly approached several African countries for the right to open a naval base. The result could be Chinese surface ships and submarines thousands of miles from their traditional operating areas, which could prove to be problematic for U.S. forces in wartime.

Gen. Stephen Townsend, the top U.S. general for Africa, told the Associated Press on May 6 that China is “looking for a place where they can rearm and repair warships.” He continued:

“That becomes militarily useful in conflict. They’re a long way toward establishing that in Djibouti. Now they’re casting their gaze to the Atlantic coast and wanting to get such a base there.” 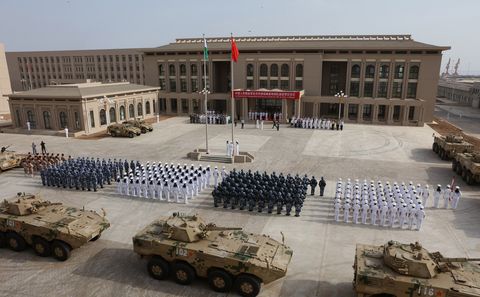 Chinese Marines at the opening of the country’s military base in Djibouti, 2017.

China has reportedly approached countries on Africa’s west coast, from southern Namibia to Mauritius, but hasn’t reached an agreement with any country yet. So far, China has just one overseas base: Djibouti, on the Horn of Africa.

China is slowly, but surely expanding the reach of its naval forces. In the late 2000s, China volunteered to join the international anti-piracy flotilla off the coast of Somalia, a process that forced its navy to learn how to sail from mainland China across southeast Asia and the Indian Ocean, and then conduct roving anti-piracy patrols. This was a huge leap in capability for a navy that had rarely sortied outside of the western Pacific.

The patrols led to China securing the rights to a local naval base, in Djibouti, which is now the home of several hundred Chinese marines—and has spawned reports of Chinese troops harassing U.S. military aircraft with laser beams.

Townsend claims China has tried to sign an agreement to establish a naval base in Tanzania, farther south, and now around the Cape of Good Hope in the Atlantic. If more Chinese bases materialize in Africa, the result could be a string of facilities leading close to the American-dominated Mid-Atlantic region.

This all makes sense from the perspective of a major naval power whose economy relies on international trade. Most of China’s imports and exports travel by sea, and China has a stake in maintaining the freedom of the seas. 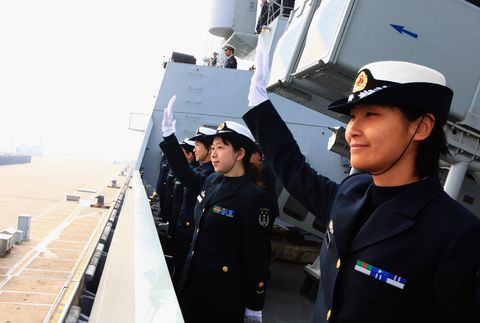 Chinese sailors aboard a guided missile frigate wave goodbye as the eighth anti-piracy patrol to leave for the coast of Somalia prepares to depart, 2011. The PLAN used the anti-piracy patrols to hone its ability to sail to and patrol distant waters.

At the same time, such bases would also be useful in a potential conflict with the U.S. If a war broke out tomorrow, U.S. forces could be reasonably sure of bottling up the vast majority of the Chinese Navy in the west Pacific Ocean, where they could be isolated, sunk, or forced to return to port.

But if Chinese air, naval, and marine forces were based in the Atlantic, they could force the Pentagon to expand the scope of a war with China far beyond the Pacific. The U.S. could be faced with a two-front war, tracking down Chinese aircraft carriers, surface task forces, and attack submarines operating in the Atlantic.

China, for all of its newfound prosperity and the rapid growth of its navy, has few places to send its fleet worldwide. Unlike the U.S. Navy, which can count on a global network of military allies with welcoming ports, the People’s Liberation Army Navy might sail to Russia, Pakistan, Djibouti … and that’s about it.