Before it kicks off next Wednesday (July 6), organisers of the Mad Cool festival have revealed the full slate of stage times for this year’s edition.

Seasick Steve and Alec Benjamin will go head-to-head as the first acts to perform, both taking to their stages – the titular Mad Cool mainstage and Vibra Mahou stage, respectively – at 5:50pm on Wednesday. Metallica have the longest set of the night – and evidently, the entire festival – with a two-hour set running from 9:30pm to 11:30pm on the Mad Cool stage.

Closing out the night will be Twenty One Pilots and Chvrches, however the latter will perform a slightly shorter set: Twenty One Pilots are set to go out at 11:35pm on the Madrid Is Life mainstage, while Chvrches’ set starts at midnight on the Region Of Madrid stage. Both wrap up at 1am.

The next three nights will all run for an extra two hours, kicking off a little after 6pm and wrapping up at 3am. The line-up for the Mad Cool stage will sport Tom Misch, Deftones and The Killers on Thursday (July 7), while the adjacent Madrid Is Life stage will host Mother Mother, Amyl And The Sniffers, Imagine Dragons and Foals.

Come Friday (July 8), the Mad Cool stage will see Black Pumas, The War On Drugs and Muse strut their stuff. Alt-J will close out the Madrid Is Life stage, following sets from Incubus, Haim and CL. On Saturday (July 9), those spots will be filled by Local Natives, Leon Bridges, Kings Of Leon and Royal Blood, while fans camped out at the Mad Cool stage will see Guitarricadelafuente, Pixies and Florence + The Machine.

Sunday (July 10) offers a reduced itinerary, with no programming on the Seven stage and a cut-off time of 12:30am. Jack White will close out the Madrid Is Life stage, following sets from Nathy Peluso and Princess Nokia, while Peach Tree Rascals, Sam Fender and Natos Y Waor will play on the Mad Cool stage. Duelling it out against White as the last acts to play will be La M.O.D.A. (on The Loop stage) and Recycled J (on the Amazon Music stage).

Take a look at all of the stage times for Mad Cool 2022 below: 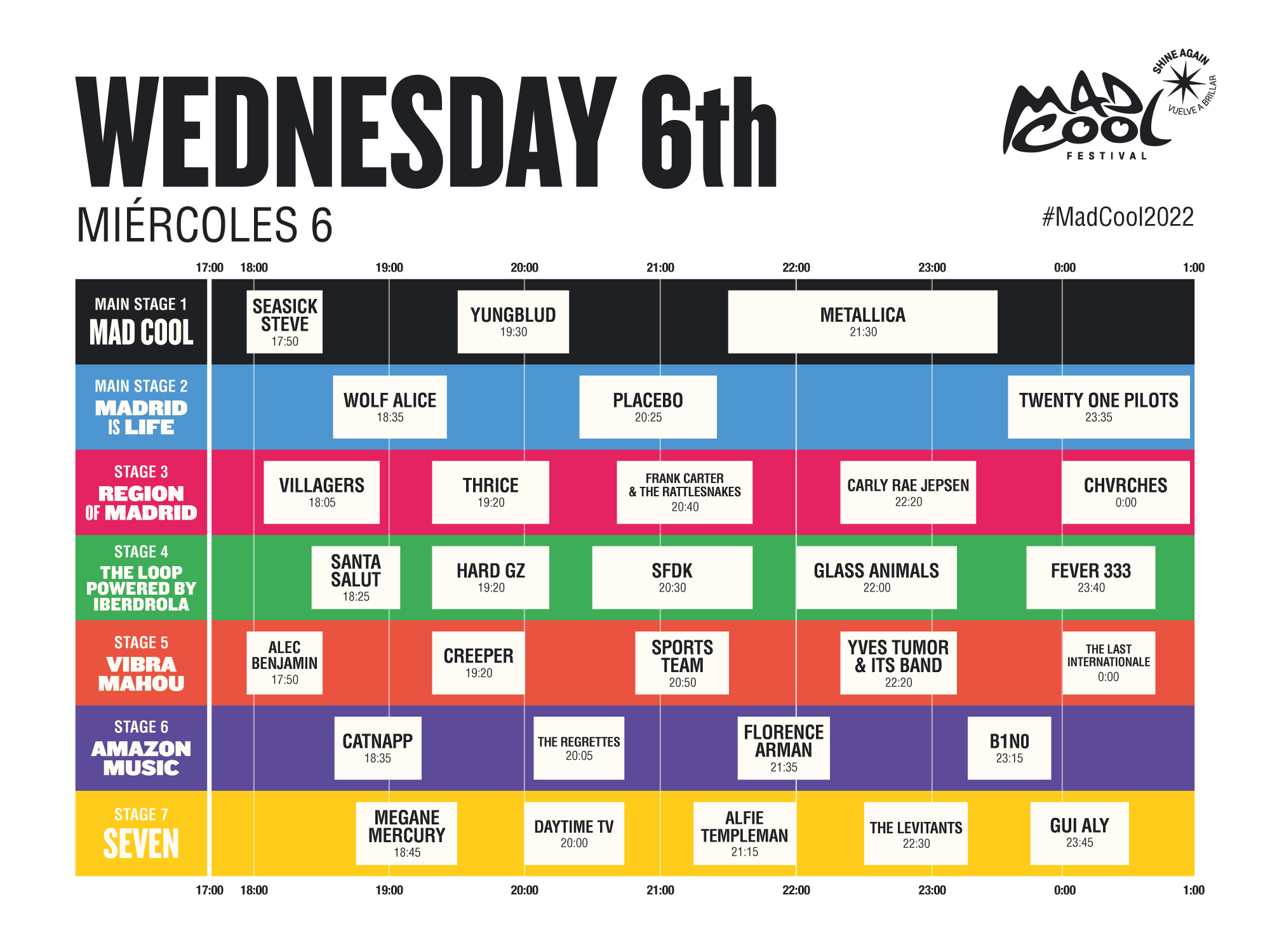 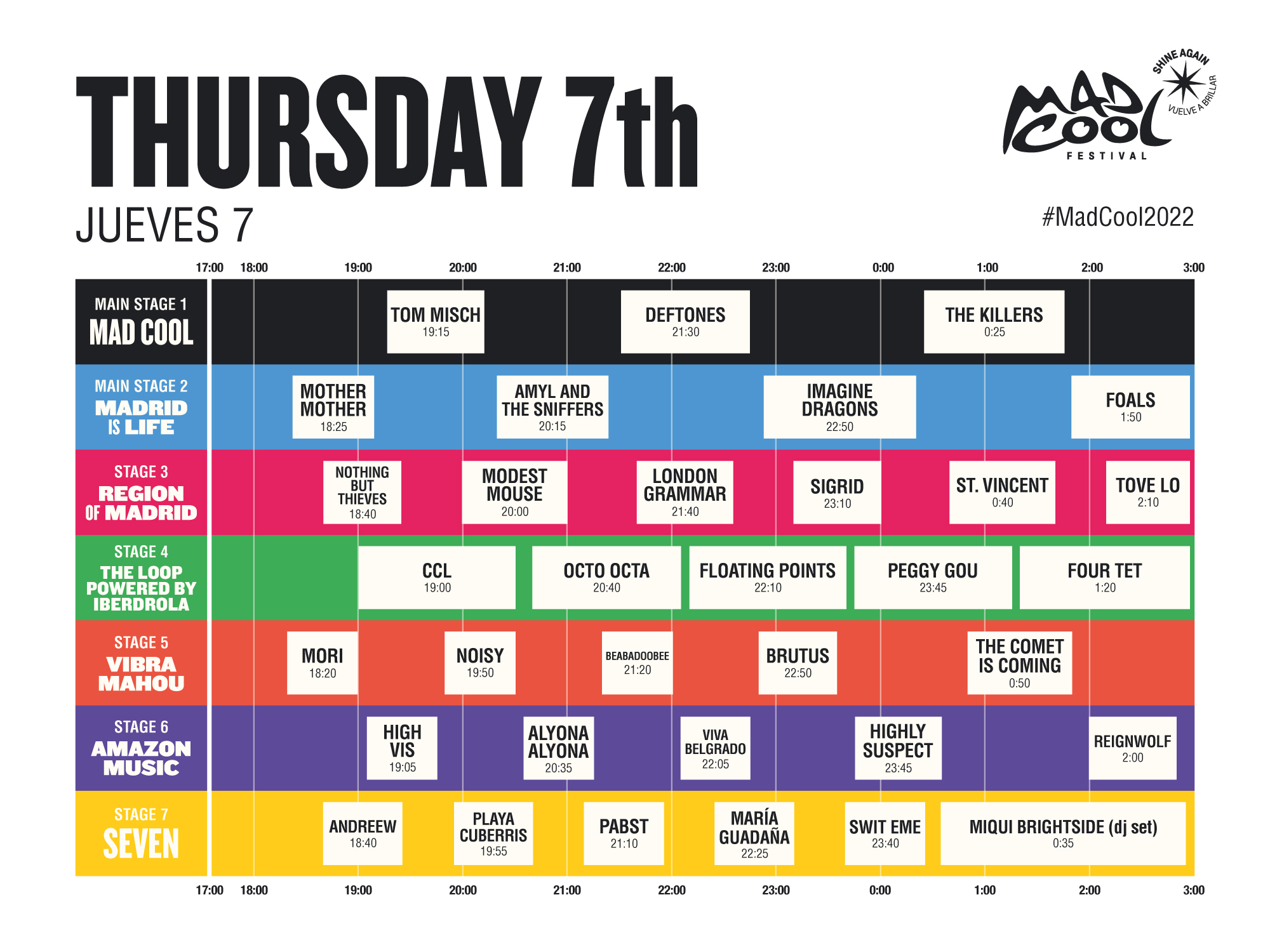 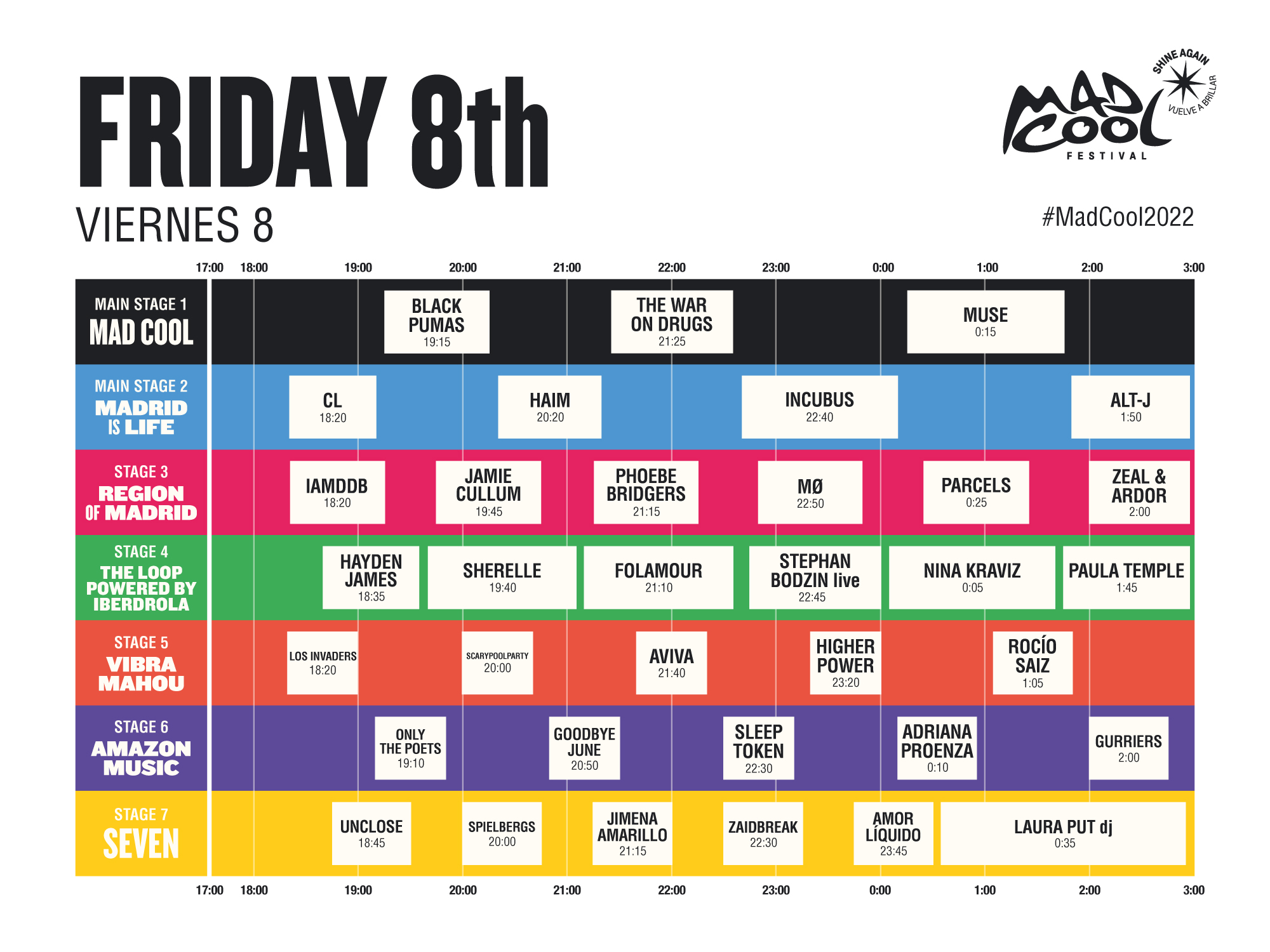 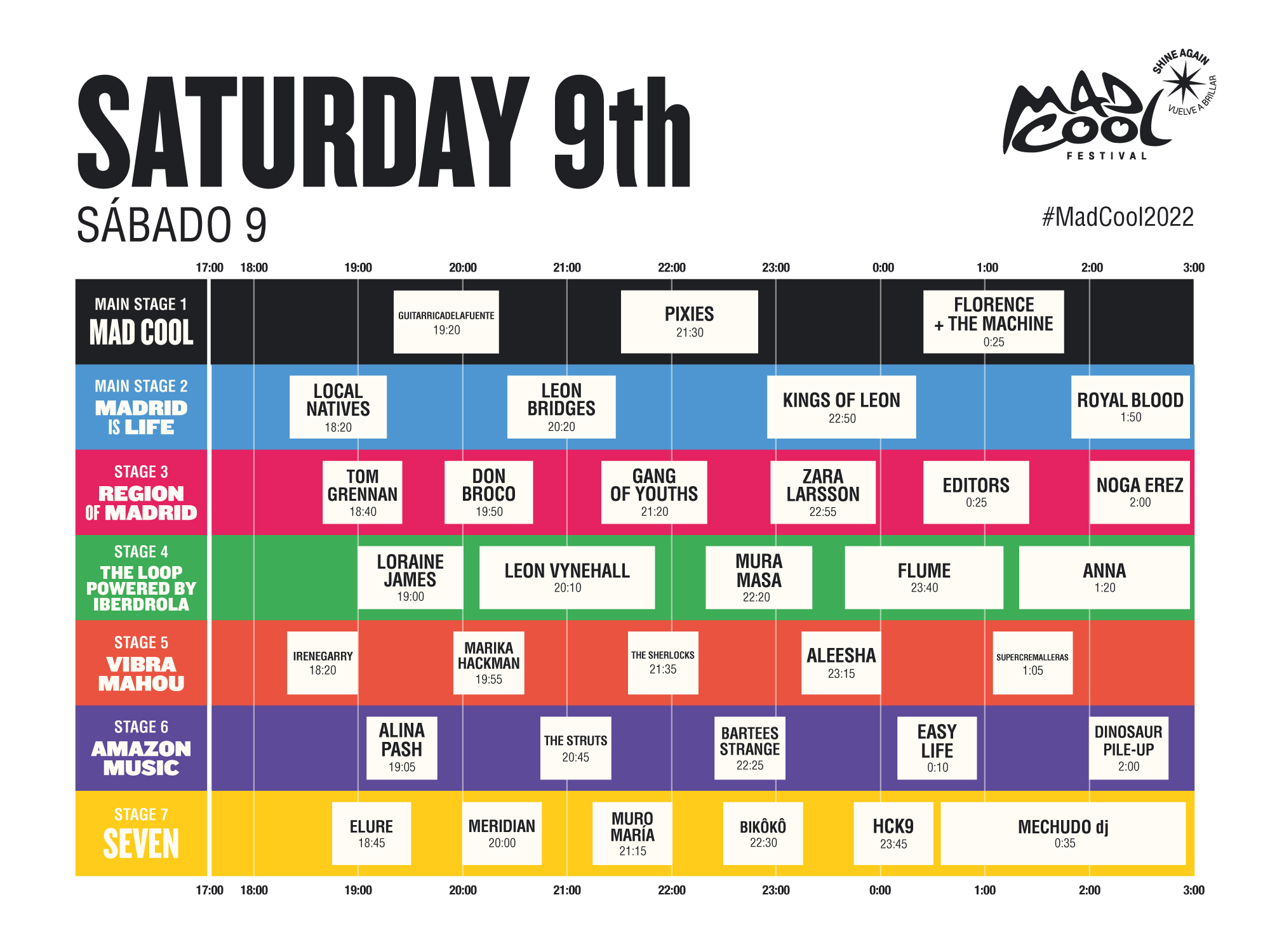 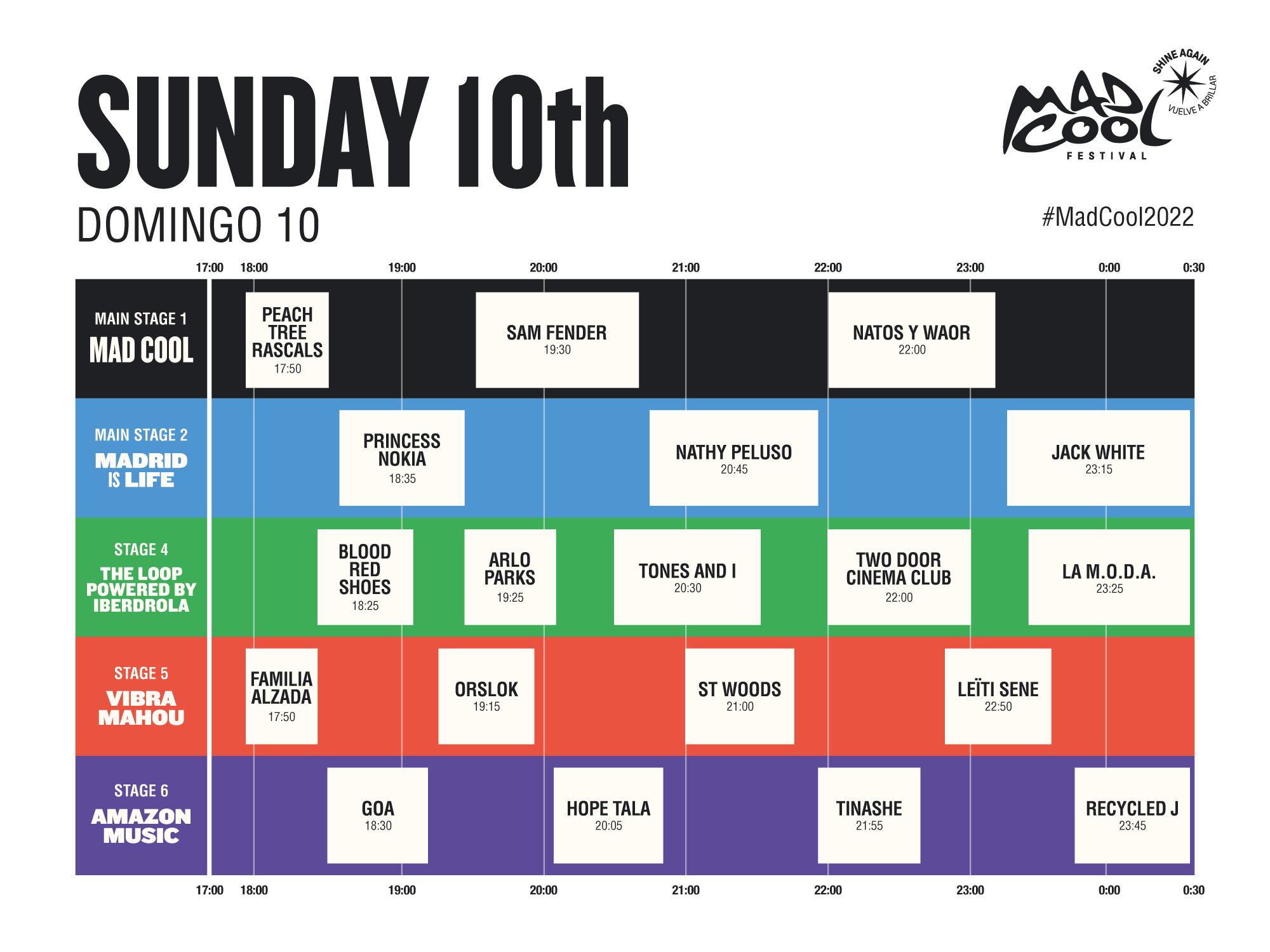 The line-up for Mad Cool 2022 was finalised last month, when Incubus replaced Queens Of The Stone Age as Friday’s third headliner. The first announcement came last June, with subsequent drops landing in October and December.

The festival runs across July 6-10 at Madrid’s Valdebebas–Ifema event space, with the full poster boasting a stonking 152 acts, including 15 headliners. Tickets for the first three days have still sold out, but are still available for the Saturday and Sunday line-ups – find them here.

2022 marks the first year that Mad Cool will be run over five days; first launching in 2016, it ran across three days for its first four editions. It would have expanded to a four-day itinerary in 2020, but that year’s edition was cancelled due to the ongoing COVID-19 pandemic. 2021’s iteration was axed for the same reason, though most of the artists announced for it were carried over to this year’s bill.

Back in April, it was announced that two further events under the Mad Cool banner – Mad Cool Sunset and the Andalucia Big Festival – would be launched later this year.

Mad Cool Sunset is a one-day concert scheduled for Saturday September 10 in Madrid, and will feature sets from Biffy Clyro, Run The Jewels, Glass Animals and more. Rage Against The Machine will headline both events, while the bill for Andalucia – set to run across September 8-10 at Sacaba Beach in Malaga – will also sport headline sets from Muse and Jamiroquai.

Let’s Eat Grandma Share New Single “Give Me a Reason”

Calvin Harris, Jack Harlow Close Out the Weekend With Pure Energy and Curveballs –...

Let’s Eat Grandma Share New Single “Give Me a Reason”